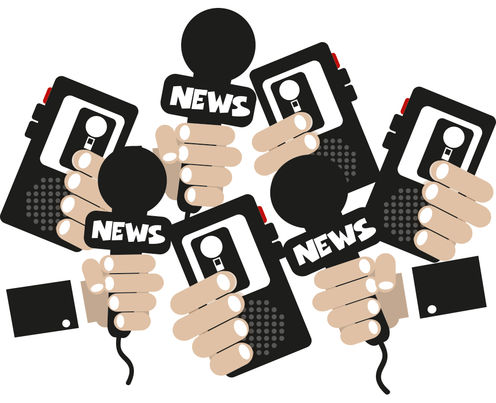 If extreme polarization is now an enduring feature of American politics — not just a bug — how does that change the game for journalists?

I have some ideas, but mainly I want to put that question on the table. “Conflict makes news,” it is often said. But when gridlock becomes the norm the conflicts are endless, infinite, predictable and just plain dull: in a way, the opposite of news.

This dynamic has already ruined the Sunday talk shows. Who can stand that spectacle anymore?

A recent task force of American Political Science Association put it this way:

The United States used to be viewed as a land of broad consensus and pragmatic politics in which sharp ideological differences were largely absent; yet, today, politics is dominated by intense party polarization and limited agreement among representatives on policy problems and solutions.

In a fascinating paper on “philanthropy in a time of polarization,” three authors — Steven Teles, Heather Hurlburt and Mark Schmitt — take up the question. They point out that leaders in these grantmaking foundations operate from assumptions that extreme polarization can be overpowered by “strong ideas and persuasive research…[that] will motivate elected officials” to act. They believe in the message of bipartisanship and urge foundations to “stay above the political fray.”

The way Obama’s health care reform became law shredded that script. Elites in Washington believed that a compromise would emerge by “combining a broad goal favored by liberals with ideas traditionally supported by conservatives.” Nothing like that went down. One side passed the bill. The other demonized it and continues the fight to this day. Teles, Hurlburt and Schmitt write:

Foundations have traditionally seen themselves as part of civil society – as mediating institutions that form a bridge between dispassionate knowledge and political advocacy. Their resources, many in the sector have hoped, could fund objective, nonpartisan research that would take the edge off partisan conflicts and pave the way for broadly accepted social progress.

That view of American politics no longer makes sense. Nothing has taken the edge off partisan warfare, least of all “objective, nonpartisan research." Is ‘objectivity’ in journalism dead ?

It’s tricky to compare foundation officers and journalists because officially the mainstream press has no theory of change, no policy agenda – indeed, no politics at all. Officially, journalists are merely out to get the story, tell the truth, inform us about what’s going on, and in special circumstances share their opinion.

But anyone who observes its work cannot help but notice that the Washington press corps shares a certain world view, analogous in many ways to the typical foundation officer’s. (Steve Coll moved easily from the Washington Post to the New America Foundation and on to the deanship of Columbia Journalism School. Walter Isaacson editor of Time magazine, CEO of CNN, is now president of the Aspen Institute.)

Here are some of the components of this shared world view. Recognize them?

And as Thomas E. Mann and Norman J. Ornstein wrote in the Washington Post:

‘Both sides do it’ or ‘There is plenty of blame to go around’ are the traditional refuges for an American news media intent on proving its lack of bias.

What if the ideological center is effectively gone? What if striking deals with insiders from both parties no longer describes the way world works? For as authors Teles, Hurlburt and Schmitt put it: “Pundits who say that ‘nothing can get done without bipartisan support’ no longer have the evidence on their side.”

What are the options?

Under these conditions, political journalists have a choice. They can try to muddle through with the framework they had before extreme polarization became too obvious to ignore. If they take this route, they will write well-informed articles about the trend. They will report the data about polarization without drawing any conclusions about their own practices. Or, they can recognize that they too have a world view, and that its assumptions have gone bust.

If they choose the latter, what then?

Instead of trying to stay in the middle between polarized extremes and avoid criticism, political journalists and their bosses could recognize that there is no escape from charges of bias because these charges are just a further aspect of polarization. If you’re going to be attacked anyway, might as well let it rip.

That’s what the Washington Post did when earlier this month it hired Chris Mooney to cover the environment in blog form. Mooney is the author of two books — The Republican War on Science and The Republican Brain (subtitle: The Science of Why They Deny Science – and Reality) — that leave no doubt about where he stands.

In announcing his appointment, the Post described Mooney as a writer with a distinctive voice and a consistent argument: “that people’s preconceptions – political, religious, cultural – color the way they view science.”

Newsrooms are better off with reporters who know their beats, nail their arguments, make clear where they’re coming from and meet high standards of verification, always. Intellectual honesty is a more reliable basis for trust than a ritualized objectivity. A clear voice is more valuable than a nonpartisan veneer.

Calling out falsehoods that have gotten traction is another thing journalists can do once they realize that extreme polarization is a feature, not a bug. Ever since the fact-checking site, Politifact, won the Pulitzer Prize for “separating rhetoric from truth to enlighten voters,” fact checking has become routine in the coverage of politics. Now the press needs to take the next step: identify the worst offenders, deny them respectability and platform, raise the cost in reputation for relying on falsehoods: in a word, fight. “Detached from the partisan fray” won’t cut it.

The non-profit investigative newsroom, ProPublica.org, calls what it does “accountability journalism.” It is the only kind of journalism ProPublica is interested in doing. Here’s how they describe it:

Our work focuses exclusively on truly important stories, stories with ‘moral force.’ We do this by producing journalism that shines a light on exploitation of the weak by the strong and on the failures of those with power to vindicate the trust placed in them.

That is a view of the world as strong as polarization is deep. Political journalists need to adopt a similar view or they will slide into irrelevance. There is one other option: savvy analysts of the game. Winners and losers, who’s up, who’s down, strategy and tactics. That really isn’t journalism, though. It’s scorekeeping.

Jay Rosen, Associate Professor, Arthur L. Carter Journalism Institute at New York University, does not work for, consult to, own shares in or receive funding from any company or organization that would benefit from this article, and has no relevant affiliations.