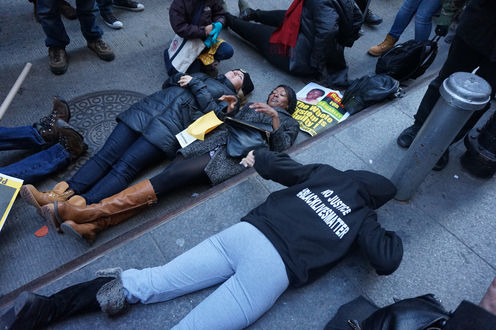 From hashtag to the streets. The All-Nite Images, CC BY-SA

The public response to the murders of Michael Brown and Eric Garner has been compared to the 1960s civil rights movement. There are many differences between what happened 50 odd years ago and today but one of the biggest is the existence of the Internet.

The Internet is often portrayed as a mobilization tool and, as demonstrated during President Barack Obama’s 2008 campaign, one capable of effective grassroots organizing.

However, I would question the true impact of the Internet upon social mobilization. In my research I investigate the relationships between various traditional and new media (including newspapers, television, film and the Internet) and society. In particular, I consider how media shape and reconfigure human interaction, collective reasoning and social policy.

I would argue that at the same time as the Internet has facilitated the creation of a network society, it has also diminished the role of centralized, organized protest as an effective weapon for social change – a role the Civil Rights Movement of the 1960s demonstrated to be effective.

Instead, the Internet provides channels for niche interests and marginalization – echo chambers where users are bombarded with similar and self-validating perspectives.

The Internet diffuses the political impact of activism

Research shows that the Internet allows us to create our own tailored media world where dissenting views and perspectives can be avoided or discounted. Because of the way social media functions, the opportunity to exercise a “uses and gratifications” approach to media consumption – an approach wherein one’s preexisting beliefs and understandings are validated – is amplified.

The Internet has become the modern day solution to the human need to be socially involved. There is, however, a possibility that the Internet has replaced the ability of social protest to evolve into social movement.

Clicking a button, sharing a picture or writing a post diffuses the political impact of social activism. What could potentially become a social movement can be decentralized. And, while protests are taking place in the street and being captured by media to mobilize the masses, as was the case in Egypt’s Tahrir Square and in other parts of the Middle East, one could argue that in the case of the #BlackLivesMatter demonstrations are reframed to become media spectacles rather than kickstarting social change.

Without question social media has provided a tool for getting the message out, but if the message creates no more than a temporary frenzy then what has been accomplished?

Those with power to make change need not respond

As has been argued, because new media has changed the nature of reporting and information access there is new pressure to create constant up-to-the minute stories and a continuous flow of new information. We are bombarded with information and unable to process or spend any serious amount of time on any one story.

Public protests and attempts at mobilization can thus be lost in the constant news stream. The point is not that politicians are ignoring social issues but rather that there is a difference between acknowledging these issues and reconfiguring public policy as a result.

To give one example, the president and political elites have acknowledged, to a certain extent, the #Blacklivesmatter protests but not in a way that has resulted – so far – in effective policy change.

My views on the current protest are shaped in part by a conversation with George Washington University political scientist and media scholar Professor Robert Entman.

Over lunch we discussed the public response to the murders of unarmed black males, Michael Brown and Eric Garner, by white police officers Darren Wilson and Daniel Pantaleo. I began our conversation enthusiastic about the exposure created by media and particularly new media around these tragedies. My view was that this was reminiscent of a time when people were willing to collectively protest, boycott, and, in some instances, even die for social change.

Dr Entman shook his head. This was not the spirit of the civil rights movement as he remembered it. He illustrated his point with a story.

The effectiveness of on-the-ground collaboration

As an undergraduate during the 1960s Dr Entman became involved in a movement to protest unequal pay policies at Duke University. Members of the largely white student body and the largely black workforce that maintained Duke’s campus – housekeepers, janitors, and grounds keepers – worked together to demand that the workforce receive minimum wage, a policy that Duke University had strategically avoided as a non-profit institution.

Understanding and responding to the position taken by Duke University administrators required the collaboration of many: members of the workforce directly impacted by these policies; members of the student body who benefited from this policy and were in this process of undermining their own privilege; and, finally, those who had been exposed to the successful strategies within the civil rights movement.

Only because of this united partnership, did the Duke administrators listen.

In the age of social media, who will lead others through this kind of process?

Addressing today’s issues requires a social movement led by scholars, politicians, clergy, and activists who are able to develop a well-articulated and tightly defined agenda for public policies and legislative change.

When we think of the current response to the use of excessive police force against black men and black communities we must ask: Who is the movement impacting? Is this the right group to target? And if the message is not resulting in change is this an indication that more centralized leadership is required?

These are questions that social media hashtags and tweets – however well intentioned and “democratic” – cannot answer.

I can think of no major, persistent social protest in the US created by new media activism. There is no cost for the powerful that would necessitate action on their part because no one is directly held accountable and no one in power is forced to make change. The online messages instead become part of the endless babble that has come to characterize the Internet. But the key to any effective policy change is rooted in the decisions of political and social elites.

What if in 1968 only white students at Duke University had decided that the support staff should not be underpaid? Would the university’s policy have remained in place? Or did true change require collective action negotiated face to face and carefully targeted towards those in power?

Today, as we post our views online and share our perspectives via social media, we must ask the same questions. Imaani El-Burki, Professor of Practice, Department of Journalism and Cmmunication at Lehigh University, does not work for, consult to, own shares in or receive funding from any company or organization that would benefit from this article, and has no relevant affiliations. This article was originally published on The Conversation. Read the original article.