Nineveh: When The Capital Of Assyria Was The Most Dazzling City In The World
By The Conversation | December 25th 2022 02:01 AM | Print | E-mail

Archaeologists in northern Iraq, working on the Mashki and Adad gate sites in Mosul that were destroyed by Islamic State in 2016, recently uncovered 2,700-year-old Assyrian reliefs. Featuring war scenes and trees, these rock carvings add to the bounty of detailed stone panels excavated from the 1840s onwards, many of which are currently held in the British Museum. They stem from the ancient city of Nineveh which, for a time, was likely the most dazzling in the world.

There is evidence of occupation at the site already by 3,000 BC, an era known as the late Uruk period. But it was under King Sennacherib (705-681 BC), son of Sargon and grandfather of Ashurbanipal, that Nineveh became the capital of Assyria, the greatest power of its day. 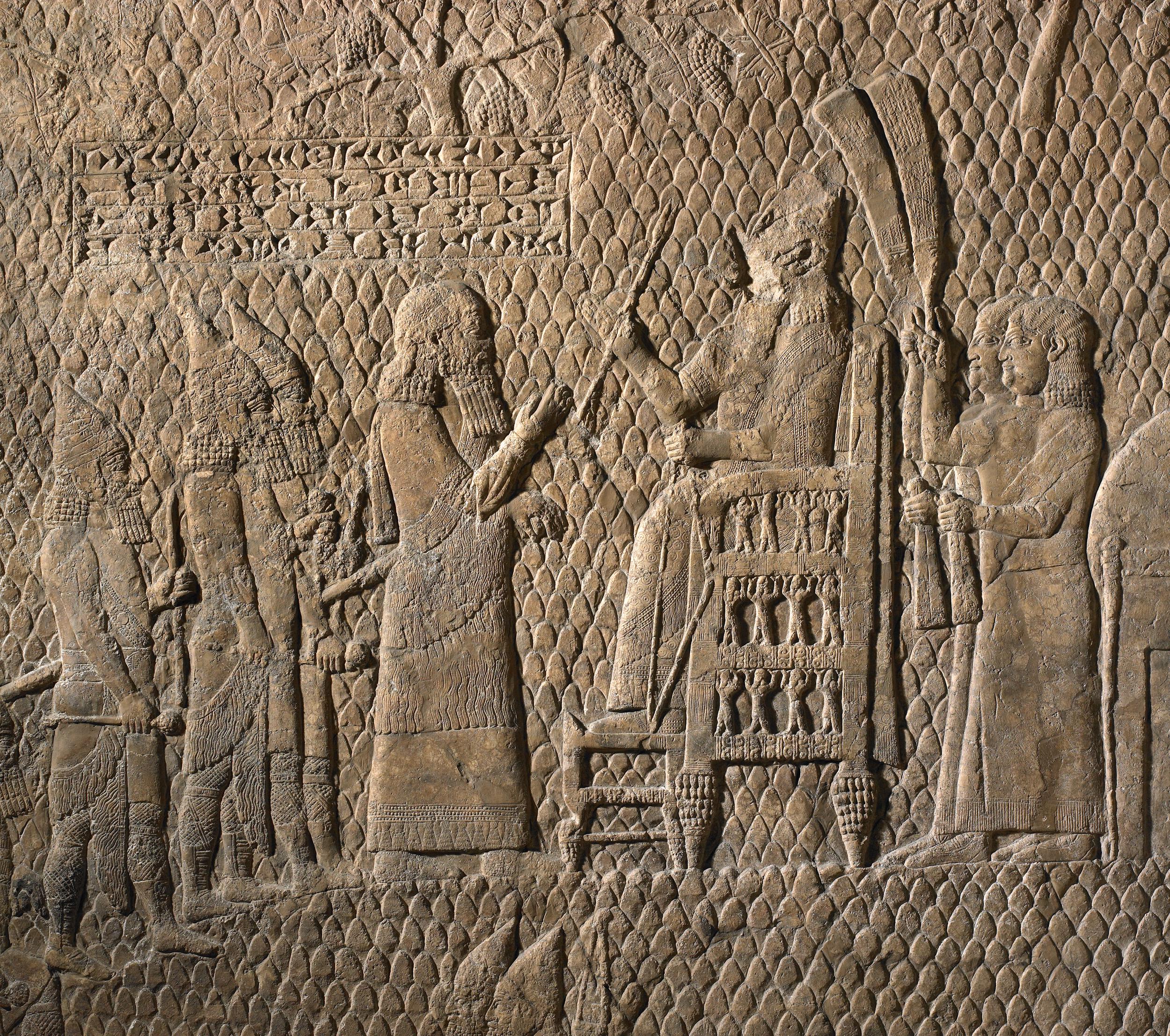 Sennacherib – his face deliberately damaged in antiquity – presides over captives from the Levantine city of Lachish. British Museum, CC BY-NC-SA

In moving the capital, Sennacherib was doing nothing new. Traditionally, the Assyrian capital was Ashur (from which we derive the word “Assyria”), but in the 800s BC the political capital had been moved to Kalhu (Nimrud). Sennacherib’s father, Sargon, had subsequently built himself a completely new capital city, Dūr Šarrukīn. 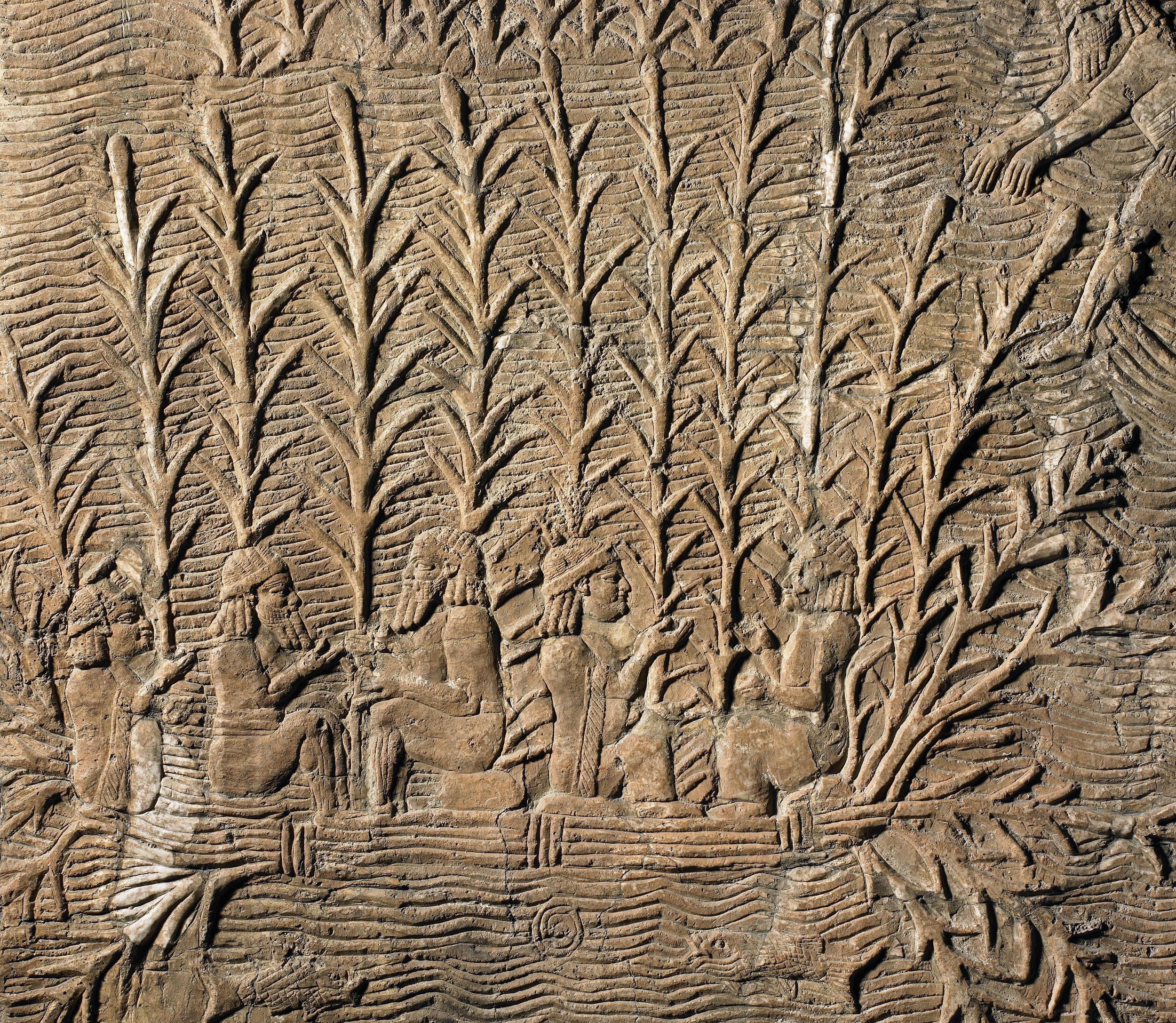 Enemies hiding in the reeds during a marshland battle. British Museum, CC BY-NC-SA

Such initiatives displayed the authority of the monarch, making a clear claim to a new order of things. They also served to move the centre of power away from the elite families whose influence had built up over time.

But moves like this could backfire. Sargon died on the battlefield and his corpse was never recovered. This national calamity was presumably a major factor that led his successor, Sennacherib, to abandon his father’s newly founded city and mark out his grandeur elsewhere.

So it was that Nineveh became synonymous with Assyrian power. When it subsequently fell to a coalition of Babylonians and Medes in 612 BC, the Israelite prophets, whose societies had suffered greatly under Assyrian aggression, could not contain their glee. 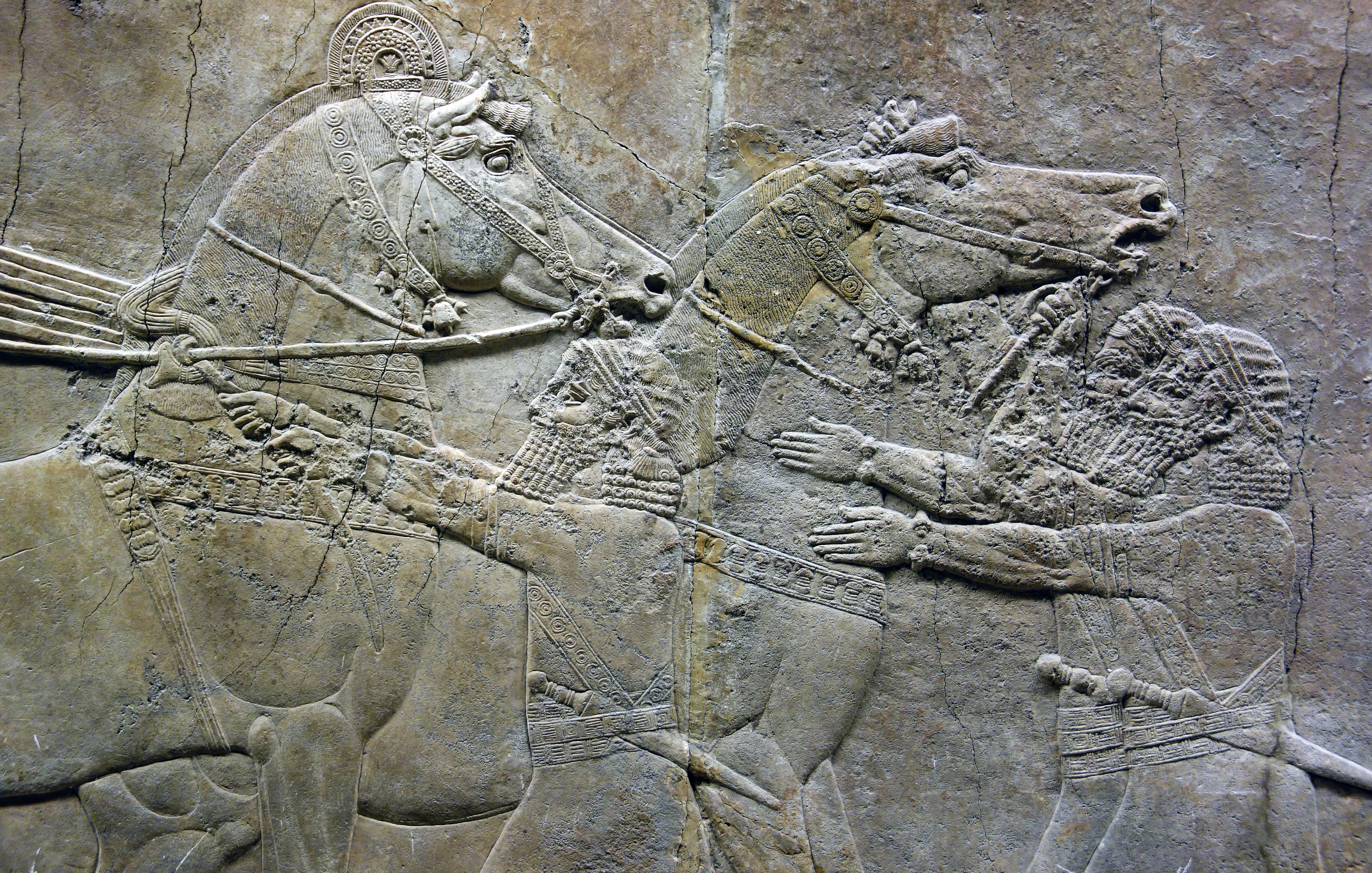 Most of the carvings we have known to date stem from earlier 19th-century excavations of the royal palace at Nineveh. Steven Zucker Smarthistory | flickr, CC BY-NC-SA

The fall of Nineveh

The biblical book of Nahum contains an extensive prophecy (albeit written after the event) about the fall of Nineveh. The book of Jonah, meanwhile, recounts that Jonah was sent to that city in order to warn the inhabitants of the dire consequences of their depravity. 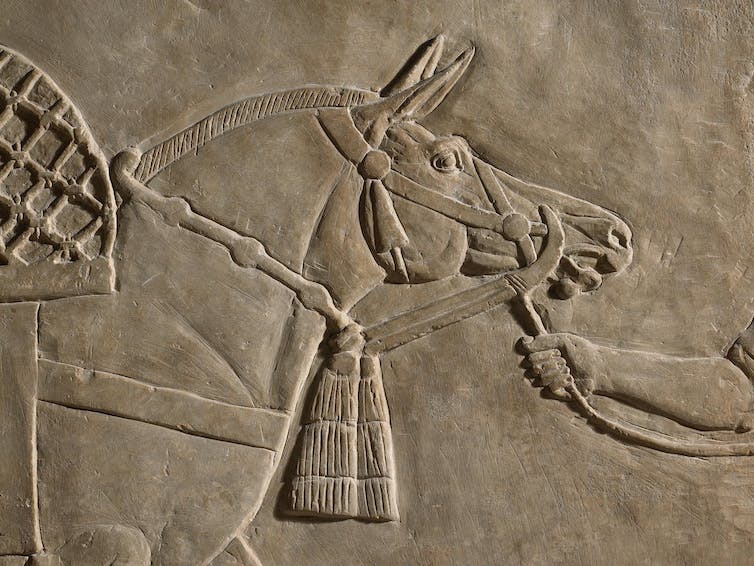 Sennacherib knew none of this. He set about making his city as magnificent as he could, surrounding it with a huge wall, the outline of which can still be seen in aerial view. Strictly speaking, the city’s limits were enclosed by two walls, an inner one and an outer one, together enclosing an area of over seven square kilometres.

The two walls were given names – “The wall whose fearsomeness covers the enemy” and “The wall that terrifies evil” – in Sumerian. They were pierced by 18 monumental entrances, including the Mashki and Adad gateways. In the city’s last days, around 612 BC, these gates were hastily narrowed in a bid to make them more defensible. As iconic parts of the ancient city, the walls and gates were targeted by Islamic State from 2014.

In antiquity, the cityscape would have been dominated by the mounds of Kuyunjik (a name acquired in the Ottoman period, probably from the Turkish koyuncuk or “little sheep”) and Nebi Yunus. These earth forms, up to 30m high, were home to ancient Assyrian temples and palaces. 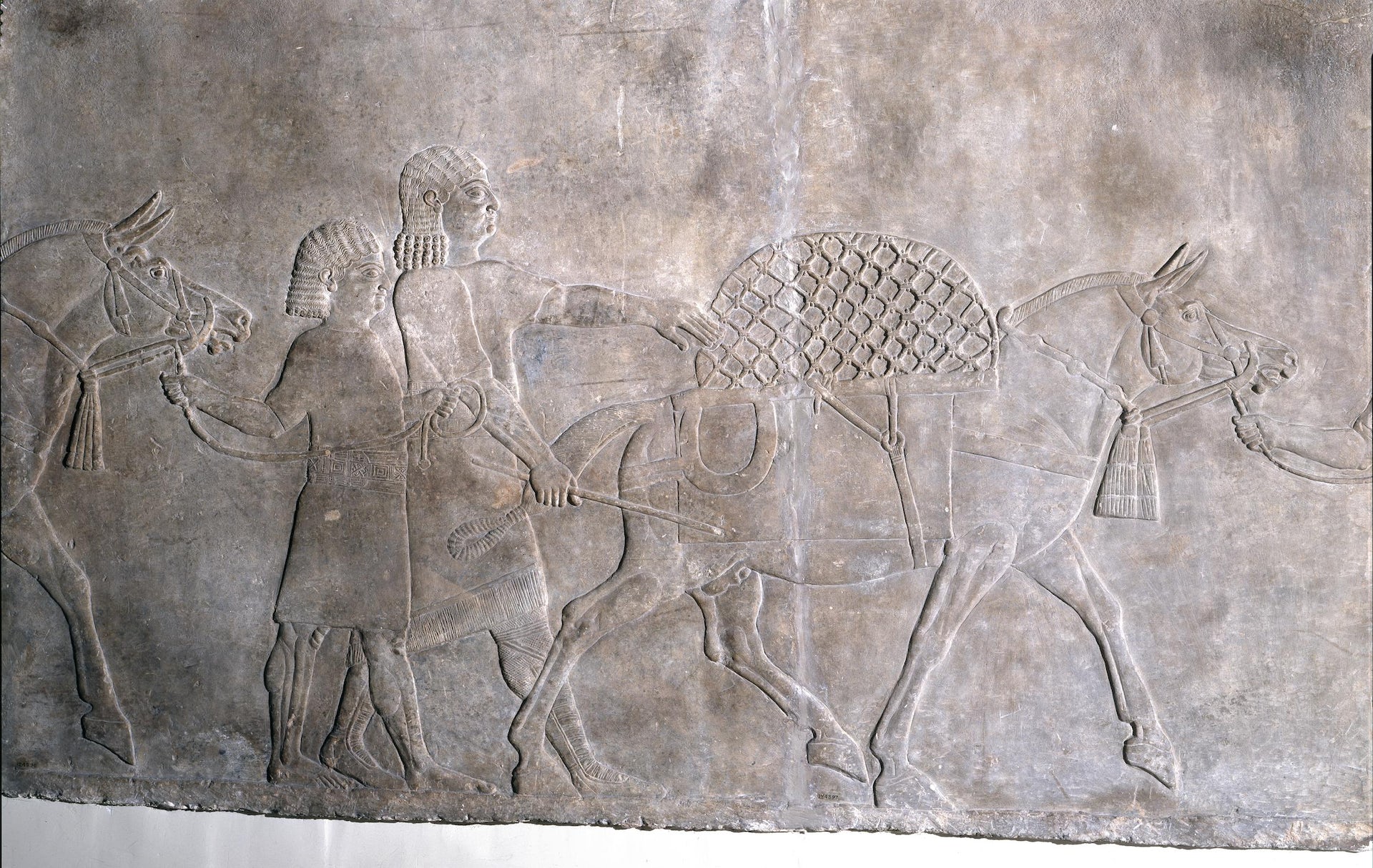 Nebi Yunus, according to Muslim tradition, houses the tomb of the prophet Jonah. Kuyunjik is where Ashurbanipal assembled his library of cuneiform tablets. Excavated between the 1840s and 1930s, this is arguably our most important source for the modern understanding of ancient Mesopotamian culture.

Sennacherib’s inscriptions on clay prisms boast that his beautification of the city also included splendid gardens. The assyriologist Stephanie Dalley, in her 2015 book The Mystery of the Hanging Garden of Babylon, suggests these were the actual source of the reports of the hanging gardens of Babylon, the Greeks having confused one Mesopotamian city with another.

Wealthy private citizens could own gardens inside the city, and all its gardens could benefit from an aqueduct which Sennacherib built to bring water from the Gomel river to the Ḫosr river. It is the only such construction known from before Roman times.

The rudimentary methods of Nineveh’s early excavators, such as the 19th-century British adventurer Austen Henry Layard, could uncover huge areas, but they were heavily concentrated on monumental buildings. They were also little more than treasure hunts with no detailed record-keeping, and so irretrievably destroyed precious information.

A relief detail showing a man carrying ropes with the hand of someone carrying a log and traces of water at the upper edge. British Museum, CC BY-NC-SA

Contemporary excavations are more cautious and thorough, which also makes them slower. As a result, most of Nineveh remains unexcavated. In particular, we know little of the “lower town” below the two mounds, where ordinary people lived. Lots of it is under modern Mosul, and there remains a huge amount to rediscover.

Written sources do, however, give glimpses of how the place must have bustled and thrived. Historian Mario Liverani, in his 2013 book The Ancient Near East, estimates that the city’s population under Sennacherib was around 100,000.

Assyrian royal inscriptions often stress the violent side of empire, such as when Ashurbanipal reports that he chained a rebel at the citadel of Nineveh together with a bear and a dog (thankfully providing no further details). But there would equally have been markets and craftsmen, diviners and festivals.

Such was the reputation of this ancient city that when explorers in the mid-19th century found the remains of spectacular cities near Mosul – which we now know to be Dūr Šarrukīn and Kalḫu – they published their finds under the titles Monument de Ninive and Nineveh and its Remains. They assumed that what they had found must be Nineveh, when it was not.

By Martin Worthington, Associate Professor in Middle Eastern Studies, Trinity College Dublin. This article is republished from The Conversation under a Creative Commons license. Read the original article.