Not The Loch Ness Monster, But A Jurassic Sea Reptile Has Been Found In Scotland
By The Conversation | January 12th 2015 04:00 PM | Print | E-mail 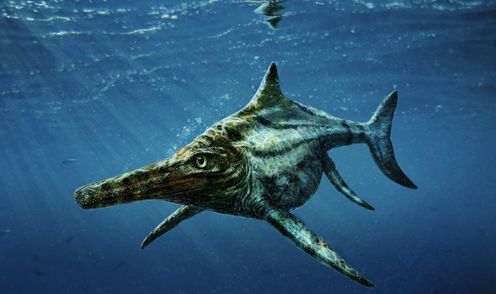 By Stephen Brusatte, University of Edinburgh

Today my colleagues and I had the great privilege to announce a remarkable new discovery: a dolphin-like reptile that prowled the Middle Jurassic waters 170 million years ago.

When you think of scientists digging up prehistoric reptiles like this, odds are a certain image comes to mind. An intrepid Indiana Jones character, fedora perched at just the right angle to block out the desert sun, brushing sand off of a perfect series of bones emerging from the ground, maybe in the western US, or the Sahara, or the Gobi.

Odds are you don’t think of Scotland, but that’s exactly where we found our beast.

And at the risk of using a cliché that will only become more tiresome over the next few months, in the run-up to the fourth installment of the popular film series due out in June, Scotland was a real Jurassic Park.

The new creature, which we named Dearcmhara shawcrossi, is an ichthyosaur, a group of extinct reptiles that were top dogs in the oceans when dinosaurs ruled the land. They weren’t quite dinosaurs, but close relatives.

The difference between Dearcmhara shawcrossi and other ichthyosaurs comes down to several very distinctive features of the upper arm bone of the flipper. One is a big triangular muscle attachment scar, the other a deep ligament pit. We’re not totally sure what function these had, other than they supported a different system of muscles and ligaments from other ichthyosaurs.

No, we have not found the ancestor of the Loch Ness Monster, as many headlines have trumpeted in the most predictable fashion. How else would you expect tabloid journalists to describe a giant water-living reptile from Scotland? What we have found is much more interesting: a four-metre-long, fish-eating, top-of-the-food-chain predator that lived more than 100 million years before Tyrannosaurus rex.

Nessie is not invited to the photoshoot. dedMazay

The new fossil isn’t the most beautiful specimen. It’s a handful of bones—including part of the flipper, back and tail, all of which you can hold in your two hands. But this is a big deal for Scotland, because it’s the first uniquely Scottish marine reptile that has ever been discovered, studied and named.

How the dino-fish was reeled in

The story behind Dearcmhara is a feel-good tale, and would perhaps make a better film than some of the dinosaur-related drivel on cable television.

Scotland is one of the best places in the world for finding Middle-Jurassic fossils, yet more than 95% of this material has just disappeared, collected by beachcombers and forgotten about. Some of it has been sold to the highest bidder, a sad state of affairs that holds back our scientific understanding of Scotland’s fossil history.

Not Dearcmhara. The fossil was collected in 1959 by an amateur collector named Brian Shawcross, along a beach called Bearreraig Bay in the northern part of the Isle of Skye. Instead of putting it on his mantle or flogging it in a car-boot sale, Brian donated the bones to the Hunterian museum in Glasgow, where they could be conserved, preserved for posterity and studied by scientists. Where the fossil was found Google Maps

As a token of thanks for Brian’s generosity, we coined the species name of the new beastie “shawcrossi” in his honor.

It took us a while to study Dearcmhara. At the time when Brian found the specimen, there wasn’t a critical mass of palaeontologists in Scotland to study new vertebrate fossil discoveries. Half century later there are researchers studying dinosaurs and other reptile fossils across the country, at the University of Edinburgh where I’m based, the National Museum of Scotland, the Hunterian Museum in Glasgow, and the Staffin Museum in Skye.

A little over a year ago, many of us came together to form a new consortium of Scottish palaeontologists, called the PalAlba group, and made it our mission to track down as many dinosaur and reptile fossils from Scotland as possible. The Pal-Alba group behind the find. Bill Crighton

What we need to know now

We want to figure out what Scotland was like during the Middle Jurassic, this mysterious interval of time from which so few fossils are known around the world. What animals lived here? What were their ecosystems like? How did they evolve over time?

And to accomplish this we need, and want, to work with amateur collectors. Academics can’t be out scouring the beaches 365 days a year looking for fossils. And most amateurs don’t have the training to preserve and study fossils.

We hope the story of Brian Shawcross resonates across Scotland: there are fossil beasts to be found, so get up and go outside, and if you find something and it’s new, please donate it to a museum and work with us to get it identified and studied.

After all, I think that having a unique new 170-million-year old fossil named after you is much better than making a few quid on eBay.

Stephen Brusatte , Chancellor's Fellow in Vertebrate Palaeontology at University of Edinburgh,
does not work for, consult to, own shares in or receive funding from any company or organisation that would benefit from this article, and has no relevant affiliations.