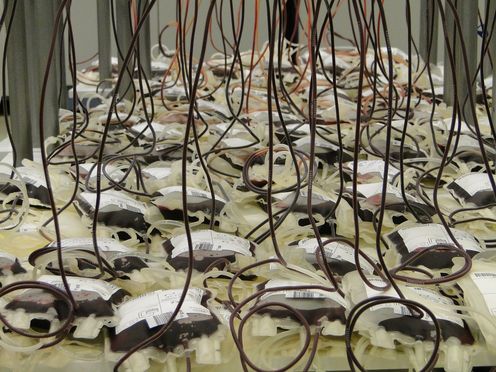 Don't bank on it. Credit: Sabinurce

By Kristine Alexander, University of Vermont

As the number of elderly people increases, so do concerns about cognitive impairment and dementia. Minor difficulties with memory and thinking can be a normal part of the ageing process, but our recent work found that people with the blood type AB may be at higher risk for significant cognitive problems than the rest of the population.

There are four main ABO blood system types: A, B, AB and O, which are determined by the presence of certain molecules (A and B antigens) on the surface of red blood cells. Of these, type AB is by far the least common, found in only about 4% of people in the US.

We used information gathered from a larger study on stroke risk factors known as the Reasons for Geographic and Racial Differences in Stroke (REGARDS) Study, which followed more than 30,000 people from around the US who were aged 45 and above, for an average of 3.4 years. In this time, 495 people developed cognitive impairment, characterized by thinking and memory problems. We compared this group with 587 individuals who did not develop cognitive problems. In the group with cognitive impairment, 6% had blood type AB, compared with 4% in the control group and in the general population.

The gene that determines ABO blood type can cause differences in factor VIII levels by affecting the clearance of a carrier protein that circulates the blood attached to factor VIII. This carrier protein is called von Willebrand factor (named after Erik von Willebrand, a Finnish doctor who first described a hereditary blood coagulation disease) and is also important for blood clotting and linked to cardiovascular disease.

The effect of blood type on coagulation proteins may be part of the connection between ABO type, cardiovascular disease, and cognition problems. However, the differences in factor VIII levels accounted for only about a fifth of extra risk of cognitive impairment we saw with blood type AB.

Blood links to other health problems

Non-O blood types have been linked to several forms of vascular disease, including heart attack and venous thromboembolism (a disease that includes deep vein thrombosis). Blood type AB, in particular, has been associated with heart disease, and our group recently published a study showing a higher risk of stroke with this blood type.

Our findings on blood type and cognitive impairment add to a growing body of evidence that cardiovascular health and brain health are closely related. Many common risk factors for heart disease and stroke are also tied to memory problems and dementia, such as diabetes, high blood pressure, and high cholesterol.

Because blood type is already known to affect the risk of cardiovascular disease, it represents another link between vascular health and brain function.

With that in mind, there is no reason to panic if you have blood type AB. There are a number of lifestyle factors that can reduce your risk of cognitive problems and dementia, and many of them have more of an impact than your blood type. Getting regular exercise, eating well and not smoking, for example, are important for both cardiovascular and brain health – and keeping blood pressure, cholesterol, and blood sugar under control will also lower your risk for these problems. Scientists recommend keeping your brain active as well, through activities like games and puzzles, and learning new skills.

Kristine Alexander, Postdoctoral Fellow of Medicine at University of Vermont, does not work for, consult to, own shares in or receive funding from any company or organization that would benefit from this article, and has no relevant affiliations.