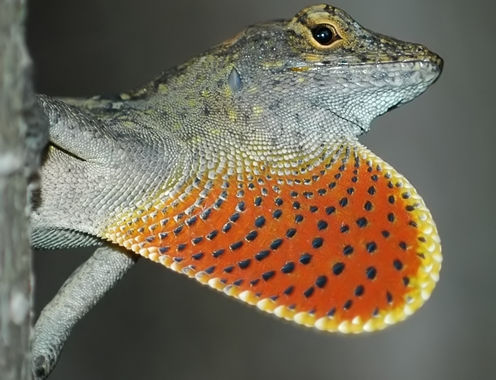 By Amanda Bates, University of Southampton

Lizards from the deserts of Australia to the tops of mountains in Costa Rica have given us insights into how animals take advantage of their environment to be less cold-blooded. Lizards seek out sunny patches or the warm underside of rocks where they can soak up the heat to enhance digestion or run faster. When it gets too hot, they can escape the heat by finding shade or retreating to burrows underground.

In particular, tropical species, including lizards, are thought to be especially vulnerable to climate warming because they already live at temperatures that can be dangerous. Without the sweat glands or metabolic control that mammals take for granted, lizards can heat up very quickly if they find themselves caught out in the sun for too long.

Species living in the tropics are also thought to have behavioral adaptations that are finely tuned to stable and predictable weather regimes, such as daily activity rhythms. Such behaviors that may be ill-suited to the increasing variability that is predicted with climate change where flexibility may be an asset.

In a world of greater climatic extremes, lizards may over-expose themselves to dangerous temperatures, or may find themselves with only a few opportunities to feed or find mates if their activity patterns are constrained to a particular window in temperatures.

This question of how animals might respond to a warmer and more variable world is the focus of a new study aimed at understanding how evolution might come into play as our climate changes. Are species’ current tolerances and behaviors fixed – or can we expect scope for rapid evolutionary change through adaptation? Will some animals be saved by evolution?

Michael Logan from Dartmouth College in the US conducted a clever experiment with his colleagues to test whether tropical lizards have the potential to change their physiology over generations to better adapt to a warmer environment, but also one that is less predictable.

The authors moved a population of brown anole lizards (Anolis sagrei) from a forested site in the Bahamas to a nearby open peninsula where daily temperatures on the ground were more than 2°C higher than the lizards were used to. They found that in a warmer and more variable climate, those lizards that survived functioned better in the heat, were fast and were also active over a broad range of temperatures.

The authors conclude that a new environment rapidly selected the lizards that were best suited to survival. They expect subsequent generations of peninsular lizards will continue with hard-wired evolutionary changes in their physiology and behavior – eventually a new form of the species may emerge, tailored to towards the hotter peninsula.

Even so, the authors do not distinguish whether the shifts in the characteristics of the peninsular lizards are genetically based, which would be a prerequisite for evolutionary change – the traits need to be heritable and passed on to subsequent generations. Indeed, there isn’t much evidence for genetic change in response to climate change.

Yet animals as diverse as pink salmon and soil mites have shown rapid evolutionary changes can occur in just a few generations, as opposed to the typical view that evolution takes hundreds of years to manifest itself. Yet even though evolution may rescue some species as the world warms, we don’t factor it in to our predictions of which plants and animals will be the most vulnerable to climate change.

There are some obvious reasons for this. While “rapid” evolution is possible, it still takes a while to unfold – longer than the duration of typical research grants and PhD programs. For some slow-reproducing species, such as those from cold polar environments or large mammals, it may take decades or more to observe. Only the most patient evolutionary biologists would devote their life to investigating how each generation of elephants has further adapted to climate change.

The capacity for evolutionary change is also tricky to predict as so much depends on context. Some populations of a particular species will contain individuals with certain characteristics – the capacity to tolerate extreme heat, say – that will allow those individuals best suited to a new environment to survive and the population to carry on, as seems to be the case in the brown anole lizards experiment. Other populations, without these adaptable individuals, will simply die out.

We presently face the most exceptional extinction rates of modern times. Rapid environmental change is already outpacing the capacity for many species to adapt and survive, but certainly some will beat climate change.

One of the big questions this research poses relates to conservation: which species can we best assist through establishing new populations and supplementing declining populations with measures such as artificial breeding programs? But this may be too narrow a focus. These fast-adapting lizards show that evolutionary change itself could yet be put to good use in conservation.

While efforts have focused on saving threatened creatures by moving populations to safer places or trying to preserve their habitats, this study shows that moving them to more extreme environments can pre-adapt populations to a warmer world. Crucially, it suggests another tool to help identify those species that will have a chance under climate change and opens the possibility that we could give some species an adaptation head start.

Amanda Bates, Lecturer in Macroecology at University of Southampton, does not work for, consult to, own shares in or receive funding from any company or organization that would benefit from this article, and has no relevant affiliations.