Scorpion Venom Could Lead To New Cancer Treatment
By The Conversation | January 6th 2015 11:31 AM | Print | E-mail 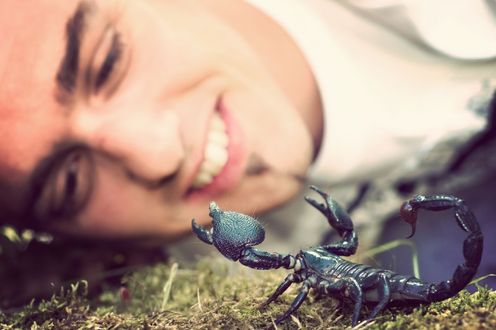 Okay, but that's not the way to extract it. fabriceh_com, CC BY-NC-SA

By Benjamin Burke, University of Hull

In the development of new drugs, taking something from nature and modifying it has been a successful tactic employed by medicinal chemists for years.

Now, with the help of nanotechnology, researchers are turning once-discarded drug candidates into usable drugs.

An estimated 40% of clinically approved drugs fall into the category where either the natural compound itself or a modified version is the approved drug. These include statins (found in bacterial secretions) used to lower cholesterol, quinines (found in cinchona trees) as anti-malarials and paclitaxel (found in yew trees) as anti-cancer medication.

Many of these natural products are toxins produced by plants or animals as a form of defense. And scorpion venom has been gaining interest as a source of new drugs. It contains a mixture of biological chemicals called peptides, some of which are known to trigger cell death by forming pores in biological membranes. Cell death can be useful if we are able to target, say, tumor cells to auto-destruct.

These toxins can have very potent effects. For instance, one particular small peptide, known as TsAP-1, isolated from the Brazilian yellow scorpion (Tityus serrulatus), has both anti-microbial and anti-cancer properties.

However, harnessing this kind of power for clinical good has so far been challenging because these toxins kill both tumours and healthy cells. One method to control such toxicity is through using nanotechnology to build specially made drug-delivery vehicles. If successful, the toxic drug is released to kill only unwanted tissues in a body.

One such attempt has been made by Dipanjan Pan at the University of Illinois at Urbana-Champagne. In a study published in the journal Chemical Communications, scientists claim to have created spherical capsules to trap scorpion venom toxin TsAP-1. This encapsulated toxin, named NanoVenin, increases the drugs effectiveness at killing breast cancer cells by ten times.

This is an interesting development for two reasons. Firstly, the venom toxin in its natural form could not be used due to the lack of specificity and, secondly, the incorporation of the venom toxin in the nanoparticle caused a large increase in the drug’s potency, making it more clinically useful.

This form of the drug works on breast cancer cells, but it is not disease-specific yet. Researchers can modify its outer shell by, for example, attaching proteins that can make it selective towards certain types of cancers. It may also be possible to coat the nanoparticle in a biodegradable layer so as to trap its toxicity until it reaches the diseased area, where the layer degrades to reveal the toxin.

Such precise delivery can work on a “lock-and-key system” of highly precise biological structures. For instance, different types of cancer cells have characteristic secretions or outer proteins – the biodegradable layer of the drug can be built to recognize these specific secretions or proteins and then trigger the degradation process, allowing precise delivery of the drug.

Often effective drugs have been discovered but not commercialized due to delivery issues. Yet the latest developments in nanotechnology illustrate how once discarded drugs sourced from natural compounds can be brought off the shelf to fight disease.

Benjamin Burke, Molecular Imaging Post-Doctoral Research Assistant at University of Hull, does not work for, consult to, own shares in or receive funding from any company or organization that would benefit from this article, and has no relevant affiliations.