Sepsis Is Largely Unknown But It Puts One Million People In The Hospital Each Year
By The Conversation | July 1st 2015 12:30 PM | Print | E-mail 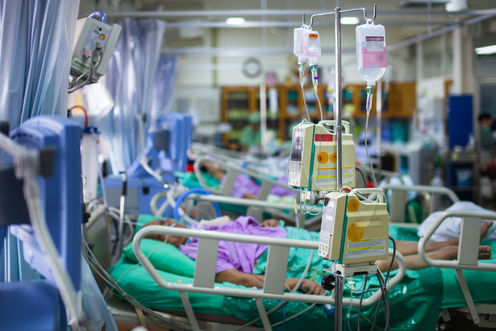 Most Americans have never heard of it, but according to new federal data, sepsis is the most expensive cause of hospitalization in the US.

Sepsis is a complication of infection that leads to organ failure. One million patients are hospitalized for sepsis each year (across all types of health insurance). This is more than the number of hospitalizations for heart attack and stroke combined. Sepsis can be a particular risk for older people. In 2013 alone, 400,000 Medicare beneficiaries were hospitalized because of sepsis at a cost of US$5.5 billion.

And it is deadly. Between one in eight and one in four patients with sepsis will die during hospitalization. In fact sepsis contributes to one-third to one-half of all in-hospital deaths.

Despite these grave consequences, fewer than half of Americans know what the word sepsis means.

What is sepsis and why is it so dangerous?

Sepsis a severe health problem sparked by your body’s reaction to infection. When you get an infection, your body fights back, releasing chemicals into the bloodstream to kill the harmful bacteria or viruses. When this process works the way it is supposed to, your body takes care of the infection and you get better. With sepsis, the chemicals from your body’s own defenses trigger inflammatory responses, which can impair blood flow to organs, like the brain, heart or kidneys. This in turn can lead to organ failure and tissue damage.

Sepsis can result from any type of infection. Most commonly, it starts as a pneumonia, urinary tract or intra-abdominal infection such as appendicitis. It is sometimes referred to as “blood poisoning,” but this is not an accurate term. Blood poisoning is an infection present in the blood, while sepsis refers to the body’s response to any infection, wherever it is.

Once a person is diagnosed with sepsis, she will be treated with antibiotics, IV fluids and support for failing organs, such as dialysis or mechanical ventilation. This usually means a person needs to be hospitalized, often in an ICU. Sometimes the source of the infection must be removed, as with appendicitis or an infected medical device.

Part of the problem we face with sepsis is agreeing on just what it is, from a medical standpoint. Experts last defined sepsis in 2001.

However, recent studies suggest the current definition does a poor job distinguishing sepsis from other diseases that can make one very sick. Many conditions can mimic sepsis, including severe allergic reactions, bleeding, heart attacks, blood clots and medication overdoses. Sepsis requires particular prompt treatments, so getting the diagnosis right matters. The revolving door of sepsis care

As recently as a decade ago, doctors believed that sepsis patients were out of the woods if they could just survive to hospital discharge. But that isn’t the case – 40% of sepsis patients go back into the hospital within just three months of heading home, creating a “revolving door” that gets costlier and riskier each time, as patients get weaker and weaker with each hospital stay.

If sepsis wasnt’t bad enough, it can lead to another health problem: Post-Intensive Care Syndrome (PICS), a chronic health condition that arises from critical illness. Common symptoms include weakness, forgetfulness, anxiety and depression.

Post-Intensive Care Syndrome and frequent hospital re-admissions mean that we have dramatically underestimated how much sepsis care costs. On top of the $5.5 billion we now spend on initial hospitalization for sepsis, we must add untold billions in re-hospitalizations, nursing home and professional in-home care, and unpaid care provided by devoted spouses and families at home.

Unfortunately, progress in improving sepsis care has lagged behind improvements in cancer and heart care, as attention has shifted to the treatment of chronic diseases.

Raising public awareness increases the likelihood that patients will get to the hospital quickly when they are developing sepsis. This in turn allows prompt treatment, which lowers the risk of long-term problems.

Beyond increasing public awareness, doctors and policymakers are also working to improve the care of sepsis once patients get to the hospital.

Several physician groups are collaborating to develop a new prediction tool called qSOFA. This instrument identifies patients with infection who are at high risk of death or prolonged intensive care. In contrast to existing methods for identifying sepsis, the new tool is data-driven. It was developed through examining millions of electronic patient records.

Researchers are also refining a mainstay of sepsis treatment – antibiotic therapy. These medications must be given within hours of diagnosis, but how long they are needed is unclear.

Newer studies indicate that shorter treatment courses may be as effective as longer courses, while potentially limiting disruption to healthy bacteria living on and within us.

Preliminary research by us and our colleagues suggests that the risk for sepsis is temporarily increased when healthy bacteria are disturbed. This raises the intriguing possibility that diet or supplements aimed at restoring healthy bacteria may reduce the risk of future sepsis. Even with great inpatient care, some survivors will still have problems after sepsis, such as memory loss and weakness.

Doctors are wrestling with how to best care for the growing number of sepsis survivors in the short and long term. This is no easy task, but there are several exciting developments in this area.

The Society of Critical Care Medicine’s THRIVE initiative is now building a network of support groups for patients and families after critical illness. THRIVE will forge new ways for survivors to work with each other, like how cancer patients provide each other advice and support.

As medical care is increasingly complex, many doctors contribute to a patient’s care for just a week or two. Electronic health records let doctors see how the sepsis hospitalization fits into the broader picture – which in turn helps doctors counsel patients and family members on what to expect going forward.

The high number of repeat hospitalizations after sepsis suggests another opportunity for improving care. We could analyze data about patients with sepsis to target the right interventions to each individual patient.

In 2012, New York State passed regulations to require every hospital to have a formal plan for identifying sepsis and providing prompt treatment. It is too early to tell if this is a strong enough intervention to make things better. However, it serves as a clarion call for hospitals to end the neglect of sepsis.

The Centers for Medicare&Medicaid Services (CMS) are also working to improve sepsis care. Starting in 2017, CMS will adjust hospital payments by quality of sepsis treatment. Hospitals with good report cards will be paid more, while hospitals with poor marks will be paid less.

To judge the quality of sepsis care, CMS will require hospitals to publicly report compliance with National Quality Forum’s “Sepsis Management Bundle.” This includes a handful of proven practices such as heavy-duty antibiotics and intravenous fluids.

While policy fixes are notorious for producing unintended consequences, the reporting mandate is certainly a step in the right direction.

Right now, sepsis care varies greatly from hospital to hospital, and patient to patient. But as data, dollars and awareness converge, we may be at a tipping point that will help patients get the best care, while making the best use of our health care dollars.