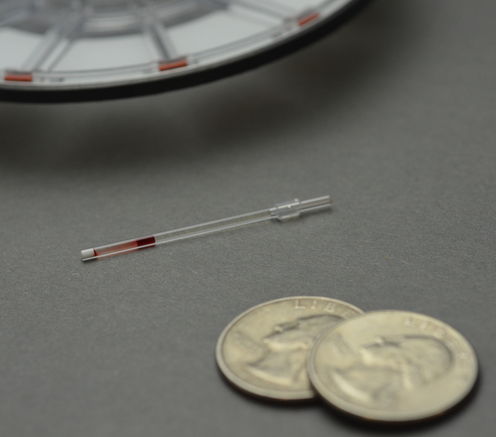 A simple solution to a persistent problem. Credit: Ashok A. Kumar

By Ashok A. Kumar, Harvard University

Every year, 300,000 children are born with sickle-cell disease, primarily in Africa and India.

It is a genetic disorder that causes some blood cells to become abnormally shaped. The result is that those who suffer from it have a shorter lifespan.

The disease can be managed if it is diagnosed early, which means it rarely kills in rich countries, such as the US. But in sub-Saharan Africa, where it is most prevalent, most children with the disease still die before their fifth birthday.

The tools needed to diagnose sickle-cell disease, while not expensive by western standards, are often out of reach for hospitals and clinics in areas without established infrastructure. That is why it remains a serious threat.

We are at the early stages of developing a new method that seeks to address this problem. The method, published in a paper in the journal Proceedings of the National Academy of Sciences, involves using a low-cost system to measure the density of blood cells – which is a potential way to identify sickle-cell disease.

The system separates cells from a blood sample using aqueous multiphase systems – mixtures of polymers in water that separate into phases similar to how oil and water separate. These mixtures can automatically form multiple layers of liquids with the least dense liquid on top and the densest on the bottom. When cells are placed on top of these systems, they will sink through layers until they encounter one that has a matching or higher density. This matching can be used to diagnose the disease.

Sickle-cell disease occurs when a child inherits a mutated gene from both parents. It gets its name from the abnormal shape of the red blood cells found in sufferers. Instead of forming discs these blood cells are shaped like a sickle in a flattened C-shape. The process that causes these cells to form such a shape also causes them to become more dense than the cells found in normal blood. So if we detect a cell that is denser than the average using our system, we have a good indication that the patient has the disease.

The process of running a test is simple and cheap. The measuring device can be preloaded into a small plastic tube the size of a toothpick. A drop of blood from a fingerprick is applied and the test is spun in a small, portable centrifuge for ten minutes. This forces the cells to fall from the top of the tube and move through the liquid layers formed by the aqueous polymers. The results can be read by eye and the cost of producing each test, including materials, packaging and labor, is about US$0.50.

This device is simple but has the potential to have a big impact. Hematology is not often available to doctors and healthcare workers in areas short of resources. And these are the areas that most need to be able to carry out vital tests.

Blood is difficult to work with because its cells are sensitive to environmental change and tools to manipulate them often require expensive infrastructure. Routine analysis of blood is done by manipulating blood cells to flow, single-file down a tube and then examining each cell with light from lasers.

If blood manipulation could be done using this 50-cent test, hematology could be done at a patient’s local medical facility, without the need for them to travel to a larger hospital.

A rapid diagnostic for sickle-cell disease has the potential to save many lives each year. Separating dense cells from whole blood in sickle-cell disease is the first application of density-based separations of cells in aqueous multiphase systems. And if it works for red blood cells, it could be used in the future to separate other kinds of cell according to density – such as cancer cells or parasites.

Ashok A. Kumar, Postdoctoral Fellow at Harvard University, does not work for, consult to, own shares in or receive funding from any company or organization that would benefit from this article, and has no relevant affiliations.