The Handmaid’s Tale is a TV series based on the 1985 novel of the same name by Margaret Atwood that presents a dystopian vision of a male-dominated society known as Gilead.

Widespread infertility means that the few fertile women who remain have been enslaved as handmaids and assigned to Gilead’s leaders to produce their future offspring. The series follows the struggles of June, who was separated from her family and forced to become a handmaid.

But just what is a reference to the evolutionist Charles Darwin doing in an episode of The Handmaid’s Tale? 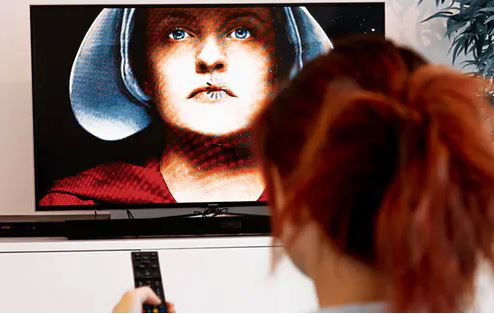 As a historian of science currently writing a book on the Darwinian Revolution, I am intrigued by Darwin’s connection with this fictional society.


A trailer for the third season of The Handmaid’s Tale.

‘Women can be useful’

The third episode of season 3, titled “Useful,” finds June assigned to Joseph Lawrence, a high-ranking commander in Gilead. As Lawrence hosts a meeting of Gilead’s leaders in his drawing room, the men discuss what to do about recently captured female insurgents.

Should they be forced into hard labour in the Colonies or be publicly executed? Commander Lawrence, however, finds neither of these options appealing. The realities of the widespread infertility that spurred the regime’s existence suggests that some of the intransigent women might be useful after all.

Lawrence then tells June to get a book from his bookcase that will help the leadership group better understand “an individual’s value in the world as it pertains to gender.” The book in question is Charles Darwin’s Descent of Man, which Lawrence calls “an oldie but a goodie.”

After June hands the book to Lawrence, he then exclaims to his powerful guests: “See? Women can be useful.” 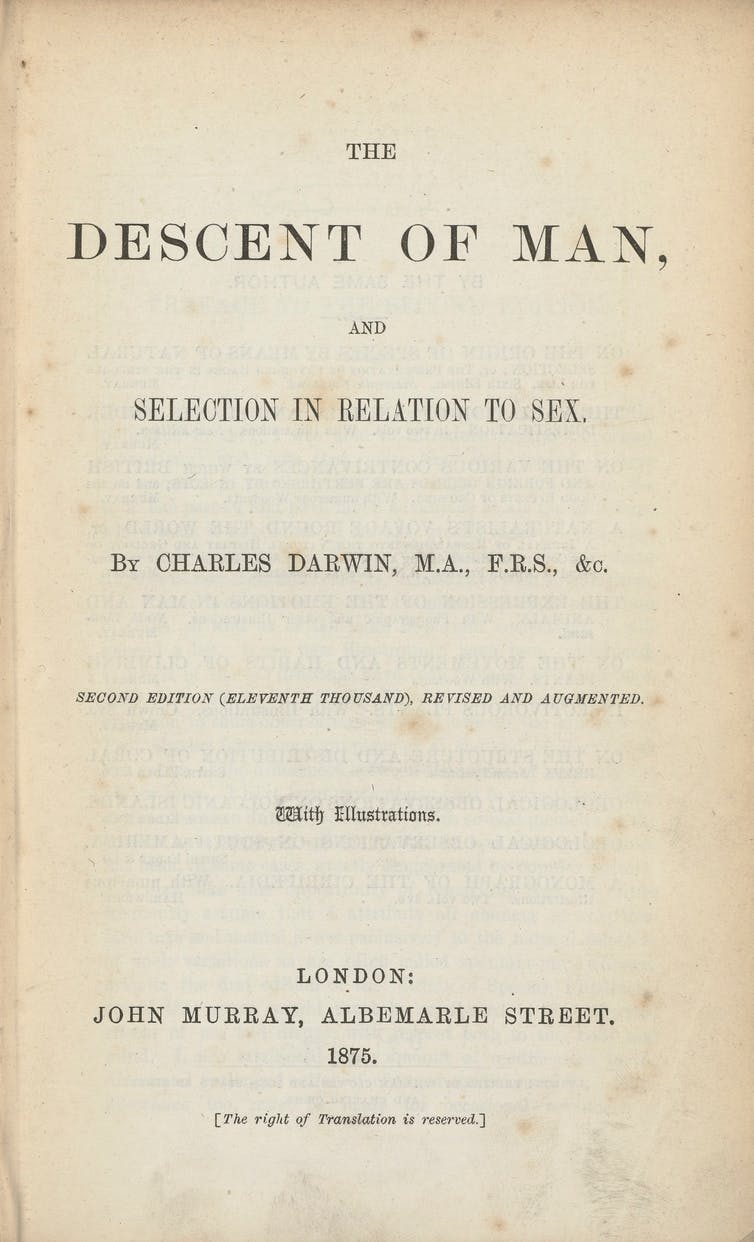 Far from being a throwaway remark, the reference to Darwin’s Descent of Man in this scene is highly suggestive. While Darwin’s 1859 On the Origin of Species is much more widely read and appreciated as establishing evolution as a science, Darwin did not write specifically about human evolution until 1871 when The Descent of Man and Selection in Relation to Sex was published. In this book, Darwin put forward his theory of sexual selection.

Today, Darwin’s theory of sexual selection is often used to explain the bright and brilliant plumage typical of male birds of paradise, along with their often bizarre mating rituals meant to entice females. While Darwin spent several chapters discussing the esthetic senses of birds that led to such interesting evolutionary adaptations, he did not limit his application of sexual selection to birds alone. 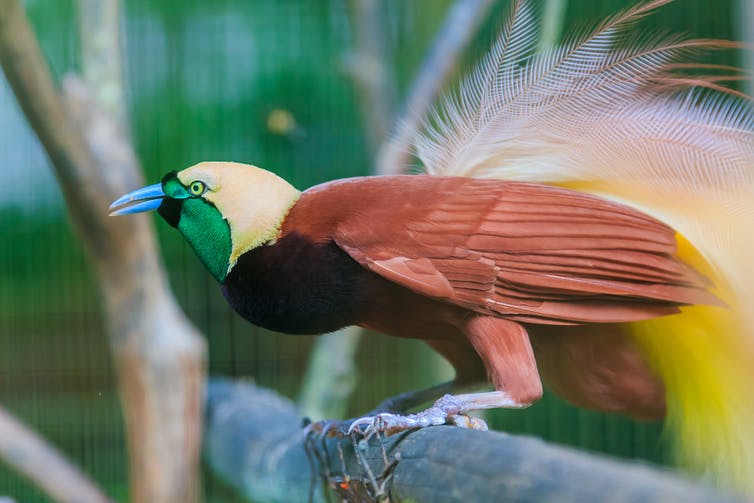 Darwin explained the ostentatious displays of male birds - like this lesser bird-of-paradise - as a way to attract females and ensure genetic continuation. (Shutterstock)

Science historian Evelleen Richards explains that Darwin believed that his theory of sexual selection could account for important aspects of human evolution as well, such as the physical and mental distinctions between men and women.

As Richards shows, when it came to issues of gender (and race for that matter), Darwin was very much a man of his time, and this fact shaped his evolutionary views. He argued that there was a vast distinction between the intellectual capabilities of men and women, believing that men were ultimately superior:

“The chief distinction in the intellectual powers of the two sexes is shewn by man attaining to a higher eminence, in whatever he takes up, than woman can attain — whether requiring deep thought, reason or imagination, or merely the use of the senses and hands.”

This distinction could be explained, according to Darwin, by the fact that men had to struggle against one another in the contest for mates, whereas women were largely passive. Through this struggle, men acquired certain intellectual capabilities late in their development, capabilities that were then only passed on to male offspring.

Because of this, the mental state of women was arrested in time and “characteristic,” as Darwin put it, “of the lower races, and therefore of a past and lower state of civilization.” 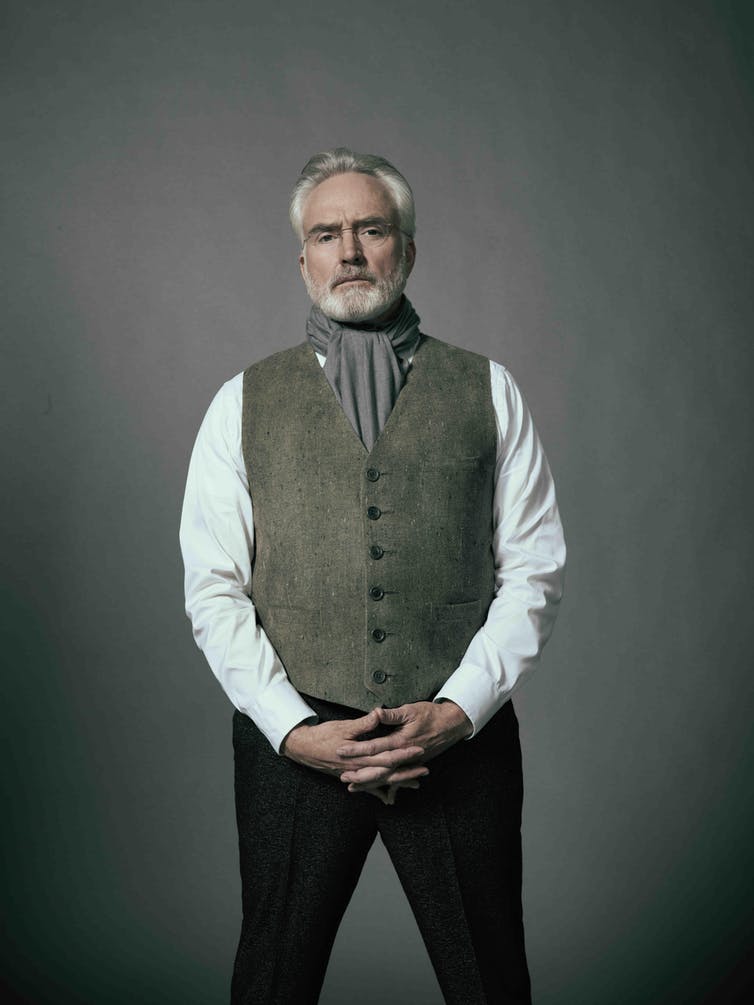 Commander Joseph Lawrence is played by the actor Bradley Whitford; in the show, Commander Lawrence is a high-ranking official. (Hulu Press)

It followed for Darwin that it would be a waste of resources to bring women up to the intellectual level of men. Women should, therefore, fully embrace their maternal instincts, raise children and establish happy homes.

Darwin’s wife Emma did exactly that, creating a comfortable home for Darwin to pursue his scientific endeavours while giving birth to 10 children, with the last one born when she was 48 years old.

In many ways, The Handmaid’s Tale presents a society that is reduced to the gender stereotypes that were inscribed in Darwin’s theory of sexual selection. Women are useful only in so far as they can reproduce. And those who can, like June, are essentially made sexual slaves to the powerful. Men, meanwhile, are physically and intellectually in control of the levers of power.

When Commander Lawrence tells June to get Descent of Man from the bookshelf, he is reminding her that she can be useful, but only from within the narrow sphere defined by her biology. The Handmaid’s Tale, of course, is ultimately critical of such gender determinism, as the development of June herself makes clear.

But the politics of biology is not just a relic of the 19th century or the product of science fiction. Philosopher Cordelia Fine shows that there are still many evolutionary scientists who hold that the inequality between the sexes is natural, not cultural.

On the surface, therefore, Gilead may look like an unrealistic society that chose to embrace its most extreme views about gender in order to survive. But the brilliance of The Handmaid’s Tale is in showing that many of those views, in certain contexts, are actually not so radical, and can even be found in classic biology texts.

This all suggests that the reference to Darwin’s Descent of Man in The Handmaid’s Tale is not only relevant but even necessary.

By Ian Hesketh, ARC Future Fellow, The University of Queensland. Ian Hesketh holds an Australian Research Council Future Fellowship grant FT170100194, entitled "The Place of History in Science: Reassessing the Darwinian Revolution." This article is republished from The Conversation under a Creative Commons license. Read the original article.