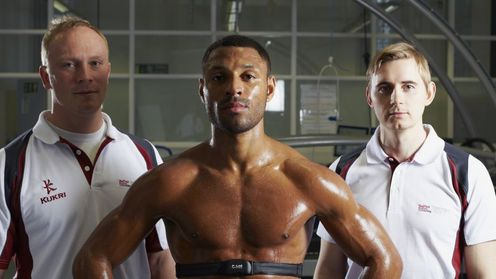 Amid all the flashing lights, it was a moment of sheer exhilaration when the winner was finally announced: “By a majority decision, the new IBF welterweight champion on the world – Kell Brook.”

Now if you’re not a boxing fan you may not be familiar with Brook, but he’s the first British boxer in 28 years to win a world title in the US from an unbeaten American fighter, Shawn “Showtime” Porter.

Brook’s victory was the culmination of 20 years of hard work and support – and of course a sprinkling of science courtesy of his team from Sheffield Hallam University. I’ve been Brook’s sports scientist for two years.

There’s no escaping that boxing can be brutal - it’s a fight after all. And like other sports, the path to world dominance is rarely a series of successive linear steps. Two years ago, Brook fought another American fighter Carson Jones, then the world number three. It was meant to be a routine fight (if you can ever really have one) but Jones had other ideas and took Brook to the full 12 rounds in a brutal encounter that saw both fighters hospitalized after the contest. Brook ultimately won on points but the cost was high: he required serious medical treatment. We were called in to bring together his physical and mental potential for the next fight – one that would give him a shot at competing for the world title.

With the help of Brook’s trainer, Dominic Ingle, we put together a small team of experts in strength and conditioning, physiology, nutrition and psychology to help prepare him for his upcoming contest against an Argentinian called Hector Saldivia.

One of the first steps in the scientific support process is to understand the demands of the sport. In most disciplines, there is a weight of evidence in peer-reviewed scientific journals that describe the demands of the particular sport – for example in football – but there wasn’t for professional boxing so we began building our own information.

We observed Brook’s sparring and collected heart-rate and lactate data (this measures the amount of lactate, or lactic acid, a metabolic product produced by the body during exercise, which gives us an indication of the intensity of exercise). We had extensive discussions with Ingle about the demands of the sport. When Brook visited our sport science laboratories we could then perform tests that would isolate specific components of the way his body uses energy to analyze and evaluate his strengths and weaknesses.

For strength and conditioning we focused on movement patterns and mobility before building strength endurance and later strength. In physiology we focused on developing Brook’s aerobic capacity using a range of high intensity interval training sessions and introduced heart-rate monitoring.

In addition to adjusting Brook’s diet to meet the demands of training and recovery – he sometimes ate steak and eggs for breakfast, and his meals were well timed with carbohydrates measured to the gram to help recovery – we also helped him build psychological skills like relaxation, mental imagery, where you imagine the event or your performance and view it either from the first or third person, for example, and picture the perfect performance. Focusing attention during competition came through breathing techniques.

These new elements in Brook’s preparation were slotted in between his boxing training and other requirements and the whole process was tightly managed by Ingle.

Turning up the heat

Hector Saldivia was stopped in the third round by a stiff left-handed jab from Brook. Our support continued and we refined our training and testing processes with a number of victories and difficulties along the way.

During the 16-week period preparing for his fight against Porter, Brook and the Ingle team spent almost half of the time in Fuerteventura and the final three weeks in the Top Rank gym in Las Vegas where the heat rose to 37.5°C and 25% humidity – perfect conditioning for the heat of battle in California.

There are many physiological and psychological benefits to training in hot conditions including beneficial changes to skin blood flow, metabolic rate, the cardiovascular system, fluid balance, specific cellular adaptations and improved thermal comfort. But it can also strain the body; these final preparations in the heat likely caused Brook’s acute fatigue a week before the world-title fight that led to five days of rest and super compensation – accelerated physiological adaptations after a period of intense training – before the weigh-in and competition.

Close to the chest

In the highly competitive world of boxing – and indeed other sports – boxers, trainers, managers are keen to keep individual training regimes a closely guarded secret. But for Brook, we placed great emphasis on recovery and rest required for training adaptation as well acute strategies, short-term pre-fight routines that are known to enhance performance, prior to his fight. As was tweeted, our “game plan” also included cue words to help focus Brook and our team before and during the fight.

I’m a sport scientist and it’s my job to use scientific principles to prepare athletes for competition. But without the hard work and dedication of Brook, a forward thinking coach and a close, supporting team, no amount of science would have made a winner.

Alan Ruddock, Associate Lecturer in Exercise Physiology at Sheffield Hallam University, does not work for, consult to, own shares in or receive funding from any company or organization that would benefit from this article, and has no relevant affiliations.