The World's Continents Weren't Always Created In The Way That We Thought
By The Conversation | October 23rd 2014 12:01 PM | Print | E-mail 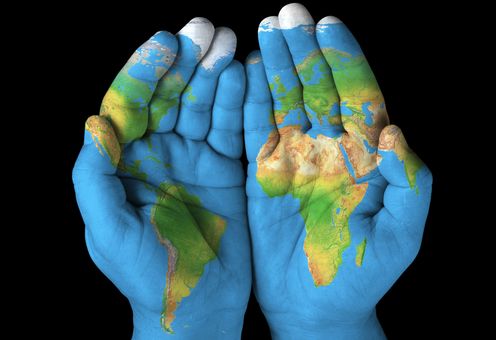 How many continents can you count on one hand? Image: Chones

By Nick Rawlinson, University of Aberdeen

From the 1950s until recently, we thought we had a clear idea of how continents form.

Most people will have heard of plate tectonics: moving pieces on the surface of the planet that collide, pull away or slide past one another over millions of years to shape our world. In these circumstances, the plate on top is subjected to compressing and stretching forces that can create mountain belts such as the Andes in South America. The sinking ocean plate meanwhile melts and can produce volcanoes at the surface. All of this adds new material to the continent. As the plate beneath pushes its way under the one above, large earthquakes can also be generated, like the one that struck Sumatra in 2004 and caused the Boxing Day tsunami. Rip it up and start again

For 60 years the orthodoxy has been that these processes gradually form supercontinents, such as Gondwana or Laurasia, where a vast land mass is brought together before slowly breaking up and drifting away in pieces again.

This has happened a number of times in cycles since the Earth was formed, collecting and then separating land over and over again. Is it a bird, is it a plane…? Designua

Now we have new information that suggests that the process is more complex than we had thought. When supercontinents break apart, small pieces of so-called “exotic continental crust” sometimes splinter off and get set adrift in newly formed oceanic crust (which is generated in places where continents break up).

When the oceanic crust containing the remnant fragment of continental material collides with another continent, the exotic piece of crust is too thick and buoyant to take part in the usual process of subduction. Instead of sliding beneath, it gets stuck at the margin of the continent.

When the surrounding zones of tectonic collision recede as the large piece of continental crust increases in size, the newly formed crust is forced to wrap itself around the exotic continental fragment. This creates a dramatic bent mountain belt called an orocline.

This theory was first published by a group of Australian academics earlier this year, based on predictions from their 3D computer model. But the field evidence to support their findings was limited, so the race was on to demonstrate that this really does happen.

To confuse things further, not all oroclines are necessarily formed in this way: sometimes mountain ranges can bend for other reasons.

So the likes of the Texas Orocline in eastern Australia or the Cantabrian Orocline in Iberia would be good places to look for evidence of the new theory.

But their existence doesn’t tell us anything by itself.

Mountains below the ground

This is where my team came in. I have spent the best part of 12 years driving around the outback in eastern Australia, digging holes to bury small seismic sensors. These record earthquakes from places like Indonesia, Fiji and Japan, which through a process called seismic tomography has enabled us over time to build up a 3D image of the Earth’s crust in Australia.

It is similar to the X-ray-based computerised tomography (CT-scan) that doctors use to construct internal images of parts of the human body. Over the years I planted about 700 of these sensors. The sensors have now enabled us to prove that the theory is correct. Ironically we found what we were looking for, not in any of the world’s known bent mountain ranges but in one of the flattest places on Earth: the Hay plains in western New South Wales, a dry dusty expanse over hundreds of miles.

Hay is the site of an old sea that formed and receded due to variations in sea level, during which sediments were deposited on the eroded bedrock below. Our imaging shows that buried underneath it are the remains of exactly the sort of orocline the theory predicted.

Now for the rethink…

What does this mean for geology? It shows us that continents form in more complex ways than we thought. Scientists will now probably start testing other parts of the Earth’s crust to try and find examples elsewhere, including the oroclines that we can already see. It is very hard to say how widespread these features will turn out to be. Most likely the old version of plate tectonics will still be true in the majority of cases.

The discovery may give us new insights into how minerals are formed. I wouldn’t go as far as to say it will help us to find more minerals, but it should add extra sophistication to our predictive framework for saying where and how minerals form.

It will also make us think more about what happens when supercontinents break apart, especially smaller pieces the size of Tasmania or the UK. It could mean that a lot of them end up forming new continents through this sort of process. Previously scientists hadn’t given this much thought. Wherever the new findings take us, it may be the beginning of a new chapter in how the world fits together.

Nick Rawlinson  is Chair in Geophysics at University of Aberdeen. His work has received grants from the Australian government and Australian Research Council