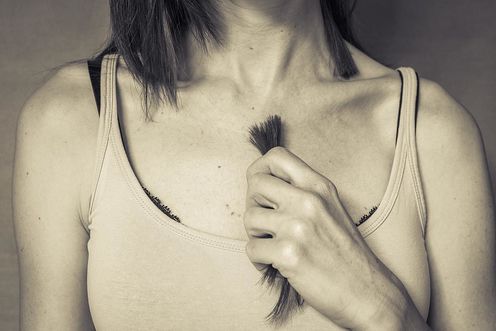 Bits of the self have historically been un memoire emotional aides. Cristiana Gasparotto

As Valentine’s Day approaches, many of us will think about sharing a token of our affection.

The ubiquitous card is often teamed with a staple of the season: chocolate, perfume or flowers. These gifts have become accepted expressions of romantic love in Western cultures and yet they often fail to embody a real emotional connection between the giver and recipient.

Gift giving has been a subject that has interested scholars for centuries. The influential French anthropologist Marcel Mauss (1872-1950) observed in his classic 1925 essay The Gift how giving a gift is giving part of the self. He suggested that even when the gift has been abandoned by the giver, it still possesses something of them and therefore, to make a gift is to make a present of some part of oneself.

In the medieval period, we see this idea in its most literal form. Fourteenth-century romances and ballads from across Europe give examples of how locks of hair were exchanged by lovers before a departure. This piece of the self became an emotional aide memoire that kept the lovers connected during times of absence.

Combs were also given as love tokens. Surviving medieval examples are decorated with scenes of courtly love, Cupid with arrows, and pierced hearts. The comb was a personal item that could arouse desire as it caressed the hair. In Chrétien de Troyes’ The Knight of the Cart, written in the 12th century, Lancelot finds a comb that preserves some of the fair hair of Queen Guinevere.

Lancelot presses the hair to his mouth and face, which induces feelings of joy, delight and, perhaps, arousal.

The gifting of hair continued to be popular throughout the Elizabethan and Jacobean eras where it became a symbol of both love and bereavement. Lockets, bracelets and rings were popular ways of displaying the cherished hair of a lover.

By the 19th century, hair was gifted in increasingly elaborate ways. The Victoria and Albert Museum possesses a watch chain made of plaited brown hair with gold filigree mounts that was given by a girl to her fiancé before their wedding.

Another betrothal token in the museum’s collection, an elaborate leather pocket book made c.1836 in England, has the initials CF (presumably those of the recipient) embroidered in dark brown hair. The custom of sewing hair into betrothal gifts appears to have been popular across England and Scotland until the last century.

Of course, not all love tokens were such literal gifts of the self.

Jewelry was, and still is, one of the most popular tokens of affection. However, it is often the inscriptions on love tokens that express the emotional connection between the giver and the recipient.

For example, a 14th-century gold amatory brooch bejewelled with a freshwater pearl in the collection of the Metropolitan Museum of Art in New York is inscribed with a simple wish:

Fair lady, may I always remain close to your heart.

A delicate gold posy ring was discovered last year in a field in County Antrim, Northern Ireland. The ring, which has been dated to the late 17th century, bears the Old English inscription: “I noght on gift bot gifer” – or, “look not on the gift, but the giver”. Although this ring clearly had value in its material substance, the inscription suggests the gift was an intermediary in the relationship and that the wearer would think of their beloved when they looked at it.

Tokens of our love need not be inert. They have the ability to hold an emotional resonance that reverberates over time and can transport us to a particular place or time by evoking memories and inducing emotions.

In order to put back some meaning in to Valentine’s Day and the tokens of love with which it is associated, we might do well to remember Mauss’ observation that to give a gift is to give part of oneself.

We might not choose to take this is as literally as some of the gifts exemplified here but it is worth remembering that love tokens can be invested with agency: they have the potential to express and stimulate emotions.

By Kimberley-Joy Knight, Postdoctoral Research Fellow at University of Sydney. Knight works for the Australian Research Council Centre of Excellence for the History of Emotions (Europe 1100-1800). This article was originally published on The Conversation. Read the original article.