Twitching In Your Sleep Is More About Mapping The Brain Than Chasing Rabbits
By The Conversation | October 3rd 2014 04:00 PM | Print | E-mail 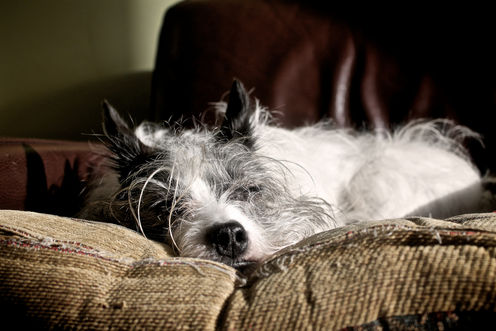 Coming to get you. Credit: D Simmonds, CC BY-SA

Twitching – the thousands of jerky movements that baby mammals, including humans, dogs, cats, and rats, make each day – is one such behavior. Twitching happens in the arms and legs, fingers and toes, whiskers and tail, and even the eyes (the rapid eye movements that give REM sleep its name). For millennia, humans have thought of twitches as by-products of dreams, an idea encapsulated by the notion that your dog is simply “chasing rabbits” in his sleep. Adults twitch too, of course, but they do so at a much lower rate than do babies.

But what if twitching has a function that goes beyond dreams. In research carried out on infant rats – at ages when they sleep and twitch a lot – we found that the brain processes sensory feedback from twitches and wake movements very differently.

Learning about our limbs

Our work, published in Current Biology, gives new support for the idea that twitching contributes to the process through which we learn about our limbs and how to control them. They may even help us understand if and how twitching affects our sensory and motor systems across the lifespan as our bodies grow, as we gain and lose weight, and as we recover from disease or injury.

Over the last decade, scientists have made great strides in understanding how the brain responds to sensory information flowing back from twitching limbs. Whereas it was once assumed that the brain blocks this sensory feedback, it is now known that the hundreds of thousands of twitches produced each day by a sleeping rat pup trigger similar quantities of brain activity.

Our hypothesis is that twitches are the brain’s way of exploring its body, much like the way sonar is used by submariners: one ping here, one ping there, with the feedback from those pings used to map the outside world. So, too, may twitches help the infant brain to map the body.

All well and good, but we kept confronting a very strange phenomenon that we were unable to explain: whereas twitches reliably triggered a lot of brain activity, similar (or even larger) limb movements while awake didn’t. This seemed paradoxical because we generally associate waking with more brain activity than sleep, not less.

To explain how we resolved this paradox, it is important to understand that all animals, including humans, constantly monitor self-produced movements while awake. In addition to the motor commands that produce limb movements, our brain sends secondary signals that are copies of these motor commands to other parts of the brain so that it can keep track of the information flowing back from the moving limbs.

Simply put, when we produce a limb movement, as when we wave our hand in the air, we expect the sensations that return from the moving limb. In contrast, when someone else moves our hand for us, we don’t expect the resulting sensations. These two kinds of movement – the first self-produced and the second other-produced – feel very different and lie at the heart of what it means to be an autonomous individual.

To really test this idea, we had to devise ways to manipulate the expectations of the rat pups as they moved their limbs. The results were clear: when we tricked the pups into moving their limbs in violation of their expectations, the movements triggered a lot of brain activity – just as we saw with twitches. And when the movements were produced in a way that did not violate the pups’ expectations, very little brain activity resulted – just as we saw with wake movements.

These results help us make sense of how twitches contribute to development. That is, by treating twitches differently from wake movements, the sensations from twitching limbs are not filtered out. Instead, twitches lead directly to brain activity, which is necessary for brain plasticity, that is the brain’s ability to change.

If our findings had turned out differently, it would have been very difficult to believe that twitches played any functional role for the developing brain.