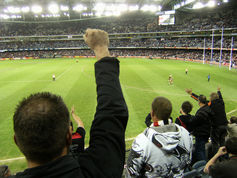 It’s Grand Final season – it might seem that nothing else matters about now.

Collectively, is there anything that rivals our passions for sport? Movies, art, culture, music or science? Not even close. Run a decent sporting competition and crowds will flock. Call it tribalism, a sense of belonging, modern day religion, sanctioned disinhibition, competitive instincts or simply escapism – who cares? – it works.

In our culture, if you’re not part of it, you can feel like an outsider.Daily arguments abound regarding who will win, why, the ins and outs, the broader implications and who is the greatest player. Sports passion seems to be in our blood.

My first real football memory is my father returning from a Grand Final in 1970. Our team lost after being miles ahead at half time. It was an infamous loss (or famous victory – depending on who you supported). My father parked the car in the carport and just sat there. He didn’t come up to our flat. I was worried. My mother told me to leave him be. He’ll get over it.

I think he finally came inside after midnight. He didn’t speak for about a week. I think he missed a few days work. I think I remember a moment where he lay on the floor crying. He denies it now. Who says men can’t display emotions? Winning fans are more optimistic, they rate their sex appeal higher and some studies even suggest they are more financially optimistic. You are more likely to favorably rate your own life if your team is doing well.

Losing fans are the opposite of course, and sometimes this can spill into anti-social behaviors. Some crime rates are higher in the after-math of losses. Domestic violence reports have been found to spike 10% in the hour after an unexpected loss. Other studies suggest violence increases after games regardless of the result. Alcohol is often cited as a factor.

Other fan behaviors are less ominous. One of my personal favorites is superstition. I’m pretty bad myself despite considering myself immune to such nonsense when away from sport.

At games I wear my lucky football jumper&wont wear any colors of the opposition to a game at all! I have a lucky medallion. I never look at the score while play is going. I touch wood for luck. I won’t sit near opposition supporters (actually, that’s not superstition, they just annoy me).

The famous psychologist, B. F. Skinner, coined the term superstitious conditioning way back in 1947. He studied hungry pigeons in boxes where food came randomly – and the pigeons developed various behaviors, like spinning around.

Skinner suggested that whatever behavior they were doing when the food arrived, in their little pigeon heads, became associated with the good fortune of receiving food – even though there was no link. He said this sort of random conditioning accounted for our superstitious behaviors. So it would seem that at some point over the years, in my little human head, I’ve associated winning with various behaviors – my superstitions! My favorite football jumper is just the pigeon equivalent of spinning around in the mistaken belief it will bring me my reward. And I know I’m not alone.

Sports fans the world over report various bizarre superstitions. The players aren’t immune either – Raffael Nadal is the most famous example – he lines up his drink bottles, he crosses the lines right foot first, he touches his nose, adjusts his pants and more. A fair few of our footy players sport beards because they don’t shave when they are playing well!

I sometimes wonder whether the whole sports obsession is worthwhile. I have a cousin who gave up supporting any particular team. He says he enjoys the game far more now. No tension, no superstitions, no anger.

Finally, if you get to the end of the game intact, you will likely suffer confirmation bias – the tendency to search for explanations that confirm your already strongly held beliefs.

If your team wins you are likely to internalize – credit the team, the coach, the club, but if you lose you’re more likely to externalize – blame the umpire, the conditions, or something else beyond your team’s control.

As I hinted at the start, football and love are perhaps two things that are best left unexamined. I guess at the end of the day, the best advice for the fan leading into the finals is to sit back and enjoy the ride.

Just like love, it might go your way and it might not, and you’ll be left pondering the whys and wherefores. Keep your lucky charms close by, and remember - there’s always next year!!

Steve Ellen, Adjunct Associate Professor of Psychiatry at Monash University, does not work for, consult to, own shares in or receive funding from any company or organization that would benefit from this article, and has no relevant affiliations.