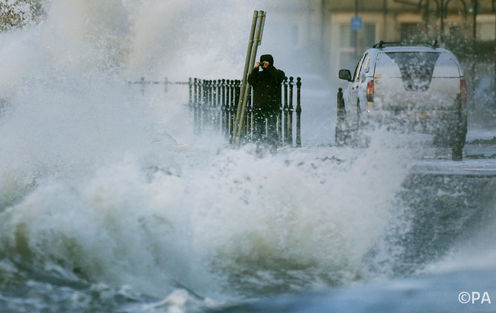 Braving the eye of the bomb. Danny Lawson/PA

By Edward Hanna, University of Sheffield

A dramatically-named “weather bomb” exploded across the UK in the past week, bringing winds gusting up to 144 mph on outlying islands.

But despite the cool name these “bombs” are more common than you might think.

The UK’s forecasting agency the Met Office defines a weather bomb as an intense low-pressure system with an atmospheric pressure in its core that drops at least 24 millibars in 24 hours.

Their charts indeed show an impressive low-pressure system tracking slowly eastwards between southern Greenland and Iceland during 8 and 9 December. The bomb as of 9 December. Met Office

The more precise meteorological term is “explosive cyclogenesis”. It occurs when a low-pressure system is subject to sudden, explosive intensification, typically after an injection of cold, dry air from the stratosphere. This doesn’t normally happen: the stratosphere lies above an altitude of 10 to 15 kilometers and the air up there tends to stay there.

This air from above bumps into the warmer, wetter air below which has the effect of reinvigorating and spinning up the low-pressure system. As air in the centre of the system rises ever more rapidly, the ground-level air pressure drops sharply. More air rushes in to fill the space, meaning very strong winds.

Bombs are likely to be triggered by changes in narrow, fast-flowing currents of air high above the Earth’s surface known as jet streams. The North Atlantic polar front jet stream is a key player in an ever-present but varying meteorological battleground where warm, moist tropical air masses meet cold polar air from further north.

This week the jet stream has been very vigorous with core speeds of up to 200 mph, about twice as fast as normal. A bit of perspective

These “weather bombs” are not unusual features of the UK’s autumns and winters. The British Isles do after all lie in the path of strong prevailing westerly winds and are often near the confluence of tropical and polar air masses.

Take last winter, for example. In the UK this was one of the stormiest seasons on records going back for well over a century, after a series of more than half a dozen major storm systems ran across the country in quick succession. Indeed during one of these storms Stornoway on the Isle of Lewis in Scotland’s Outer Hebrides saw one of the lowest sea-level air pressures on record.

Then there was the October 1987 storm that caused 18 deaths, £300m worth of damage (at 1987 prices), felled 15 million trees and was responsible for the first major blackout in London since the Blitz. That storm was caused by another weather bomb, in the Bay of Biscay off the west coast of France.

The barometric pressure change of 25.5 millibars in three hours – indicative of exceptionally strong winds – recorded at a navy base on the south coast of England was easily the greatest on record for the British Isles. But 1987 wasn’t the UK’s worst storm ever. The November 1703 storm, famous today for the author Daniel Defoe’s pioneering journalistic account, left an unprecedented trail of destruction in its wake. It arrived with minimal warning and killed somewhere in the region of 10,000 people.

So the recent low-pressure system – the bomb – has certainly led to some spectacularly high waves and wind speeds but it is not an untypical intense winter low pressure system; given its position in the extreme northern Atlantic around a favored spot where cyclones form, it does not seem very unusual from a climatological perspective.

Famously, the Met Office largely failed to forecast the 1987 storm but these days it is much better at making short-term weather predictions of up to a week ahead. Provided we listen to the Met’s severe weather warning system I don’t think we should be unduly scared by “weather bombs”. In a maritime climate they are just a normal part of the autumn and winter weather experience.

Of course climate change could mean more such bombs in future – after all, it seems to be making many weather extremes more common. However, these storms are formed and controlled by the polar jet stream and models of the climate over the next century aren’t too clear on what will happen to the jet stream. Even reconstructions of past storms based on wind speed and pressure records show lots of fluctuations but no clear, consistent trend.

Unlike steadily rising global temperatures, we can’t say for sure that these storms will increase. The IPPC cites “substantial uncertainty and thus low confidence” in projecting changes in North Atlantic storms. We simply don’t yet know whether global warming will necessarily mean more storms and “weather bombs” over the British Isles.

Edward Hanna , Professor of Climate Change at University of Sheffield, does not work for, consult to, own shares in or receive funding from any company or organization that would benefit from this article, and has no relevant affiliations.