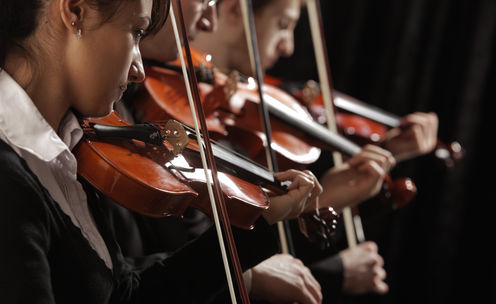 By Clive Brown, University of Leeds

After a very drawn out and fraught construction, the Philharmonie de Paris is finally open. The 2,400 seat concert hall was conceived with ambitious plans to democratize classical music, and is situated, in line with these aims, on the boundary between the city’s affluent center and its banlieues. Whether it will succeed in these ambitions remains to be seen.

Classical music has always been the music of the educated classes, but today, despite the much more equal distribution of education in first world society, it is seen by many as stuffy, irrelevant and unappealing.

The term “classical music” – coined in the 19th century to describe material that had been judged worthy of inclusion in the pantheon of great art – is now used somewhat misleadingly to apply to everything that might be performed in a concert hall or opera house, rather than in more informal venues. The old assumption that “classical” music has more cultural value than “popular” music is no longer orthodox – it has become one genre amongst many.

Current performance conditions do little to help this – tickets to opera theaters and concert halls, where the audience listens in unbroken silence, are generally expensive, and performers adhere conscientiously, yet often un-inspiringly, to the notation in the score. But it wasn’t always like this. Performers of the past approached their task much more like popular musicians today, and this shift in style has almost certainly contributed to classical music’s lacking appeal to much of the population.

A major factor in the diminished popularity of classical music is the failure of modern performers fully to understand what the musical notation of the past was expected to convey to them. Pre-20th century musicians approached performance much more like popular musicians still do. For them, it was more fluid, more personal – composers expected them to understand the hidden messages behind the notes. Even in the great music of the late 19th century such as that of Brahms, options in performance were hinted at rather than prescribed.

The notation was merely a starting point – a great performer was expected to go beyond it.

But classical performance has lost much of the improvisatory element that was an essential part of its original character. This has resulted in a stiffly formal distortion of what the greatest composers and performers of the past expected.

The old musicians understood that there were many aspects of an effective and engaging performance that could not be embodied in the score. Tempo was often expected to be more flexible. Rhythms could be bent in a manner we still hear in jazz and other types of popular music. Notes weren’t always be taken cleanly, but often approached with various kinds of slides and tonal inflections.

Vibrato was an ornamental effect rather than a continuous and regular oscillation of the sound. Parts that are notated vertically together in the score, were frequently expected not to be together in performance. In keyboard playing, chords that appear to be vertically together were mostly performed with various degrees of spreading.

These are just a few of the ways that musicians built on the raw notation in order to turn a merely correct performance into a fine one, making concerts much more exciting and vibrant events. But these practices were gradually eliminated in the early 20th century.

Classical musicians increasingly equated fidelity to the composer’s “intentions” with reproducing – to paraphrase a well-know judicial phrase – “the text, the whole text, and nothing but the text”. This transformation partly reflected the ideals of modernism, in which the rejection of the past was a first principle, but it may also have been motivated by a desire to distance “culturally superior” classical music from the popular styles in which these freedoms were retained.

Already in the 1930s, voices were raised against this growing prioritization of the literal meaning of the notation. In 1933 a reviewer in The Musical Times criticized rhythmic rigidity in a performance of Brahms’s Violin Sonata op. 78, complaining that it ran contrary to the composer’s tradition. And, with regard to another performance, the same writer, after remarking that it “pleased by its modest competence”, continued:

Neat as to technique, the players had so eliminated all superfluity from their performance that their Mozart sonata struck one as less interesting than they or it deserved to be.

But such mild admonitions failed to prevent classical performers from renouncing their old freedoms, in the misguided belief that the music on the page contained virtually everything the composer expected. So it is hardly surprising that many genuinely musical people are now deterred from engaging with classical music by a perception that it is formal, rigid, and lacking in emotional vitality.

As yet, few professional musicians have begun seriously to experiment with responding to the messages that lie behind the notes on the page as their predecessors did. But this core repertoire of great music must now be recreated in ways that return it to its quasi-improvisatory roots. It needs more than family friendly, state-of-the-art concert halls with innovative programming – though this is a good start.

If classical music is to regain its cultural significance, musicians must engage with it more courageously, learning once more to read between the lines of the score. Only then will they recapture the full measure of freshness, beauty and excitement that composers expected their notation to convey to skillful performers and, through them, to the listener.

Clive Brown, Professor of Applied Musicology at University of Leeds, had an AHRC grant from 2008-2012 for a project on 19th-century performing editions.