Why Americans Are Obsessed With Pumpkin Spice Everything
By The Conversation | September 12th 2015 09:00 AM | Print | E-mail 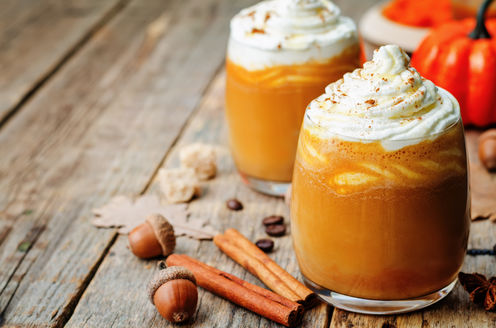 It was a humid, sticky 32°C when I made a quick trip to the grocery store in shorts and a tank top earlier this week. Despite the heat, however, the store clearly wanted me to think it was the fall season – and for us Americans, that means pumpkin spice.

At the risk of sounding any more like Forrest Gump’s shrimp-obsessed friend Bubba, let’s just say that we’ve all gone a little mad. And with the official release of everyone’s favourite – the Starbucks Pumpkin Spice Latte – it’s time we ask: why are we so obsessed with pumpkin spice everything? Even if some products taste, as comedian John Oliver says, like a candle might taste. (I won’t mention any names.)

Get it while it lasts

The anticipation for pumpkin spice’s annual return – soon replaced with gingerbread and mint-chocolatey goodness by wintertime – can be explained by a psychological theory called “reactance.” In short, reactance theory can explain why we respond so strongly to limited edition or timed offers.

During the first investigation of this theory in 1966, psychologist Jack Brehm studied the effects of product unavailability on its attractiveness to consumers. Participants were asked to listen to and rate four music records. Afterward, they were told that they were allowed to keep one. One group of participants was also informed, however, that the record they rated as their third choice was unfortunately unavailable because it went missing during shipment. When asked to re-evaluate their ratings, 67% of participants ranked the missing record higher than they had previously.

Marketers have recognized and implemented reactance theory for years. We’ve all seen commercials for “limited time only!” products or felt more motivated to go shopping for new clothes when a snazzy “30% off, only good through Sunday” coupon shows up in the newspaper. We might prefer to eat regular Oreos, but knowing that pumpkin spice Oreos are only around for a few weeks makes the latter choice more appealing to us.

Everyone else is doing it

When it comes to the pumpkin spice craze, there’s certainly a bit of social influence at play. Sure, pumpkin spice is good, but so are chocolate, vanilla, strawberry, apple cinnamon and caramel. But when your Instagram feed is filled with friends wielding their first pumpkin spice lattes of the season, or when everyone in your 2pm coffee break group decides to go for one, you’re probably more likely to get one, too.

Social conformity is when we match our attitudes and behaviours to unspoken “norms” of small groups or society as a whole. The phenomenon often stems from a desire to feel secure within a group. Imagine approaching a mall food court with five restaurants. Although all five are open and willing to serve, everyone is lined up and eating at just one restaurant. Based on your perception, which place are you most likely to pick for the best food?

Of course, you aren’t going to be ostracised by society if you choose peanut M&Ms over pumpkin spice at the grocery store. But when it comes to any craze – slap bracelets, Beanie Babies, the Macarena, and pumpkin spice – it makes us happy and secure to feel included with the rest of society.

Dead leaves falling to the ground, early sunsets, and the grey chill of the impending winter months don’t exactly inspire positive feelings toward autumn. But when we attach meaning to fall – the start of school, new leather boots, big cosy scarves, and holidays like Halloween and Thanksgiving – it’s significantly more enjoyable.

Injecting value into something – in this case, a season – stimulates feelings of nostalgia, which have been shown to improve our mood, make us feel more socially connected, comfort us and make us more willing to view ourselves in a positive light.

Like hot cocoa, fuzzy sweaters and apple picking, the pumpkin spice flavour has become synonymous with autumn. Our desire to return to the crisp fall air during a blizzard or heat wave is also accompanied, for many of us, by our nostalgic feelings toward pumpkin spice everything.

The sugar makes our brains happy

It helps, of course, that most pumpkin spice products are superbly sweet. As I’ve previously written, our brains are strongly wired to respond to the taste of sugar and other carbohydrates.

Now, if you’ll excuse me, I’m going to go reward myself for writing this article with a pumpkin spice latte. And, yes, I’ll admit that I was first in line when they launched – despite the thermometer reading 35°C at the time of my purchase.