Tommaso Dorigo
A new analysis by the ATLAS collaboration, based of the data collected in 13 TeV proton-proton collisions delivered by the LHC in 2016, finds an excess of X-->4 lepton events at a mass of 240 GeV, with a local significance of 3.6 standard deviations. The search, which targeted objects of similar phenomenology to the 125 GeV Higgs boson discovered in 2012, is published in ATLAS CONF-2017-058. Besides the 240 GeV excess, another one at 700 GeV is found, with the same statistical significance.
3.6 standard deviations correspond to a "one-in-six-thousand" chance to observe data at least as discrepant with the background model as what is observed, if they do come from background only. So it is something interesting, as one may entertain the hypothesis that the data do contain some extra signal in it, causing the observation.

However, in general such fluctuations are common in collider data. Physicists have learnt to "derate" the computed significances of bumps appearing in new particle searches - equivalently, to increase the estimate of the probability (p-value) of seeing the data if coming from background-only fluctuations - by considering the number of independent places where a bump was sought for in the first place. The p-value-enhancing factor is commonly called "trials factor" and the effect addressed to as "Look-Elsewhere Effect" (LEE for conniosseurs). 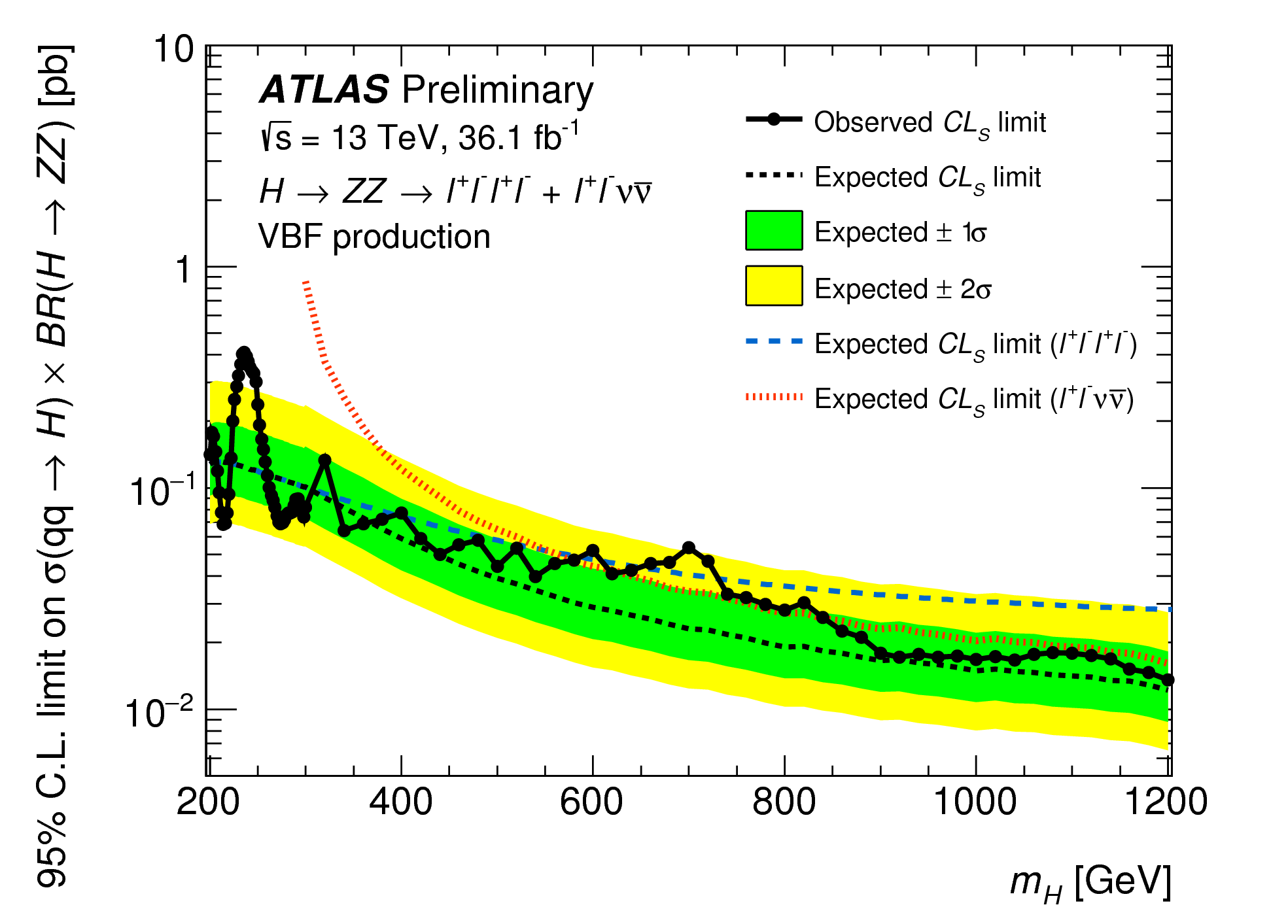 Above: as a function of the reconstructed mass of the hypothetical particle decaying into four leptons, ATLAS plots the upper limit on the particle's production rate. The green+yellow band shows the range of values that the expected limit should take in the absence of any new particle, with green meaning "the central 68% quantiles" and yellow meaning "the central 95% quantiles". Whatever is above the curve is a significant-ish excess. The  black points show the observed limit, which has a upward spike at 240 GeV due to the presence of an excess of events with that mass.

The two bumplets found by ATLAS have a "trial-factor-corrected" significance of just over 2 standard deviations (a few-in-hundred chance), so they appear insignificant. However, in case you have a model which predicts in advance the mass at which the particle signal should be found, the local significance (3.6 sigma in this case) should be the one to look at. And 3.6 sigma is a quite serious business: the number is called "strong evidence" by ATLAS itself when it refers to H->bb decays neatly evidenced in the same dataset through a careful new analysis (one which I have not had an occasion to talk about here, unfortunately).

Incidentally, 3.6 sigma are also about the significance of the 750 GeV X->gamma gamma bump found by ATLAS 2 years ago - you know, the one that caused 600 theoretical papers to flood the Cornell Arxiv in the matter of a few months. So you see: 3.6 sigmas can both be the first hint of a real signal - the 125 GeV H->bb one nobody doubts about - or a fluctuation that should not be taken too seriously and which is destined to die away, as the 750 GeV fairy.

Today, the 240 GeV ATLAS signal looks intriguing, for a couple of reasons. One is that an independent researcher, who has a past involvement in experimental physics research but is now doing totally different things, has predicted such a particle in a toy model he put together several years ago. The guy is Tony Smith (Frank D. Smith his registered name), a long-time follower of this blog. His toy model is described in a vixra paper he wrote in February last year.

The other is that Tony himself points out that CMS also seems to have been seeing slight excesses more or less where he predicted them, in their 4-lepton mass distribution. Being a CMS member, I will not comment on that statement, as CMS has not issued any on the matter.

Whether the 240 GeV Higgs will join the 750 GeV one in the trash bin or whether instead it will grow to become an astounding new find, confirming Tony's model, is a topic on which I accept bets. Not from Tony himself though, as I won two with him already and I don't want to look like I exploit his perseverance in pursuit of exotic new physics signals - he is sort of a friend now. But if you believe this will become the next big LHC discovery, and are willing to bet $500 on it, drop me a line!