Tommaso Dorigo
My CMS colleague Didar Dobur, who chairs the "Top Properties" working group in the experiment, presented today the first observation of the process whereby a top quark is produced in association to a Z boson. I could follow the presentation by videoconference, so I am blogging about this result in close to real time, for a change.
These "tZq" events are peculiar for several reasons: first of all, they involve two of the heaviest elementary particles we know. The top quark is the heaviest, with a mass of 173 GeV - or about 185 proton masses; and the Z boson weighs 91 GeV, or about 97 proton masses. The Z boson is also peculiar by being the shortest-lived elementary particle we know: it decays in less than a tenth of a millionth of a billionth of a billionth of a second, a time so short it is truly impossible to picture it.

The production of a single top quark is peculiar in itself, as it takes place by the action of the weak interaction - only weak interactions can create odd numbers of these particles. This also accounts for the rarity of the process. But attach another weak boson to the process, and you get an even "weaker" process. The main Feynman diagram for the process is shown below. In the diagram, time flows from left to right, and quarks are depicted as full lines with arrows. 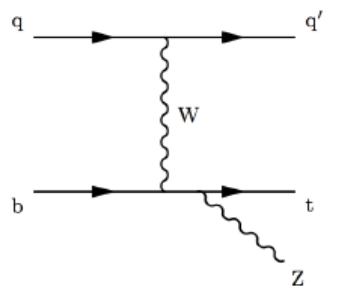 In principle, we do not expect to see something different from what the standard model predicts in this rare reaction; and yet, it is precisely its rarity that makes it interesting, as if there exist new physics reactions we have not discovered yet, they are more likely to show up when we study processes that are rare to begin with. The reason is clear: if we have not found new physics yet, its effect must be small, so we have no chance to detect it in physical processes that occur at a large rate. So here we come, rare decays!

The data used for this search correspond to an integrated luminosity of 77 inverse femtobarns of proton-proton collisions, produced at 13 TeV by the LHC in the years 2016-2017. Integrated luminosity is a measure of how many collisions were produced: a collider's luminosity can be computed by taking the total number of particles in each beam, multiplied by the times they cross every second, and dividing this by the area where the beams are brought to intersect. Of course, to get the "integrated luminosity" of a data taking period you then need to sum the instantaneous luminosity at each instant during the run.


Backgrounds that affect the data selection come from a number of different standard model processes. The largest are due to top quark pair production where a third lepton comes from a b-quark decay. That is because the "tZq" signature is sought by selecting events with three charged leptons (electrons or muons are used in this search), two from the Z decay and one from the semileptonic decay of the top quark. The top pair background in such a selection arises because a top quark pair can produce two leptons in its decay, and it also produces two b quarks, each of which may occasionally yield another lepton.

Another background comes from the associated production of _two_ top quarks and a Z. The top-antitop pair production can also, in fact, be accompanied by the emission of a Z boson; such a process is less interesting to study, but it needs to be reckoned with in order to extract the tZq process.

After a selection aimed at isolating events with a leptonic Z decay and the signature of a semileptonic top quark decay, a set of boosted decision trees are trained to distinguish the signal from all competing backgrounds. The BDT output distribution of the signal region, divided in three categories depending on the properties of the observed jets in the selected events, is shown in the graph below.

The "red" histogram shows the signal contribution to the data, as returned by the fit. It of course concentrates at high values of the BDT discriminant, and it is mostly prominent in the subset of events with two or three jets (left), while in the events with a larger number of jets the ttZ background (dark blue) is a serious competitor.

A combined fit to the three signal regions, plus two more orthogonal datasets enriched of background processes used as a control sample, produces the estimate of the signal strength. As shown below, this comes out in good agreement with standard model predictions - no new physics here! The signal has a statistical significance well exceeding the "five-sigma" level above which a discovery claim can be put forth. So, congratulations to CMS for this small but interesting addition to our knowledge base of elementary particles!