Tommaso Dorigo
Like it or not, human-enhanced global warming is an established scientific fact. Indeed, as much as we hate the idea that we are affecting the future living conditions of hundreds of millions of human beings (not to mention animal species) with our carbon dioxide emissions, most of us - reasonable people with no agenda or direct interests in polluting industries - agree on the fact, and most of us also agree that we are doing far too little to alleviate the dramatic ongoing phenomenon. The science is out, and while it is a healthy thing to question the data and the results in all cases, it is a far healthier thing to accept evidence when it is overwhelming.
[The graph below, e.g., taken from a recent NASA analysis, shows the global temperature trend of July in the past few decades. Of course, a graph proves nothing. But if you turn your head away you will never see where reality is; it will still hit you with a hammer one day, though.] 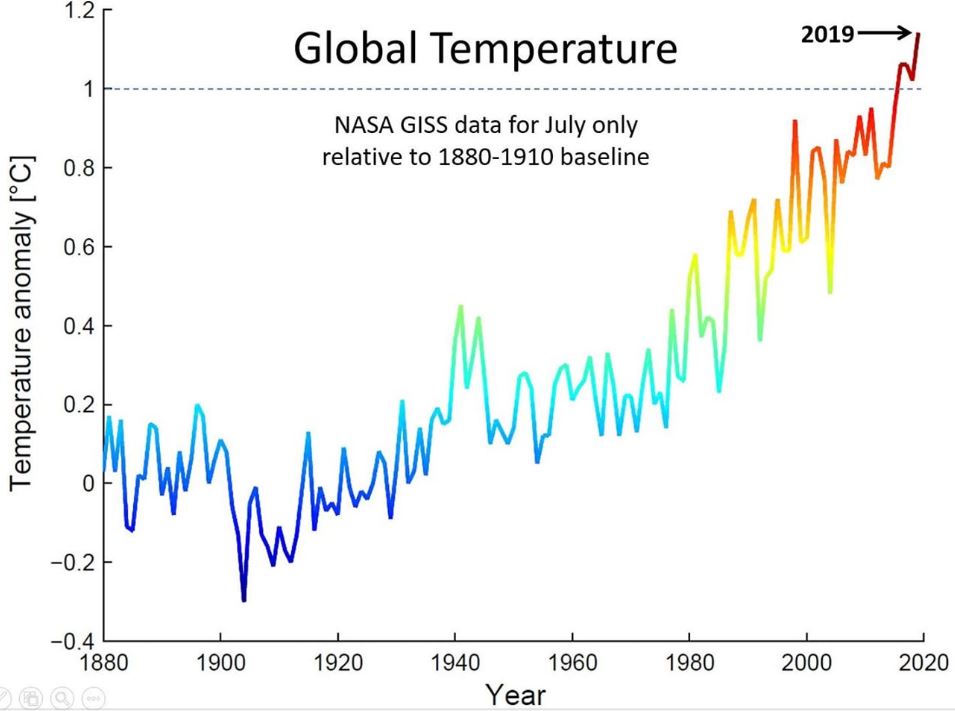 But then there are, indeed, people who have agendas. And they are trying to confuse the matter in all ways they can. These individuals are looking forward to the profits they can make or continue making from unrestricted pollution, or worse, they plan to speculate on the catastrophe we are bringing upon ourselves.

And finally, there are the ignorants, who will listen to the source which is more akin to their political party, without trying to understand where is the truth. There are passive and active ignorants, of course. I hate to say this, but ignorants in general, and the latter category in particular, are the people I would be the happiest to kick in the arse. In a profit versus damage diagram like the one below, they are by far the most despicable life form. Indeed, ignorance is a worse cancer than greed and wrongdoing, as it leads to chaos. It is by speculating on ignorance that climate deniers are keeping the rest of us from managing to put together a coherent action, e.g. in terms of forcing our governments to reduce carbon emissions. 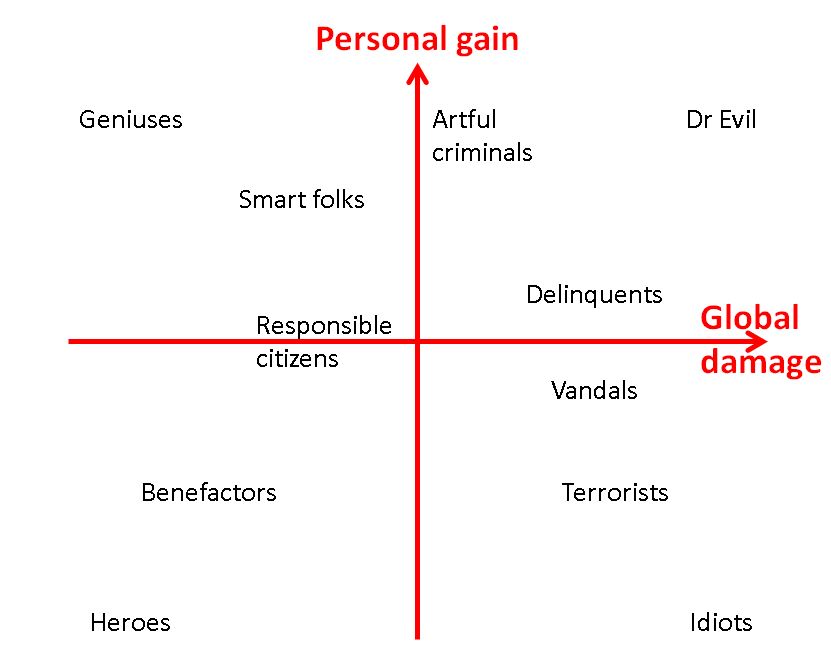 Alas, this situation is in stark contrast with the rather virtuous outcome of the realization we made in the seventies that we were jeopardizing the ozone shield in the upper atmosphere by freeing large amounts of CFC pollutants, such as those once present in spray bottles. Back then, we managed to organize a concerted effort to reduce the contamination of that chemical in the air, and the outcome has been apparently successful. We learned that we will always have to keep watching after ozone, as it is a scarce resource, and a crucial one for most land-based organisms on Earth, as it strongly reduces the otherwise horrible effect of ultraviolet radiation from the Sun.

A difference I see between the risk of ozone consumption and carbon dioxide increase is that while we would all slowly cook under UV light if we jeopardized our ozone shield, not everybody will be dramatically affected by raising temperatures. That is why, I believe, the response to an impending global warming has not been coherent and constructive.

Those who live in the poorest areas of the planet, along coast lines, and within the tropical parallels are the ones who will pay the highest price. Floods will take their homes away, and with them swaths of land. Rising temperatures will make the rest of the land arid and unlivable. Migrations will skyrocket, with their associated huge cost in terms of lives lost, suffering, political destabilization, rise of nationalism. Whether you live in the US or in Europe you only have to look around you, as you can already see what is the response of rich countries to this unavoidable phenomenon. Egotism, walls, separation of family members at the borders, the turning of our head away while people drown a mile from our coasts.

In the light of the above, there is little any one like me and you can do. But at least, we can try to resist as we can to the attack that climate deniers are moving to us, to the Earth, and to scientific truth. One way to do this is to not leave unattended any claim that the phenomenon is not happening or is not dangerous. This is obvious, and needs no commentary.

Another way, which might become a useful deterrent, reducing the false claims of politically exposed climate deniers, is to create a public register where their declarations are exposed, countered with facts, and archived. Politicians are accustomed to lies big and small, and they usually get away with it, mostly because their supporters do not care much. But when our atmosphere presents the bill, hitting us hard on our way of living, our wealth, and our well-being, maybe that register could become handy.

Anybody running for office would then have to reckon with the record of their obstruction of actions against something which in the meantime has become a horrible fact. If I were a 70 years old climate denier I would probably ignore something like that, but if I were a 40-years-old Congressperson with ambitions to keep or increase my powers in the years to come, I would not like my words of denial today be written on the wall, for future reference. Or maybe I am overestimating the intelligence and forward planning of these folks... Yet I think it is worth a try. And even if the deterrence failed, the archive would still be an insurance on whatever we'll have left.

So a quick search on the web finds a Facebook page called "Climate Change Denier Register Australia".  It is the kind of thing I am talking about, but it is a bit too regional and small scale, if I understand correctly. Why can't some folks with $$$ in their hands and who are happy to help fighting this anti-science scum finance the organization of a global register, which can become a reference to newspapers around the world? Can the Elon Musks and the Bill Gates spend a ten-thousandth of their wealth on this? It would probably suffice. Or, if this already exists, I would be happy if you could point it out to me. The more such an endeavour is publicized, the better.