The Phoenix Sun Times opens the article with the following paragraph: "A battle of the bulge has broken out between two restaurants that feature sexy 'nurses' as waitresses, heart-attack-themed ambiance and towering burgers that would make a vegan vomit." Mmm, a heart-attack themed ambiance? Sign me up!

Several years ago, a guy opened up a restaurant called the "Heart Attack Grill" in Arizona. The HAG's site is jaw-dropping - they have burgers from single through quadruple bypass, flatliner fries, etc. People over 350 pounds eat for free. And the slogan? Yep, "a taste worth dying for."

Sadly, that's not the worst part of the story. Recently a different guy, who allegedly wanted to open a HAG franchise in Florida but talks broke off, opened a restaurant in FL called "Heart Stoppers Sports Grill." So, the HAG owner sued. 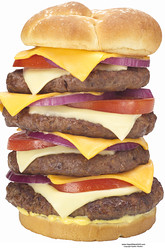 The HAG lawyer told the South Florida Sun-Sentinel that the "Heart Attack Grill is the originator of the medically themed hamburger grill and restaurant," and "It sells high-calorie food products and we have had very extensive media coverage, including numerous shows on the Travel Channel and the Food Network. In my mind, we are just as well known as McDonald's."

The HSSG lawyer countered, saying "It's not the same concept," and "The Arizona restaurant's concept is high-caloric food that is bad for you and will basically kill you . . . My guys have a restaurant that is medically themed . . . My clients' restaurant seems more like an actual medical facility." HSSG is decorated with defibrillators, dialysis machines and other medical equipment, has tables that resemble wheelchairs, according to the Wall Street Journal's Law Blog.