Gareth Fabbro
For Thursday's contribution to Evelyn's photo meme, I present the Isle of Skye.

Skye was perhaps my favourite field trip of my undergrad.  We stayed in cabins out in the middle of nowhere, by the sea, and by that time we had really got to know each other as a group.  We were practising our mapping on the area the cabins were sat, so every morning we literally just had to step out of the front door to be 'in the field'.  Because there weren't a set number of outcrops we had to see each day (we just wandered around, and every now and then a demonstrator would pop up from behind a rock to help us) it was all fairly relaxed.

The day we arrived (after a 12 hour "party" train journey), this was the sight that greeted us.  The sun was setting across the loch, behind the Coulin hills.  Little did we realise at the time that that would be the last we would see of the sun until the final day, when we got to see the Coulins up close.

The Coulins are fossil magma chambers, there are the Black Coulin (a gabbro) and the Red Coulins (a granite),  which is also the names of a couple of rather nice local beers...  The lower parts of the mountains have been sculpted by glaciers during the last ice-age and are smooth, but the tops are still jagged.  These peaks must have protruded above the ice sheet. 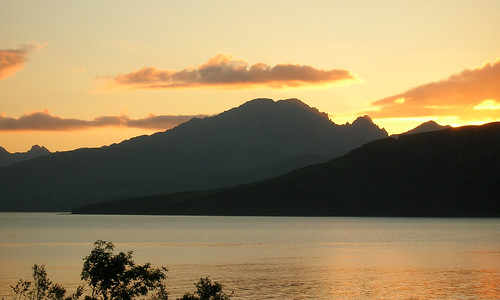