Gareth Fabbro
My friend has written a paper on Pantelleria (which I am a co-author of), and I thought it was a good opportunity to discuss some of the techniques we can use to reconstruct a volcano's magma chamber using the petrology (chemistry and texture of the crystals and glass) of the rocks erupted at the surface.

I've written before about Pantelleria, and now my friend David Neave has published a paper on the research we did there.  I should point out the most of the credit belongs to David as he did most of the work, but I thought I should write a bit about it here.

The bulk of this paper uses the chemistry of volcanic glasses and melt inclusion trapped in crystals to reproduce the evolution of the magma from initial melting in the mantle all the way up to eruption.  Many details of the magma chamber can then be calculated using this evolution path.  While some of these details may seem a little abstract (like the amount of feldspar crystallisation relative to pyroxene crystallisation), when put together it forms an important story about what occurred under the volcano in the past — and what is likely to happen again.  One of the conclusions of this study is that Pantelleria is more dangerous than previously thought (in tabloid-speak), but without the careful modelling we would not know this.  I will come back to the dangers at the end, but first I want to go through the techniques used. 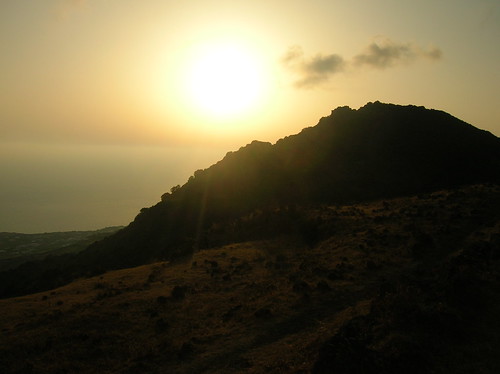 Monte Gibele, one of the domes erupted on the island of Pantelleria.

If you haven't read my previous post about Pantelleria, now is a good time to do so as it gives a nice introduction to the volcano.  Briefly, Pantelleria is a volcanic island about half-way between Sicily and Tunisia, and is located there due to the fact that the Sicily channel is being stretched.  The magma there is a type known as pantellerite (named after the island), a magma particularly rich in sodium and potassium, and poor in aluminium.  It is a rare magma type, found only at a few volcanoes in other rifts, notably in the East African Rift.  Although the composition is only subtly different to that found at other volcanoes, those differences could have important effects when it erupts.  Because of its rarity, pantellerite has not been all that well studied in the past.

One of the first things David looked at was whether the compositional range found could be explained by fractionation.  While consensus grew around fractionation dominating over melting the crust to produce the most evolved, silica rich magmas, there were still questions over which process produced pantellerites.  One of the main arguments against fractionation producing pantellerites was something known as the 'Dalay gap'.  When you look at the composition of the rocks at Pantelleria you see lots of primitive basalts (which would have come fairly directly from the mantle) and lots of evolved rocks but nothing in between.  If the evolved melts were produced by fractionation of the primative melts, then you might expect to find all the intermediate compositions it has to go though to get there, whereas if the basalts were simply melting the crust then you would get two discrete magmas with discrete compositional ranges.  Although the Dalay gap may be better explained by crustal melting, there were other problems with this theory: there weren't enough of the isotopes found in the crust in the evolved magma.

By calculating the effect of fractional crystallisation on the you can show that pantellerites could have been produced by the fractionation of the primitive basalts also found on the island.  But there is more that you can do — you can calculate exactly how much of the original basalt has to be removed to produce the pantellerites.  This will be important later in our story.

There are several different ways of doing this calculation, but all of them rely on the same, simple principle.  If you know the composition of your start and end melts, and you know the composition of the crystals, then you can work out how many of them must have been removed.  When done on Pantelleria rocks, we find that the most evolved have had 96% of the starting material removed through fractional crystallisation.  This is rather a lot.  That means that for each cubic metre of magma erupted 25 m3 initially entered the plumbing system.  The Green Tuff eruption was maybe 7 km3 (although much of it was not the most evolved pantellerite), which means a huge amount of magma must have passed through the magma chamber.

It is here we begin to see why pantelleritic magmas could be more dangerous than other volcanoes.  Basaltic magma carries with it dissolved gasses, two of the most important of which are CO2 and SO2.  SO2 in particular has a large, short term effect on the climate, lowering the global temperature for several years after a large eruption.  These gasses don't fit into the structure of the crystals, so get concentrated in the remaining melt.  The more the melt get concentrated, the more SO2 is there to be released into the atmosphere in an eruption.

However, there is more.  We still haven't answered the question of the Dalay gap.  If fractional crystallisation did form the pantellerites, where did all the intermediate magmas go?  Why were they never erupted?  One possibility is that they weren't there for long.  It is possible to calculate the viscosity (the stickyness) of pantelleritic magmas.  It turns out that they are actually quite runny, much more runny than other magmas with a similar amount of silica (at least at high temperature).  This low viscosity means that crystals forming in the magma can sink quickly, which means that pantelleritic magmas evolve fast and intermediate magmas don't stick around for long.

Not only does this explain the Dalay gap, but it also has consequences for the sulphur yield of any eruption.  Often, the amount of sulphur in a magma chamber will be higher than the amount that can be dissolved in the magma.  The extra sulphur can easily escape, especially if the time the magma spends in its chamber is long.  The quick differentiation time at Pantelleria means that there is less chance for the sulphur to escape, and hence more will be released all at once during an eruption.  In total, David calculated that about 80-160 million tons of sulphur would be released from a Green Tuff–sized eruption.  Compare that to the 9 million tons of sulphur from Pinatubo, an eruption almost three times the size.  Pinatubo lead to a 0.4–0.5ºC drop in global temperatures, so imagine what an eruption of Pantelleria might do.

Of course, there are always caveats.  We haven't been able to measure the sulphur released by a pantelleritic eruption, and so until we do these numbers will remain a bit speculative.  There is also uncertainty over how much greater the impact will be of larger sulphur emissions, as there may not be a direct relationship between the size of these emission and the climatic impact once you get over a certain size of eruption.  Again, the fact we haven't witnessed a truly big eruption in the modern scientific era, so we can't be sure of exactly what effect they would have.  That said, I hope I have convinced you of the use of answering what would at first seem like a fairly academic questions, like whether fractional crystallisation or crustal melting forms a particular composition of melt.