Gareth Fabbro
A new study in Nature shows that Santorini may have reactivated roughly a century before the Minoan "super-eruption", a lot quicker than had previously been thought.  How is it possible to time this awakening?

I have written on here before about magma chambers, and how people initially thought that the chambers of the largest eruptions grew through the slow, incremental process of fractionation.

More recently, the idea has grown of magma mushes, of partially solidified magma chambers ready to be rejuvenated and erupted.  But just how long before an eruption, especially of those large eruptions of over several tens to hundreds of cubic kilometres (often referred to as "super-eruptions") do magma chambers assemble, ready to blow?  Do changes in the decades before occur, changes that could possibly give us warning of impending catastrophe?  We are increasingly finding evidence that yes, short term processes do play a major part in primping these large systems, preparing them for their largest eruptions.

My supervisor has a study out in Nature, which begins to answer the fundamental question of the timescales of these processes, at least for the Minoan eruption of Santorini.  The technique they used is one I will be applying to other eruptions of this Greek island, so I thought now would be a good time to explain it. The Santorini caldera, formed by the Minoan eruption 3,600 years ago.
To begin with, let's just set the scene.  Those of you who follow this blog regularly will have already come across the Minoan eruption, but for those that don't here is a quick recap.  The Minoan eruption took place about 3,600 years ago, and released about 40-60 km3 of magma in one of the largest eruptions to strike human civilisation.  It had major ramifications across the bronze-age world, especially in the Aegean, and left the large caldera that gives the volcano it's striking shape.

So how do you go about recreating the events that occurred before the beginning of recorded history?  You look at the rocks.

This study looked at the crystals that are found in the erupted rocks, in this case plagioclase feldspars.  Plagioclase is a very common silicate mineral in volcanic rocks, silicate meaning that it is made up of a framework of silicon and oxygen atoms (along with aluminium).  The useful thing about plagioclase is that it comes in two varieties, albite with sodium as the major constiuent (chemical formula Na[AlSi3O8]), and anorthite with calcium (Ca[Al2Si2O8]).  Plagioclase found in nature is usually a mix of the two types, with the amount of anorthite or albite depending on the composition of the magma (temperature, pressure and a few other things also can have a smaller effect).  If you know the composition of your plagioclase then you can work out an approximate composition for you magma.  This was what Druitt et al. did for the first part of their study.

What they noticed was that there were different groups of plagioclase, with different compositions.  Adding to the complexity, many crystals had different compositions in their cores to their rims.  By looking at enough crystals, however, a story could begin to be told.  There were two types of cores, one with a high anorthite content that must have come from a more mafic magma, and one that was more albitic and from a more silicic magma.  Inside the anorthitic cores were "inner cores" of even higher anorthite content, coming from a magma more mafic still.  Both of these were overgrown by rims that were in equilibrium with the Minoan magma, therefore they likely grew from it.  The story here is that two magmas, one more silicic than the other, mixed, bringing with them their own plagioclase crystals.  This mixed magma is what was erupted, and the rims of the crystals grew from it in the time leading up to the eruption.  The crystals with inner and outer cores had undergone two mixing events before eruption.

None of this is very new, these mixing events have been found recorded in plagioclase crystals from many eruptions.  What is new is the timescale information the managed to extract, estimating how long before eruption the mixing took place.  They did this using a technique know as diffusion dating, which tracks the rate at which elements diffuse across the crystal.

The theory is fairly simple.  When a crystal grows in one melt, the concentration of impurities is controlled by the concentration of impurities in the melt, along with temperature and a few other things.  If the crystal is then mixed into a new magma then the equilibrium concentration of those element, the concentration the crystal wants to have changes.  Over time the impurites will diffuse in to (or out of) the crystal.  Below is a sketch of what would happen if a crystal went from the red magma to the yellow one.  The graph on the right is the concentration of a hypothetical impurity along the profile marked as a blue line through the crystal on the left.  As time progresses the initial profile smooths out by diffusion, until the entire crystal is in equilibrium with the melt.  The speed at which an element diffuses is strongly controlled by the temperature, so that when a magma is erupted and allowed to cool diffusion effectively stops, "freezing in" any diffusion profile still present. 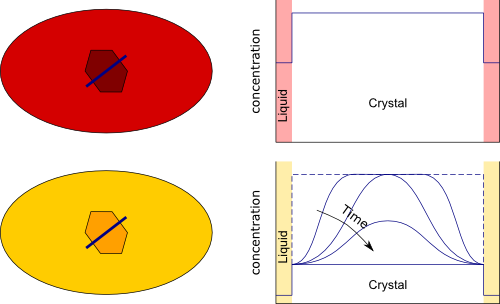 Schematic example of how the concentration of a trace element varies with time due to diffusion.
If we can measure profiles of these impurities in the crystal where they are not in equilibrium with the melt, and if we know the speed at which the impurity diffuses and the initial conditions then the time that the crystal was in the new melt can be calculated.  This is a lot of ifs, but if done carefully useful information can be extracted.  The biggest uncertainties come from estimating the initial concentration and the temperature at which the crystal sat (as the speed of diffusion varies strongly with temperature).

An example for the Minoan, from this study is shown below: 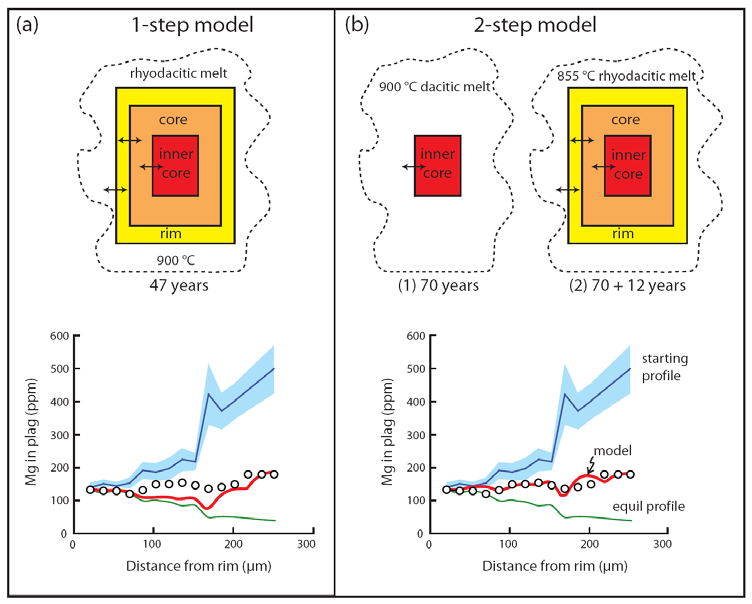 Magnesium profiles from a plagioclase crystal in a pumice from the Minoan eruption.  (a) One-step diffusion model for Mg at 900 °C using a distance increment of 4.1 μm. The circles are the measured profile. The blue line is the estimated initial profile (with 1 σ error range), the green line is the equilibrium profile, and the red line is the model. A 1-step model at 900 °C gives a poor fit of about 47 years for the whole crystal. (b) The 2-step model, involving exchange between the calcic inner core and dacitic melt at 900 °C (70 years) followed by exchange between the calcic inner core, core, rim and rhyodacitic melt at 855 °C (12 years), gives a much better fit.  Taken from Druitt et al. (2012), courtesy of Nature.
The graphs above show the concentration of magnesium as you go from the rim to the core of a plagioclase crystal.  The blue line shows the initial concentration.  In this case it is estimated by comparing with the strontium concentration, because strontium diffuses too slowly to have changed much.  The green line is the equilibrium profile, or the concentration of magnesium the crystal would like to have.  The white dots are the measured data, and the red line is a calculation of the magnesium profile after a certain number of years.  The difference between the figure on the left and on the right is that the one on the right uses two stages to calculate that red line: the first is when the inner core gets mixed into the first magma (the dacite), the second when the inner core and the newly grown outer core gets mixed into the Minoan magma.

It is these diffusion profiles that give the all-important timescales.  What the team found was that the inner cores (red in the diagram above) were mixed in to a silicic magma from an andesite or a basalt a few decades to a century before the eruption.  The (orange) outer cores then grew in this dacite, which was itself mixed in to a more silicic magma a few years before the eruption.  There are some "orange" crystals that were introduced so late into the growing Minoan magma chamber that they grew no (yellow) rims, and no magnesium diffusion was measured.  This means that the longest they could have been sitting in that magma before eruption was a few months.  Mixing therefore likely continued until very shortly before the eruption.

Now the media seems to have latched on to this as some sort of way we can "predict a super-eruption".  There is nothing in this research that directly allows us to do that, and it does appear that many journalists have missed the point of this research.  This technique only works on rocks that have already been erupted, that we can pick up, slice down and stick under various microscopes and such like.  However if it turns out that large eruptions are primed by large magma influxes on human timescales, it does open up the possibility that we may be able to tell when a caldera is getting ready to go.  Knowing what to expect is only the first step in predicting an eruption, and we're not even there yet.  Assuming we are right about what happened before the Minoan eruption, we need to look at other eruptions and other volcanoes to see if Santorini is the exception or the rule.