It used to be that 'eating like a pig' was an insult. A new scientific finding may put that old saying to rest.

Researchers at Johns Hopkins Medical Institute have successfully suppressed the appetite of pigs by removing the blood vessel that allows secretion of that pesky ghrelin hormone.

“There's no major surgery," says Aravind Arepally, M.D., of the John Hopkins University School of Medicine, using a new-ish procedure called GACE (gastric artery chemical embolization). In this procedure, blood vessels connecting the stomach and the fundus are disintegrated by a chemical known as sodium morrhuate. The removal of this blood vessel interferes with the creation of ghrelin since, without a constant blood supply, the fundus can no longer produce the appetite-inspiring hormone. 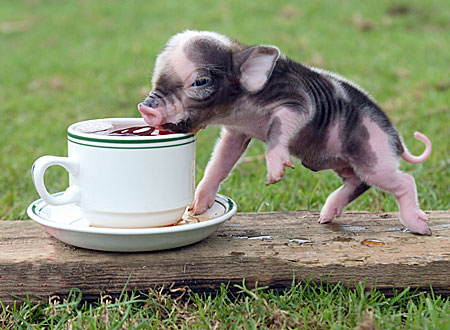 "Efforts to safely and easily suppress grehlin have been met with very limited success," Arepally notes, but his new study could change that. For four consecutive weeks, Arepally and his team studied the effects of GACE in pigs, chosen because of their human-like physiology.

Their findings were conclusive in that pigs treated with sodium morrhuate were shown to have suppressed ghrelin production - nearly 60% lower.

"Appetite is complicated because it involves both the mind and body," Arepally states, which may play a key in why human obesity and consumption is not purely genetic. With emotions and environmental stress causing levels of ghrelin to fluctuate in humans, a sustainable suppressant may cause complications.

(Not that there aren’t any other substances that may suppress appetite, they just aren’t very successful in helping the body completely ignore the want for food.)

By preventing the body’s ability to produce ghrelin, appetite suppression can lead to significant weight loss but that will only help us if this can be applied in humans. Findings suggest that significant grehlin suppression is still a long way off, due to the complexities of our bodies.

So while the researchers chase more sows around the lab, it may be a good idea to take a run yourself. You know, just to steer away from that “pigging out” sort of thing we tend to do.