Home > Physics > Welcome to my Moon Base

Chris Rollins
Millions of 100-megaton hydrogen bombs exploding at once should be enough to tear anything apart, including atomic nuclei. But ever since observations of a solar flare from NASA's STEREO spacecraft in 2006 suggested otherwise, scientists have wondered how a large amount of hydrogen atoms managed to make through the flare seemingly unscathed.

NASA's twin Solar TErrestrial RElations Observatories, or STEREO, observed the massive December 5, 2006 solar flare event as it happened. The event was classified as an X9 on a scale where even an X1 is considered a large flare. Energy from the flare should have been enough to tear any molecule apart - it was the largest solar flare observed in the last thirty years - but for a full 90 minutes after the first particles hit the STEREO spacecrafts, the instruments on board registered nothing but intact hydrogen atoms. Then, after a thirty minute period where the particle counter dropped to background levels, the spacecraft was hit again, this time by the particles they expected to see: protons and heavy ions, such as helium, oxygen, and iron. 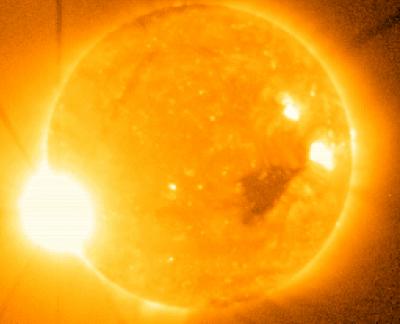 Solar flares are caused by dramatic changes in the Sun's magnetic field. The change in field strength causes charged particles to accelerate to high velocities and smash into each other, destroying the atomic structure of neutral particles in the region and reducing every particle to its constituent protons and neutrons. Leftover protons and ions are then ejected into space, bathing the Solar System in charged particles. Understanding solar flares is very important, because the particles ejected can be devastating to spacecraft and astronauts, damaging instruments and subjecting astronauts' bodies to extra radiation.

Now, scientists think that they have gotten to the bottom of the mysterious hydrogen particles. The prevailing theory is that the hydrogen particles didn't actually survive the flare, but did manage to acquire an extra electron before leaving the Sun's atmosphere. This would have created the neutral hydrogen atoms that STEREO detected and also accounted for the delay of the charged particle detection. The Sun has its own magnetic field, which affects any particle with a charge - but the neutral hydrogen atoms would have been able to sail through the field without being diverted while the charged particles had to take a highly detoured route (on the order of the distance from the Sun to Mars) because they were deflected by the magnetic field.

Richard Mewalt of the California Institute of Technology described the effect of the Sun's magnetism: "Ions are electrically charged and they feel the sun's magnetic field. Solar magnetism deflects ions and slows their progress to Earth. Hydrogen atoms, on the other hand, are electrically neutral. They can shoot straight out of the sun without magnetic interference." 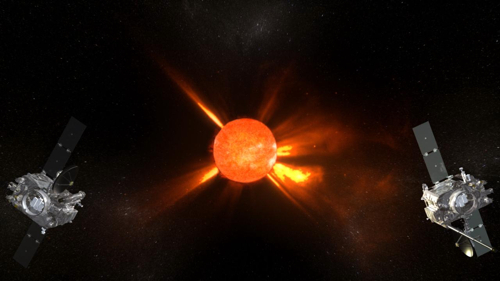 Acting in Concert: The STEREO spacecraft observe the sun from two different vantage points, allowing for triangulation of event locations on the surface of the Sun. Photo Credit: NASA.

Eventually, Mewalt hopes his theory will be verified by the STEREO spacecrafts. Now, they are positioned far apart, so that they can view the Sun from two different angles. This positioning allows for triangulating the location of an event on the Solar surface. At the time of the 2006 flare, however, the spacecraft were not in their final orbits and were therefore not far enough apart to register anything differently. Determining the source of the hydrogen would validate Mewalt's current theory.

"All we need now," says Mewalt, "is some solar activity."
Welcome to my Moon Base
More Articles All Articles
About