Tommaso Dorigo
It is galaxy season in the northern hemisphere, with Ursa Mayor at the zenith during the night and the Virgo cluster as high as it gets. And if you have ever put your eye on the eyepiece of a large telescope aimed at a far galaxy, you will agree it is quite an experience: you get to see light that traveled for tens or even hundreds of millions of years before reaching your pupil, crossing sizable portions of the universe to make a quite improbable rendez-vous with your photoreceptors.

The galaxies at the limit of visibility will channel only a few thousand photons per second inside the optical path of your telescope. The chance that those photons, among all those sent out from that distant galaxy in five billion years, make it there and get detected by your eye is of the order of a part in 10^69. That's quite a number!! If I took the protons of one of my blood cells and I dispersed them in the universe, you would believe that the odds that a random proton belonged to the dispersed set are kind of slim... Well, those are about the same odds as those of a photon from that galaxy to get to your pupil! [*]
I find the above so incredibly fascinating that it is a compelling enough reason to fill my car with 60 kg of equipment and a significant amount of warm clothing, drive a couple of hours toward the remotest spot of the eastern dolomites, and set up my telescope in the middle of nowhere, fighting sub-zero temperatures and sleep deprivation to give those photons their due chance.

So after a hiatus of almost three years, on Sunday I traveled to the mountains equipped with my 16-inch Dobson telescope for an observing session. I chose a place called "Casera Razzo", near an alpine pass at 1800 meters above sea level. It is surrounded by mountains and sufficiently far and screened from the obnoxious polluting lights of the pianura padana. There, the moonless sky often reaches visual magnitudes of 21.5 per square arcdegree. It is _the_ most important factor to allow faint galaxies to become visible.

In the afternoon thick clouds from heat convection had formed over the mountains, but luckily, as the sun set and temperature dropped to zero, the sky became completely clear. It took me and Kalliopi about 20 minutes to assemble and properly collimate the telescope, and finally we started our observing session.

During four hours of stargazing we observed a large number of objects. Among those I remember dearly I will only comment on the following: 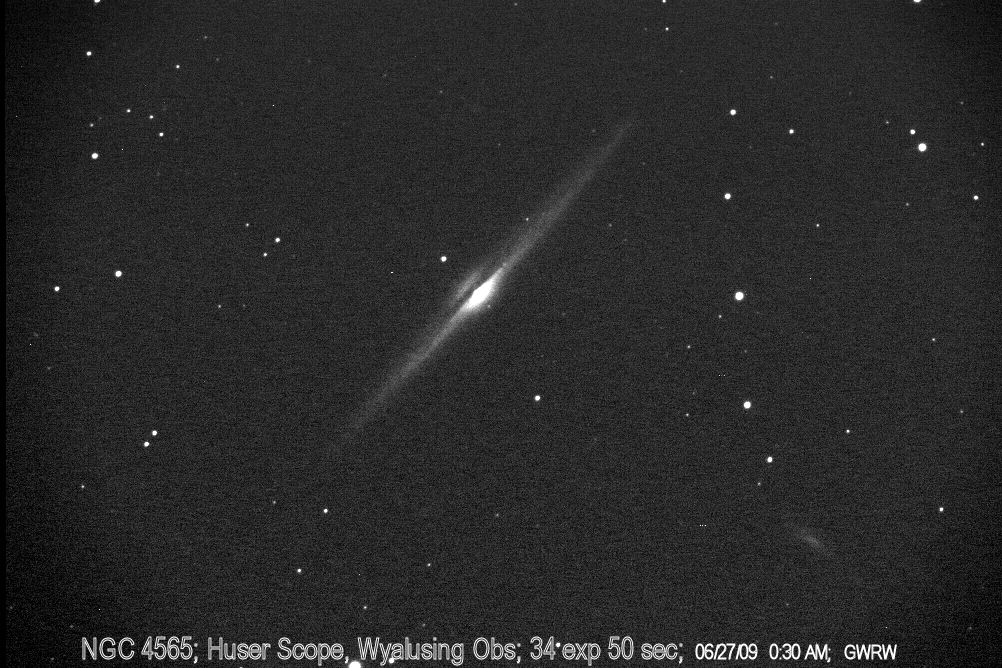 - NGC4565 and its companion NGC4562: this edge-on galaxy shows a dark bands along its full length, and it is quite a showpiece under dark skies. I had observed it in many other occasions but this time it made a true impression. The view from the eyepiece was quite similar to the one seen in the picture on the right. (image credit: www.starsplitters.org) - NGC 3718 and its faint companions: this is a odd-shaped galaxy in Ursa Mayor, which sits close to a quintet of tiny galaxies all in the Mv=15-16 range. These are tough to observe even with a 16" telescope, but the very low turbulence of the night made four of them a relatively easy target.


The image on the left is unfortunately *not* similar to what was visible at the eyepiece - but it is a fascinating shot and I decided to use it here for illustrative purposes. The small galaxies at the center top are the ones I mentioned above. (image credit: apod.nasa.gov).

Besides deep sky objects, we spent about half an hour watching Jupiter. The very low turbulence allowed steady observation at 400x magnification, and we even tried 800x - the planet looks enormous at that power. Jupiter was showing its "unfashionable" side, the one opposite to the giant red spot. But its disk was very rich with details in the bands, with festoons and storms.

All in all, a very rich observing session. I decided I will have another one next month, hopefully coordinating with a friend, Mauro, who owns a 24-incher...


[*] I believe it is a good idea to share my back-of-the-envelope calculation here, as it could be wrong by a few orders of magnitude... :)