When I was in my late teens, my father (a chemical engineer) took an interest in quantum mechanics.  Two words from his conversation at that time stuck in my mind, namely Hamiltonian and eigenfunction.  The former was almost certainly due to the Scottish part of my ancestry, but with the latter it was the word itself.

Indeed, it at first sight seems quite an intimidating word, along with its relatives eigenvalues and eigenvector.  Fear not – I will show you that it despite its fearsome bark, it has a very soft bite.

I will start at the kitchen sink, just as the spaceship is going into orbit (no, I don’t mean that, I mean that the washing machine has started its final spin cycle.)  In front of me is a bowl full of rinsing water, and as the motor speeds up different patterns of ripples appear on the surface of the water, one giving way to the next.  Instantly I recognized these as the figures named after Ernst Chladni.  From Wikipedia:

Today an electronic version of this technique is widely used by makers of instruments of the violin and guitar families.  Here is a 500 x 273 picture of the Chladni figures of a guitar. 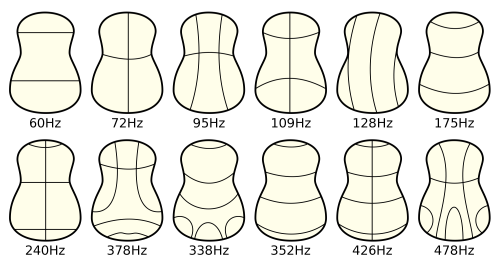 Now just over 1% of Google hits on “chladni guitar OR violin” contain the word “eigenmode”, which suggests that this word refers to something like the “natural modes” of the instrument.

So where does the “eigen” bit come in?  The thing itself (not the word) entered mathematics in the early 18th century through mathematicians[1] investigating the vibrations of strings, beams, systems of springs etc.  By setting up systems of several equations, and solving them simultaneously, one can derive characteristic motions with particular frequencies.  The solutions to these equations correspond in the physical world to things like the harmonics that a guitarist can get out of one string.

However, once the systems get complicated, one easily gets lost in the Black Forest of Equations.

The potential for much simplification of effort came about with the invention of matrices by Arthur Cayley in the middle of the 19th century, but they didn’t really catch on until about 1925 with their adoption by Max Born, Werner Heisenberg and Pascual Jordan in the newly developing quantum mechanics.  Depending on the number of dimensions, quantum mechanical systems show considerable similarity to guitar strings, drum skins[2], or wobbling jellies.  And they don’t stop at 3 dimensions, because to model strange things like electron spin, one needs to go to higher or complex dimensions.

And just as a bell gives out tones at strange but fixed combinations of frequencies, isolated atoms in the atmosphere of the Sun emit or absorb radiations at particular frequencies, all of which satisfy the quantum mechanical equations.  Then one gets on to molecules, or systems of atoms in a crystal …

Now much of the early quantum mechanical literature was written in German, and the word for these “characteristic values” or the equivalent “proper values” is “Eigenwerte”.  And someone around 1930 or 1931 decided to transfer the “eigen” prefix to English.  Now some people, for example Sheldon Axler, dislike this linguistic chimaera.  The test might be, is it useful?  I think so, and I will explain why further on.  But first let me “detox” the words a little by explaining their roots.

This table shows the relationship of the English and German words, via the Anglo-Saxon tongue.  So it’s not such an alien construction after all!

Even so, is it helpful?  I think yes, because it describes linking characteristic behaviours of the system as observed or used, with the parameters of those behaviours as they emerge from the mathematical model describing the system. As a simple example, Mary Lunn calculates the three eigenfrequencies of a swingboat, which emerge according to whether the occupants rock it back-and-forward, or side-to-side in phase or antiphase.  As I remember, two of the frequencies are equal (or degenerate, as they say), but the book is at present buried under some stuff, so I can’t tell you which.)

So there is really no need to shoot down Baron von Eigen, as he’s quite a helpful chap after all. 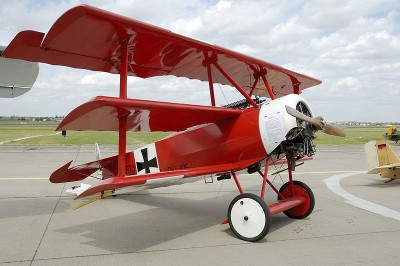 Since writing this, I have found that the Earliest Known Uses of Some of the Words of Mathematics site is back up again (I couldn’t find it for a while.)  You will find

about a tenth of the way down the E page.  It is very interesting but complicated reading.  It is possible that David Hilbert, who introduced eigen- usage in mathematics, may have taken it from words like Eigentöne in acoustics.  Back to our violins and guitars again!

[2] It was the representation of a 2-D quantum system as a rectangular drumskin in Why Beauty Is Truth: The History of Symmetry by Ian Stewart which gave me the idea for this article.