Are ancient remedies any good?  In scholarly circles the middle of the 20th Century, they didn’t seem to think so.  For example:

‘Survey the mass of folly and credulity that makes up Anglo-Saxon leechdoms, it may be asked: “Is there any rational element here? Is the material based on anything that we may reasonably describe as experience?” The answer to both questions must be “Very little”.’ [1]

But in the last few days we have been reading

A one thousand year old Anglo-Saxon remedy for eye infections which originates from a manuscript in the British Library has been found to kill the modern-day superbug MRSA in an unusual research collaboration at The University of Nottingham.

I am not going to describe this in detail, since the linked article is a much better read, and the YouTube presentation above is much more lively and entertaining.  If you have only limited time, read or watch one of those.  However, this has not simply come out of the blue.

Since the 1950s, we have become much more respectful of the efforts and accomplishments of ancient and indigenous peoples (though while we may regard the Anglo-Saxons as ancient, the Welsh will certainly not allow them the epithet ‘indigenous’.)  M.L.Cameron concludes his book on Anglo-Saxon Medicine [2] with the wise injunction
‘Never suppose your ancestors to be less intelligent than yourself.’

A most significant one among these remedies, Cameron argued, was that for an eye stye found in Bald’s Leechbook, a medical text probably from the 9th Century.  According to the Online Etymological Dictionary the word leech is :

It is not necessarily of the same origin as the bloodsucking worm, although the use of leeches for bloodletting in the early modern era led people to identify the two words.

Here is a picture of the Leechbook itself.  Reading Old English manuscripts requires a bit of practice.  In addition to some addition letters such as æ and þ, many of the letter forms are unfamiliar.  The large letters looking like “P” at the beginning of the paragraph are actually “w”s, and there are other differences also.  The hooks like “7” are abbreviations for the word “ond” meaning “and”. And here is the recipe under consideration:

This is a view of the recipe itself: 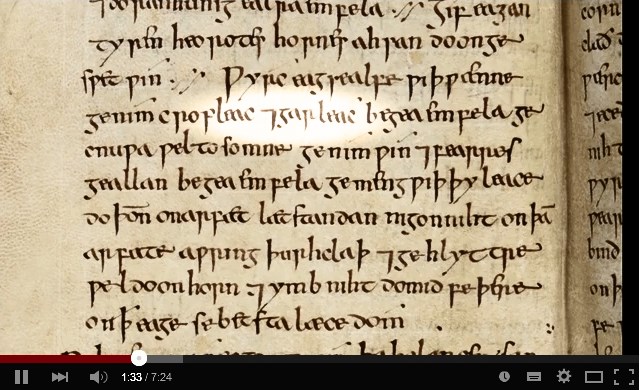 Take “cropleek” and “garlic” (highlighted) in equal measure, pound them well together; take wine and oxgall in equal measure, mix them together with your “leeks”; put them in a brass vessel, let them stand in the vessel for nine nights, drain through a cloth and ??? well and at night-time apply with a feather on the eye: [this is] the best remedy.

Some of the other recipes appear too far-fetched [4].  But nearly ten years ago, a group connected with Wheaton College (Massachusetts) tried out this recipe, following Cameron [2] who assessed this one as potentially the most effective, and published their results in

A reassessment of the efficacy of Anglo-Saxon medicine

Reference [4].   They tested this mixture, and partial mixtures of its components, on Escherichia coli, Staphylococcus aureus, Streptococcus mutans and Mycobacterium smegmatis.  They discussed carefully what the components were: “cropleek” and “garlic” were certainly members of the Allium (onion and garlic) genus, but what were they?  The word “garlic” is, etymologically “gar leek” where “gar” means “spear” as in the name “Oscar” which means “Spear of the gods” (hardly fitting for that formless statuoid that they hand out in Los Angeles.)  But does it correspond to today’s garlic?  Even heritage varieties only date from the 19th Century.

They decided that Fearres geal was almost certainly oxgall, bile recovered from the gall bladder of a bovine animal, usually a cow or ox.  They used commercially available dehydrated oxgall, which comes in the form of a foul-smelling brown-yellow powder, and mixed it with distilled water to reconstitute the bile.

And what sort of brass was used?  Garlic and onions, bile salts, and copper all have well-documented antibacterial activity.  Alas, neither the full remedy nor sub-mixtures of its constituents seemed to be of much effect against any of the bacteria.

So what difference is there between their results and the recent ones?  Why did the earlier experiments show little or nothing, while at Nottingham they report success?  Both groups constituted a cooperation between scientists and an Anglo-Saxon expert, so the difference does not seem to lie there, although a Hogwartsian University of Nottingham video https://www.youtube.com/watch?v=9iqr-KeYMBs might suggest that only members of Ravenclaw House can effectively produce this potion.

However, one thing stands out to my mind.  The earlier group used reconstituted dried oxgall, which may have lost its efficacy in the process, maybe with an essential enzyme becoming denatured.  Any other suggestions welcome.

[3] In Bald’s Leechbook agrimony was cited as a cure for male impotence – when boiled in milk, it could excite a man who was “insufficiently virile;” when boiled in Welsh beer it would have the opposite effect.(Wikipedia)