SafeTraces: Biological Barcoding Could Contain Health Contamination Crises, So Why Is It Controversial?
By Genetic Literacy ... | June 17th 2015 06:30 AM | Print | E-mail 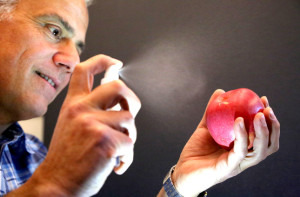 Blue Bell Creameries has been battling a Listeria monocytogenes outbreak for the past five years. The potentially killer bacteria was found in ice cream served at a Kansas hospital and sold by retailers. Reports most recently are blaming plants in Alabama, Oklahoma and Texas.

The outbreak triggered a product recall of all Blue Bell ice cream and affected nearly a dozen people across four states. Health officials used genome sequencing to identify the source of the problem, but not before three people died.

It’s possible that a single swab of DNA could have prevented this crisis or at least mitigated the damage. That’s what I was told by Anthony Zografos, the founder and chief executive officer of SafeTraces (formerly known as DNATrek), a developer of biological barcodes. He pointed to an outbreak of E. coli in 2006, which Dole baby spinach originating from a single farm in California sickened hundreds and left three dead.

SafeTraces’ biological barcoding technology is a response to growing food fraud and contaminations that costs the food industry tens of billions of dollars per year, including a $70 billion-plus price tag for foodborne sickness in the United States and $15 billion for fraud, according to SafeTraces statistics. The FDA’s Food Safety Modernization Act, which is focused on preventing food contamination and is in the process of being finalized, would require food producers to implement food safety plans.

Dubbed DNATrax, the technology is DNA extracted from seaweed and plants combined with sugar, resulting in an odorless and tasteless substance. It’s is applied directly on food and was approved by the U.S. Food and Drug Administration last year, as what the company originally characterized as a food additive.

If fully implemented, DNA barcoding may stop food fraud and outbreaks in their tracks in a fraction of the time and cost current methods including genome sequencing command.

DNATrax was initially developed by the Lawrence Livermore National Laboratory and later licensed to SafeTraces.  The technology was originally meant for the biodefense sector, but Zografos saw an opportunity to expand it into food, introducing a potentially industry disrupting technology.

DNATrax can trace a food item through the supply chain down to the “field, crew, machine and date” of production. It can determine if food has been adulterated or identify the source of suspected contamination in a matter of minutes compared to about 10 days for methods such as genome sequencing, which at best can trace a product back to a specific region. Biological barcoding, meanwhile, can even determine whether a food item originated at a farm for genetically engineered crops or organic crops.

“There is some other [DNA tracking technology] using genetic markers but it is not for traceability and not for food products. It is for mechanical parts, electronic components etc,” said Zografos.

Applied as a spray or mixed in with liquid goods in infinitesimal quantities somewhere along the supply chain, DNATrax is made from very short pieces of DNA that are 100 base pairs long, paving the way for an essentially unlimited number of barcode possibilities.

Scientists at The Swiss Federal Institute of Technology in Zurich also developed DNA barcodes that are applied directly to foodstuffs. Similar to SafeTraces, the Swiss DNA barcode is made from extremely short DNA sequences. Unlike SafeTraces, however, the DNA is encapsulated in silica particles, which makes the DNA synthetic.

The Swiss university’s DNA barcode can be used on just about any food item including milk and can still be detected even after the milk is used to make other dairy products, such as yogurt or cheese.

As new technology makes its way to the U.S. mainstream, however, market observers are concerned that consumers and environmental activist groups might reject what is seen as another layer of additives on food. The presumption is not much of a stretch in an age in which food transparency has become paramount.

Duncan Campbell, a pubic analyst for West Yorkshire Analytical Services, suggested sweeping changes to additives laws in the European Union would be required in order for the DNA barcode to make it to the grocery aisle. Silica is only approved to be used in a limited number of food items and milk’s not on the list.

“There is potential consumer opposition; it’s got the makings of a tabloid scare story,” Campbell said.

The Swiss Federal Institute of Technology’s Robert Grass, who led the group of scientists that developed the university’s DNA barcode, suggested it’s an issue that’s open for discussion.

“‘The main question at hand is if the risk of adding our technology to foodstuff can be balanced with the need for foodstuff traceability. These are questions we cannot answer on our own – they require an open discussion with the public and regulatory bodies,” said Grass in the article.

David Turner, a global food and drink analyst at Mintel in London, addressed potential resistance to additives used to verify foods, such as strains of lactic acid being added by some European cheese makers to pave the way for eventual DNA testing. According to Turner, this could “help counter fears over food scares and boost trace-ability.” But he also warned of potential consumer backlash, saying:

“…this does bear all the hallmarks of consumers’ fears over “Frankenstein food” and too much science involved in standard foodstuffs. There could be push back from consumers or lobbyists concerned over additives in food.”

According to The Pew Charitable Trusts, there are “more than 10,000 additives allowed in food. In hindsight, calling SafeTraces’ biological barcode a food additive might have been a mistake, according to CEO Zografos.

“We used that term [additive], but it’s probably not entirely correct,” he told me. “It’s like a food [product]. What we want to say is it is FDA approved for people to eat. It presents no risk; it’s a natural material. We said it’s approved as an additive. You can call it an additive but it’s not.”  Zografos might need to make that clear given the negative perception of food additives.

The use of DNA on the barcodes is really a function of the company’s origins servicing the biodefense industry.

“The origin of the technology and the company was in the biodefense area, where DNA is a good thing. People like to hear about DNA,” he said in this video clip.

“There’s a ton of DNA on food already. People touch it, sneeze next to it. DNA is being added all the time. So the only thing we do is use an intelligent way to organize that plant material so it acts as a barcode, a printable barcode. The amount of material that we put on an apple or any piece of produce is one-billionth of a gram,” Zografos told me.

SafeTraces is targeting high risk products such as apples, cantaloupes and eggs, for instance, where contamination can trigger foodborne illnesses, as well as high-value items that are often the subject of fraud ranging from olive oils, to seafood and Italian truffles.

For its part, SafeTraces’ biological barcode is expected to reach the U.S. commercial market later this year and will primarily be available to distributors, retailers and regulators.

“In the future consumers will be able to pick up an apple and read the origin of that apple, plus other information,” Zografos said.

While SafeTraces’ technology is known for its ability to trace a food item back to its origin, it might also be used to track genetically modified or organic products and ingredients along the supply chain. GMO and non-GMO products inevitably get mixed up, not as a deliberate act or as a result of fraud. This technology could help contribute to food transparency at both the wholesale and retail levels.

“If a GMO product is marked properly, than it doesn’t allow room for mix up or confusion,” Zografos said.

Gerelyn Terzo is a freelance journalist residing in New Jersey who, in addition to the Genetic Literacy Project, contributes to Global AgInvesting and InvestorPlace.com. Follow @gerelynbiz on Twitter.  Republished from Genetic Literacy Project. Read the original here. Top image: Anthony Zografos, founder and CEO of DNA Trek, sprays a solution on an apple that will allow researchers to trace the apple back to its original source.