Gerhard Adam
A recent article titled "Our Brains Can't Evolve Any Further" drew my attention which ultimately lead me to the paper "Why Aren’t We Smarter Already: Evolutionary Trade-Offs and Cognitive Enhancements" (Thomas Hills and Ralph Hertwig; University of Basel).

Fortunately, this offered some interesting insights into the assumptions and conditions surrounding human intellect and its evolutionary implications.

In effect, we have seen various pharmacological enhancements of the cognitive process promoting improved school performance, reduction in age-related cognitive declines, etc.  Therefore it is reasonable to pose the question of why these pharmacological enhancements don't seem to display similar improvements in "normal" individuals.  In addition, there has always existed a presumption that cognitive improvement was largely a linear process, with the implicit assumption that "more is better".

More memory is better; more focus is better; more self-control and willpower are better; and so on. Just as we cherish faster processing speed and larger memory in our digital electronics, we may assume that boosting a particular cognitive trait will bring better mental performance and affective well-being. (1)

The question is posed that if these improvements can occur through drugs and if the relationship of improvements is largely a linear process, then why have we not evolved in that direction?  It would seem that the benefit of such traits would have been an ideal candidate for natural selection to have operated on almost indefinitely.  However, as pointed out by the authors, "all known evolutionary trajectories inevitably run up against constraints that prevent such runaway selection".

Specifically the point is made that cognition must deal with all manner of attention-switching problems for which there are often poorly defined criteria for indicating the completion of a task or objective.  As a result, the success of the system is achieved through balancing various aspects of cognitive performance by ensuring that no specific trait dominates to the exclusion of others.

While this doesn't suggest that cognitive processes cannot be improved, it clearly indicates that one must be careful in assessing what constitutes improvement so that declines in abilities elsewhere are not masked or ignored.  It also suggests that the simple "more is better" perspective doesn't hold over the cognitive system.

This gives rise to a performance curve that will peak and then begin to decline, suggesting that there are upper bounds to the improvement of any particular cognitive trait, before it begins to impact other traits.  A balance must be maintained so that subgoal achievement can be maximized.

The paper proceeds in giving several examples of pharmaceuticals being used and how the results are more pronounced in those below certain thresholds, rather than those with normal cognitive abilities.

Additional discussion introduces the idea that there will be trade-offs between various cognitive domains when any particular trait experiences enhancement gains.  In effect, it becomes "too much of a good thing" and the overall abilities begin to suffer.

In conclusion, there is nothing to specifically prohibit enhancements to human cognitive processes, although current evidence suggests that it is extremely unlikely as things currently stand and would require significantly novel approaches.  One major consideration should be the need to ensure that a sufficiently wide search for side-effects is conducted before drawing conclusions on the efficacy of any particular enhancement.  In effect, it may be that our brain doesn't "need" to get any better.  Much like computers, where speed limitations have been reduced by increased parallel processing, it may be that whatever limits exist in our minds, are also reduced by our specialized division of labor (a social form of parallel processing) which allows significant collective technological progress.  If this is true, it would suggest that, evolutionarily, we have already embarked on natural selection's path for human cognitive improvements by promoting a more eusocial adaptation rather than an individual one. 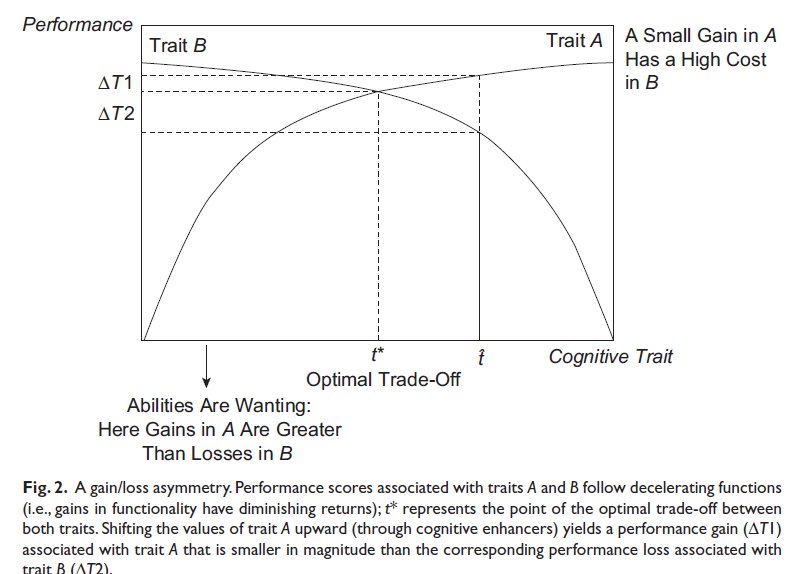