When forests are logged, managed or selectively trimmed so they’ll be less susceptible to raging fires, there are usually huge piles of stumps, branches and other wood debris left laying on the ground. Now a group of researchers at the University of Washington in Seattle is developing a portable technology to turn these waste piles into treasure troves by converting them into biochar; charcoal made from plant material that can be burned for energy or applied to soils, where it helps plants grow.

“This is a way to take a lot of carbonaceous waste and convert it into a [valuable] product,” says Daniel Schwartz, who chairs the Department of Chemical Engineering at the University of Washington and leads the team of PhD students who developed the biochar conversion technique. Three of those students and are launching a company, now called Carbon Cultures, to produce and sell the char as a soil additive. In October, the National Science Foundation awarded the group a $50,000 grant to commercialize their technology.

The amount of potential energy in woody waste across the United States is roughly comparable to that in the oil pumped out of Alaska, Schwartz says. But instead of being concentrated in one place, like an oil reserve, the wood scrap is collected in several-ton heaps called “slash piles” all across the nation’s timberlands, where it’s produced. Carting those piles from remote forests to industrialized areas to be converted into fuel would be expensive and potentially use up as much energy as it produced, so they’re usually either left to rot or burned in open air so they won’t feed catastrophic forest fires later on. In the Pacific Northwest alone, the forestry sector annually produces about 6 million dry tons of this refuse. 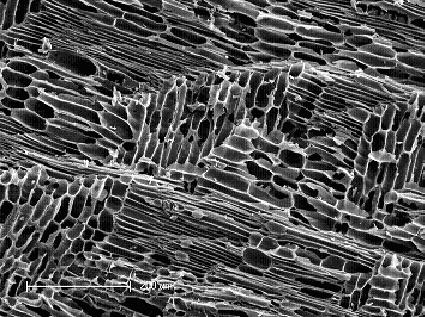 Instead of dragging the mountains of wood to the processing facility, the University of Washington team wants to bring the processing facility to the mountains in the form of a heat-resistant laminate “blanket” that can be wrapped around a slash pile to form a biochar-baking kiln. Light enough to carry in the back of a pickup truck, the wrap material is impermeable to air, and it’s punctuated with a number of adjustable vents that can control the flow of air into a slash pile like the airholes in a backyard barbecue. A fire needs oxygen to burn; when its flow is restricted by closing off the vents, the plant waste doesn’t combust but instead undergoes a different chemical process called pyrolysis, smoldering slowly and leaving chunks of solid carbon, or biochar, behind.

That biochar can be burned for energy, but since coal is still significantly cheaper, it’s unlikely to be competitive in that market, Schwartz says. For agriculture, however, biochar has unique appeal: when spread around crops, it stabilizes the soil and helps it retain water and nutrients so farmers can irrigate less often, use less fertilizer and grow healthier plants. Since different types of soils benefit from different types of biochar, the Washington group made the vents adjustable on the pyrolysis blanket. That way they can control the speed and temperature at which the material smolders, resulting in char with different chemical properties.

“If it’s just going for energy, we can tailor it to that; if you want to use it as a soil amendment, we can tailor it for that,” says Jenny Knoth, a plant scientist and University of Washington doctoral student who is running the startup along with engineering student Ken Faires and urban planning student J.D. Tovey III.

In pilot studies on half-ton slash piles, the pyrolysis blanket converted wood waste into biochar with 20-30 percent efficiency, Knoth says. Compared to an open fire, the covered process significantly reduces the amount of smoke and particulate pollution released into the air. This summer the team will conduct field tests to see how well the technology scales up to larger slash piles, to measure the soot and greenhouse gas emissions and to adjust the process in hopes of eliminating them. “We want to get rid of all of that so that it is truly, unassailably clean,” Schwartz says.

Whether or not they can completely scrub the conversion process, biochar production should help nurture healthier forests, according to Schwartz. Forest restoration projects frequently involve clearing smaller trees and debris—as a moderate natural forest fire would do—so they don’t become kindling for a catastrophic fire. Such raging fires have been a serious problem in the West in recent years, as a result, many believe, of many years of suppressing natural burns. Turning cleared debris into valuable biochar could help fund further restoration efforts, which currently have no immediate economic benefit, Schwartz says—and returning forests to their natural state is unquestionably a net benefit for the climate.

Mara Grunbaum is a science and environmental reporter whose work has appeared in Discover, Popular Science and OnEarth magazines, among others...