Nobel In Physics: A Prize For Outstanding Discoveries Or Socio-Political Recognition?
By Martín López Corr... | November 12th 2019 06:56 AM | Print | E-mail

This year the committee of the Nobel Prize in Physics has gifted humanity with a poetic touch: “for contributions to our understanding of the evolution of the universe and Earth’s place in the cosmos”.

The Nobel Prize in Physics 2019 was awarded for one half to James Peebles “for theoretical discoveries in physical cosmology” and for the other half to Michel Mayor and Didier Queloz “for the discovery of an exoplanet orbiting a solar-type star”. We might discuss how much outstanding is the latter contribution to Physics, but at least we precisely know which discovery is awarded. On the other hand, we cannot say the same about the particular discovery of cosmology awarded and it does not seem to fulfill Alfred Nobel’s will, which was to endow “prizes to those who, during the preceding year, have conferred the greatest benefit to humankind”.

According to the Nobel Committee James Peebles has given “insights into physical cosmology [that] have enriched the entire field of research and laid a foundation for the transformation of cosmology over the last fifty years, from speculation to science. His theoretical framework, developed since the mid-1960s, is the basis of our contemporary ideas about the universe”, to conclude with “The results showed us a universe in which just five per cent of its content is known, the matter which constitutes stars, planets, trees – and us. The rest, 95 per cent, is unknown dark matter and dark energy. This is a mystery and a challenge to modern physics”.

Basically, the committee reminded us of the importance of cosmology. However, it only refers to a general description of the field without mentioning specific achievements. It is certainly true that Prof. Peebles’ contributions have influenced modern theoretical cosmology, inspiring many researchers with his master lessons, his books and papers, but this is not the same as making an important discovery. 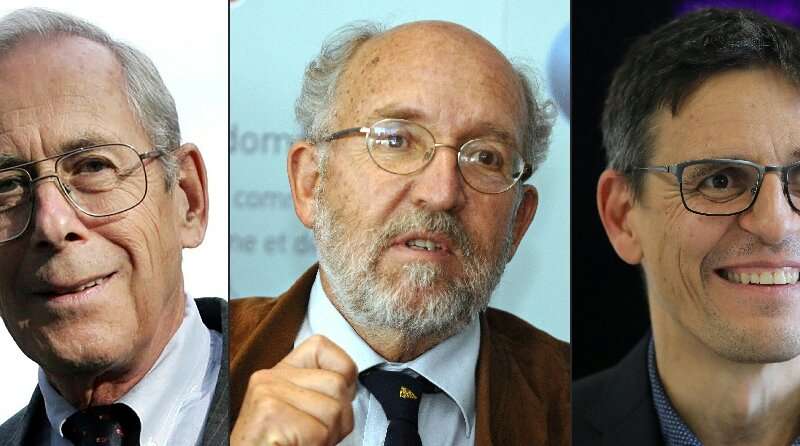 Theoretical discoveries in physical cosmology alluded to in the Nobel Prize motivations are those that have imposed the so-called theory of Cold Dark Matter as the cosmological reference theory. This theory assumes that 95% of the matter of the universe is dark, which means the universe is made of matter that is, at best, seen only indirectly and mainly through its gravitational effects, as for example gravitational lensing. No doubt that a part of the matter in the universe does not emit light, hence it is dark, while contributing to the gravitational field of astrophysical systems.

However, parts of this dark matter could very well be the ordinary matter (i.e., baryonic) that we experience everyday around us. In the standard model, cosmological dark components account for much more than that: 25% is non-baryonic dark matter and 70% is a form of energy, repulsive to gravity, called dark energy. The latter goes beyond the standard model in particle physics and has not been detected in any experiment on Earth, despite huge efforts over the past twenty years.

At CERN (Conseil Européen pour la Recherche Nucléaire), researchers accelerate particles and make them collide to explore new energy ranges, but the large-scale experiments (e.g., the underground astro-particle laboratories, such as the  Laboratoire Souterrain de Modane, the Laboratorio subterráneo de Canfranc, the Boulby Underground Laboratory and the Gran Sasso Lab) aiming at discovering particles coming from high-energy, astrophysical events have not been yet successful  despite many billions of dollars invested.

Dark energy has instead a different origin: it was firstly introduced by Einstein himself to obtain a stationary solution of the universe. The astrophysical value is derived from indirect observations, once the geometry of large-scale universe is assumed to be of a certain type. And it is estimated to be 120 orders of magnitude larger than the value expected from fundamental estimations based on quantum field theory. Other possible explanations have been recently proposed, but at the moment we can only say that we have no idea of what dark energy is, not even that it is something at all, and we cannot exclude that it is an artifact. So dark energy is a speculation, ultimately derived from the Friedmann’s solution of Einstein’s theory which describes the coupling between space-time and matter, that is, the Theory of General Relativity.

Friedman’s solution is not only the unique exact solution of these equations in the cosmological context, but it is also the simplest one. The problem is, therefore, the continuous adaptation of any observational data to this solution. This has generated a model with 95% of very specific kinds of dark components with ad-hoc properties, and much more, including a period of exponential expansion of the universe with a speed faster than that of the light, known as “inflation”.

Nonetheless, even if no theory is currently able to explain what dark energy is, there are observations that can be associated to the speculative idea of a dark energy, in particular the loss of flux in supernovae at high redshift. The Nobel Committee has already demonstrated to have a penchant for this speculative hypothesis (not discovery yet), by assigning the Nobel Prize in Physics in 2011 “for the discovery of the accelerating expansion of the Universe through observations of distant supernovae”. Comparing predictions obtained with and without accelerated expansion yields a very slight difference of distant supernovae luminosity observed that be explained in many other alternative ways that do not imply introducing an exotic dark energy component.

Again and again, the Nobel committee simply ignores the very many alternative works that flourish in the field of theoretical cosmology, for instance the attempts to find solutions of the Einstein’s field equations that include inhomogeneities or the attempts that try to explain the various observations on galactic scales

This new trend goes against the tradition of the Prize, which instead was usually conservative. We must remember for instance that Einstein did not receive the Prize for any of his genius developments in special or general relativity, but for the photoelectric effect, because, among other things, the first theoretical contributions were considered too speculative at that time. Not even Hubble has received Nobel Prize for the discovery of the expansion of the Universe, in part due to the lack of consideration of astrophysics as deserving Nobel Prize in Physics, but certainly the discovery of the expansion was more important than the speculative hypothesis that there may be an acceleration of the expansion.

Times have changed and the new trend seems to assign the recognition to hypotheses rather than to discoveries is confirmed by the 2019 physics Nobel Prize: in contrast to 2011’s one, in this case the Prize is not even awarded for a discovery but for a career, something like an honorific recognition rather than a Prize to “the person who shall have made the most important discovery or invention within the field of physics” as statute of the Nobel Prize point 1 reckons

Moreover, Peebles’s contribution also includes the analysis of the galaxy correlation function (one of his most cited papers) which is central to the interpretation of cosmological density fields and which was highly criticized because of its basic inconsistencies, giving rise to controversial debates. Peebles contributed to the early interpretation of the Microwave Background Radiation in terms of the standard cosmology, although he has played a secondary role in it, and the Nobel Prize for that discovery was already assigned, in 1978, to Penzias and Wilson. Hence, we may ask again: why has the Nobel prize been assigned to Peebles this year? The assignment of the Nobel Prize to such a speculative and fragile model of the universe (as probably any model of the universe) can only been understood as a socio-political recognition rather than an award to a truly fundamental discovery.

We think this is the hallmark of a deep crisis within the institution of the Prize and of their current vision of science. The Nobel Prize‘s assignment, given its prestige, powerfully influences general public and new generations of scientists, which are lead to believe there is a model of the universe as solid as the model of the matter around us, while this is really untrue

Many times we have read of controversies about the political motivations of the Nobel Prize for Peace or for Literature or the “The Sveriges Riksbank Prize in Economic Sciences in Memory of Alfred Nobel” that is unfortunately known as “Nobel for Prize for Economics”, even though it was created almost one century after the death of Alfred Nobel, who did not want to include  Economics in his Prizes’ list. The Nobel Prize for Physics seems to go in the same direction. Finally, we also note that, concerning the exoplanets discovery, Geoffrey Marcy was a natural candidate to share the Prize with Major and Queloz. The reason why he was excluded is not at all clear: perhaps because he was accused of sexual harassment, a fact that should not bear any relevance according to the original statue of the Nobel Prize, which it is only concerned with the importance of a discovery.

A discussion on whether researchers that contribute outstanding discoveries, but who also are morally or legally reprobated, should deserve the Prize has simply been avoided this time, by saturating the maximum number of awarded people (three, according to the 4th point of the statutes of the Nobel Prize) once that Peebles was included in the list. Whatever the rationale is, we must conclude that social, political and ideological pressures certainly played a major role also in the assignment of the Nobel Prize in Physics, the “Queen” of science.

The Nobel Prize has lost its original character over time and has become more of a social recognition rather than a pure scientific award. Something like singing “For He’s a Jolly Good Fellow”…