Subjecting mice to repeated emotional stress, the kind we experience in everyday life, may contribute to the accumulation of neurofibrillary tangles, one of the hallmarks of Alzheimer’s disease, report researchers at the Salk Institute for Biological Studies. While aging is still the greatest risk factor for Alzheimer’s disease, a number of studies have pointed to stress as a contributing factor. 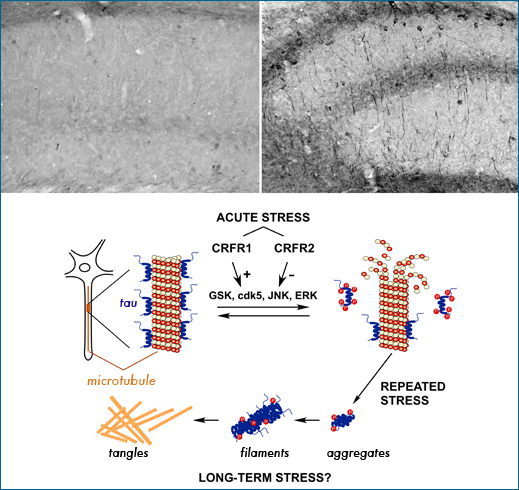 Top left: In unstressed animals the hippocampus, which is involved in the formation of memories and learning, is free of phosphorylated tau. Top right: Subjecting mice to low-level chronic emotional stress--the kind we experience in everyday life--leads to widespread tau phosphorylation, a key step in the formation of neurofibrillary tangles (black streaks), one of the hallmarks of Alzheimer's disease. Bottom: While acute stress effects are reversible, repeated stress leads to cumulative increases in phosphorylated tau, a portion of which is sequestered in an insoluble, and potentially pathogenic, form. Image courtesy of Dr. Paul E. Sawchenko and Dr. Robert A. Rissman, Salk Institute for Biological Studies

“A long-term study of about 800 members of religious orders had found that the people who were most prone to stress were twice as likely to develop Alzheimer’s disease, but the nature of the link between the two has been elusive,” says Paul E. Sawchenko, Ph.D., a professor in the Neuronal Structure and Function Laboratory, who led a phalanx of Salk researchers contributing to the current study.

The group’s findings, detailed in this week’s Journal of Neuroscience, suggest that the brain-damaging effects of negative emotions are relayed through the two known corticotropin-releasing factor receptors, CRFR1 and CRFR2, which are part of a central switchboard that mediates the body’s responses to stress and stress-related disorders.

Alzheimer’s disease is defined by the accumulation of amyloid plaques and neurofibrillary tangles. While plaques accumulate outside of brain cells, tangles litter the inside of neurons. They consist of a modified form of the tau protein, which—in its unmodified form—helps to stabilize the intracellular network of microtubules. In Alzheimer's disease, as well as various other neurodegenerative conditions, phosphate groups are attached to tau. As a result, tau looses its grip on the microtubules, and starts to collapse into insoluble protein fibers, which ultimately cause cell death.

Previous studies had shown that extreme physiological stress, such as plunging mice into ice water or starving them for three days, can induce tau phosphorylation. “But what we wanted to know was whether exposure to milder stress, of the kind we experience in our daily lives, can induce tau phosphorylation,” explains senior research associate and first author Robert A. Rissman, Ph.D.

Restraining mice for half an hour, a situation that replicates the body’s reaction to low-level anxiety, fear or social stress, resulted only in a transient phosphorylation of tau. However, when Rissman simulated chronic stress by repeating the procedure every day for two weeks, the modification lasted long enough to let tau molecules tumble off the cytoskeleton and pile up in insoluble heaps of protein.

The first thing you consider when you think about stress-induced changes in the brain is glucocorticoids because they are such pervasive mediators of stress responses, says Rissman. But even without available glucocorticoids, tau was still modified under stressful conditions and he had to look elsewhere. “The next obvious candidate was the CRF system, which has been broadly implicated in many kinds of stress adaptation,” he says.

So, Rissman and Sawchenko teamed up with their Salk colleagues Kuo-Fen Lee, Ph.D., and Wylie W. Vale, Ph.D., both professors in the Clayton Foundation Laboratories for Peptide Biology. Vale, Lee and their colleagues have been instrumental in piecing together a global view of how the corticotropin-releasing family of molecules regulate our bodies’ responses to physiological and emotional stress.

Lee made available his mice that had been genetically engineered to lack either CRFR1 or CRFR2. “And sure enough, the CRF receptors turn out to be integrally and differentially involved,” says Sawchenko. In the absence of CRFR1, stress-induced tau phosphorylation was abrogated, while in mice missing CRFR2 the effect was amplified. Pharmacological studies with small molecule inhibitors replicated the effect.

Currently, several companies are actively pursuing small molecule drugs that bind CRF receptors and a few of them are already in stage 2 clinical trials for depression and other mood disorders. “We may have discovered another application. Such drugs could have a prophylactic effect or delay the progression of Alzheimer’s disease,” Sawchenko says.