The first truly semi-aquatic dinosaur, Spinosaurus aegyptiacus, has been announced.

New fossils of the massive Cretaceous-era predator reveal it adapted to life in the water some 95 million years ago, providing the most compelling evidence to date of a dinosaur able to live and hunt in an aquatic environment.

The fossils also indicate that Spinosaurus was the largest known predatory dinosaur to roam the Earth, measuring more than 9 feet longer than the world's largest Tyrannosaurus rex specimen.

An international research team  found that Spinosaurus developed a variety of previously unknown aquatic adaptations. The researchers came to their conclusions after analyzing new fossils uncovered in the Moroccan Sahara and a partial Spinosaurus skull and other remains housed in museum collections around the world as well as historical records and images from the first reported Spinosaurus discovery in Egypt more than 100 years ago. 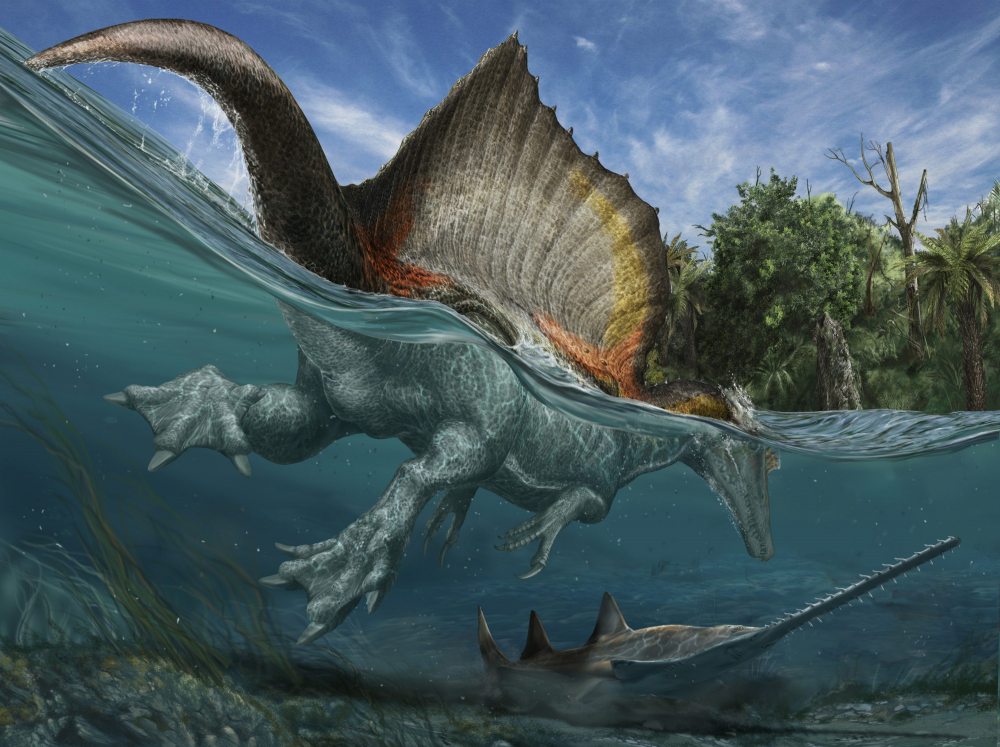 The aquatic adaptations of Spinosaurus differ significantly from earlier members of the spinosaurid family that lived on land but were known to eat fish. These adaptations include:

More than a century ago, German paleontologist Ernst Freiherr Stromer von Reichenbach first discovered evidence of Spinosaurus in the Egyptian Sahara. Sadly, all of Stromer's fossils were destroyed during the April 1944 Allied bombing of Munich, Germany. The authors were able to track down Stromer's surviving notes, sketches and photos in archives and at the Stromer family castle in Bavaria to supplement Stromer's surviving publications.

The new Spinosaurus fossils were discovered in the Moroccan Sahara along desert cliffs known as the Kem Kem beds. This area was once a large river system, stretching from present-day Morocco to Egypt. At the time, a variety of aquatic life populated the system, including large sharks, coelacanths, lungfish and crocodile-like creatures, along with giant flying reptiles and predatory dinosaurs.

The most important of the new fossils, a partial skeleton uncovered by a local fossil hunter, was spirited out of the country. As a result, critical information about the context of the find was seemingly lost, and locating the local fossil hunter in Morocco was nearly impossible.

To unlock the mysteries of Spinosaurus, the team created a digital model of the skeleton with funding provided by the National Geographic Society. The researchers CT scanned all of the new fossils, which will be repatriated to Morocco, complementing them with digital recreations of Stromer's specimens. Missing bones were modeled based on known elements of related dinosaurs. "

The researchers then used the digital model to create an anatomically precise, life-size 3-D replica of the Spinosaurus skeleton. After it was mounted, the researchers measured Spinosaurus from head to tail, confirming their calculation that the new skeleton was longer than the largest documented Tyrannosaurus by more than 9 feet.

The life-size skeletal replica will be the centerpiece of a new exhibition at the National Geographic Museum in Washington, D.C., titled "Spinosaurus: Lost Giant of the Cretaceous", which runs from Sept. 12, 2014, to April 12, 2015.