Tommaso Dorigo
When I started a career in particle physics, joining the CDF experiment at the Fermilab Tevatron proton-antiproton collider about two decades ago, the search for a particle decay signal into hadronic jets was not something one would undertake lightly at a hadron collider: jets are omnipresent when you collide hadrons at high energy, so they constitute a irreducible background. Just as a detective looking for a blonde thief with swedish accent in Sweden, you would be close to clueless.

Yet, jet-decaying resonances were at the time (the early nineties) a very interesting, intriguing topic. The LEP electron-positron collider had just pocketed millions of clean decays of Z bosons to jet pairs -there is no jet background at lepton colliders!- with which they were extracting exquisite measurements of Standard Model parameters almost by the week;  hadron-collider experimentalists were drooling and envious at the sight of such a clean signal. So vector bosons needed to be looked for even in our harsh hadronic environment.

In truth, the extraction of a combined signal of W->jj and Z->jj decays had been obtained already five years earlier by physicists at the CERN SppS synchrotron - a hadron collider! But there, they had used a special trigger collecting jets of very low energy: a background-enriched sample, so to speak, which helped them to model the background shape in a way that the Tevatron could not afford to do (collecting all the "dijet garbage" at low energy for the specific purpose of observing W and Z bosons is something one could only do by twisting many people's arms - there were much better ways to use the 100-Hz data-saving frequency capability of the Tevatron experiments!). And further, the higher centre-of-mass energy of the Tevatron versus the SppS (1800 GeV versus 630 GeV) was  a disadvantage for once, with the ratio of electroweak signal production to quantum chromodynamical (QCD) background four times lower, due to the peculiarities of the parton distribution functions at medium and high x in the proton.

In CDF the technology for overcoming the problem of detecting hadronic decays was developed in the nineties: a secondary-vertex b-tagging. B-quark-originated jets are more democratically produced by electroweak interactions than QCD, so electroweak processes can be selected by insisting that some of the jets are b-tagged.

The proof of principle that b-tagging would allow fully-hadronic signals to emerge in hadron collisions was given in 1996 by my research group in Padova, when we produced the observation of top pair production in events collected by CDF which featured just hadronic jets in the final state: we are talking here of six jets, not two, but still the issue was the same. Quantum chromodynamical processes would drown the faint top pair decay signal, which gave six jets when both W bosons emitted in the t->Wb decays in turn produced two jets; but the two b-jets directly originated from the top decays could be used to "tag" the events. The blonde thief would be spotted by selecting men carrying two large suitcases full of cash. 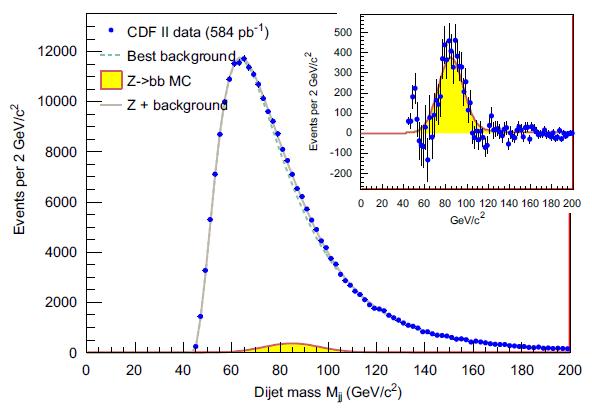 In 1998 I completed my PhD thesis by showing that the same technique -double b-quark tagging- allowed to spot Z->bb decays. Z bosons decay to b-quark pairs about 15% of the time, so requiring that both jets in an event are b-tagged reduced quite significantly the data sample; but the remaining events were much richer in signal in a relative sense. The figure on the right shows the kind of signal we extracted in Run II (J.Donini is the main author of the relevant publication), with a much larger dataset than the one I used for my PhD. The small signal (in yellow) is only visible with a subtraction technique (see inset), but it is definitely there. Its detection revived hopes that the Higgs boson decay could be detectable at the Tevatron one day...

Nowadays background-estimation techniques have improved significantly, and b-quark tagging allows the extraction of faint diboson signals. And the DZERO collaboration just did so by looking for the WZ/ZZ signature in events where one Z decays to b-anti b pairs, and the other boson decays to leptons: W->eν, or Z->ee, Z->μμ, and Z->νν decays are considered. Yes, even neutrino pairs are good: the Z->νν decay grants a very clean signature with the large energy imbalance in the transverse plane produced by the escape of the undetectable neutrinos. 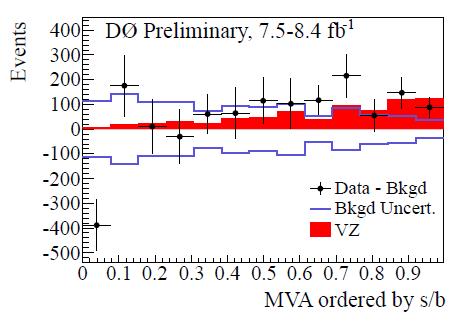 The signal is extracted by DZERO using multi-variate analyses that optimize the signal to background discrimination, based on several kinematic variables. One thus ends up sizing up the signal not by fitting directly the mass distribution as in the old days, but rather by fitting the MVA output -a number from 0 to 1 which is larger for signal-like events than for background-looking ones. The distribution of the data, background-subtracted, is shown on the MVA output graph on above. You can see that there is an excess of data over predicted backgrounds (a departure from the central line at zero) which looks like the VZ signal (in red). 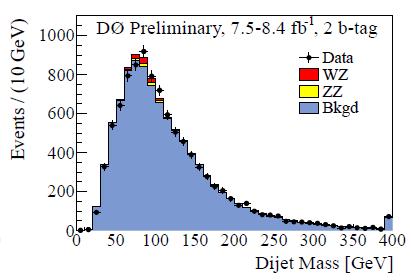 DZERO also shows the mass distributions, of course: the mass of the pair of b-jets remains the variable everybody wants to see, to get convinced that what is seen is a true signal and not a fluctuation due to vagaries in the MVA application to real data (the MVA is trained on Monte Carlo samples, which are well-tuned but are still just simulations). On the right you can see the data for the double-b-tagged dataset (DZERO also analyzes separately events with only one b-tag, but the signal is even smaller there). Indeed, the red signal appears quite small there, and yet a statistical analysis proves it is there; at least, DZERO may claim a strong evidence for it. 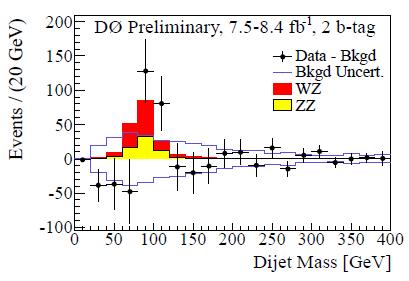 And on the left here you can see the VZ signal, in red, in a background-subtracted mass distribution (the red histogram is from WZ decays, and the yellow one is the ZZ contribution; the two are not distinguished here by the analysis technique). Quite nice, and a demonstration of the technique one can apply to detect a Higgs boson. Of course: the Higgs boson can in fact be produced in proton-antiproton collisions by the very same mechanism, in association with a W or Z. So instead of a Z->bb, one gets a H->bb; the signal then peaks at 125 GeV (if the Higgs does have that mass), and is some ten times smaller.

So can we see some Higgs decays in the DZERO plot ? I do not know how stringent is the MVA selection of VZ candidates in this analysis, so I can't really tell how much Higgs signal may have leaked out in this selection; but it does seem as if there is some excess in the right ballpark... Good news for the LHC ? Well, if we were at a bar we could certainly say so, especially after a couple of beers!