Steve Schuler
In my previous article, you learned how to use the 555 test circuit as a cable tester. It can also be used to test whether different materials conduct or don’t conduct electricity such as plastic, glass, cloth, wood, a coin from your pocket, a house key, aluminum foil, or any number of materials from around the house. You can also use it to see how well you conduct electricity to demonstrate one of the measurements, skin conductance, of a polygraph, or lie detector.

In the demonstration video I touch the snaps together to get a base line tone. Next I hold the snaps on the red and black Jumper Wires between my fingertips to demonstrate that your skin does indeed conduct electricity. The variation in the tone you hear is me squeezing the snaps and relaxing thus increasing the surface area between my skin and the snaps, and when I relax reducing the surface area. In the final part of the demonstration I dip my fingers in tap water (contained in the 50ml beaker) and hold the snaps to demonstrate how moisture on your skin increases conductivity (or reduces resistivity).

The idea is when your are lying you are afraid of being caught and this causes a physiological response (skin conductance response). Your sweat glands increase their secretion increasing the moisture of your skin which is detected by the lie detector (sweat contains electrolytes).

Here’s an interesting story I came across the other day and it does seem that sometimes truth is stranger than fiction. I'm not sure if the story is true but several newspapers and websites are covering it so, maybe it really is a thing, but I’m still withholding provisional assent just in case it is a joke.

According to the story:

“Federal agents, as part of an Obama administration crackdown on security violators and leakers, have launched a criminal investigation of instructors who claim they can teach job applicants how to pass lie-detector tests.

The criminal inquiry, which has not been acknowledged publicly, is aimed at discouraging criminals and spies from infiltrating the U.S. government by using so-called polygraph-beating techniques, which are said to include controlled breathing, muscle tensing, tongue biting and mental arithmetic.”

My first impression, and probably yours too, was that a just-out-of-law-school-just-passed-the-bar-hasn't-yet-set-foot-in-a-courtroom public defender could get this case thrown out of court on account of the First Amendment. The story says, however, that, “instructors may be prosecuted if they know their students plan to lie about crimes during federal polygraphs.”

This, to me, is where the story really gets interesting. I, of course, defer to practitioners of Law and by all means do feel free to post your professional opinion regarding this matter in the comments section below. I think we can set aside the case of Mr. Chad Dixon (a Hoosier, by the way, but I haven’t seen any reference in the Indianapolis Star regarding his case as of this writing) who plead guilty to “obstructing an agency proceeding and wire fraud.” But how do the Feds plan on prosecuting Mr. Williams? 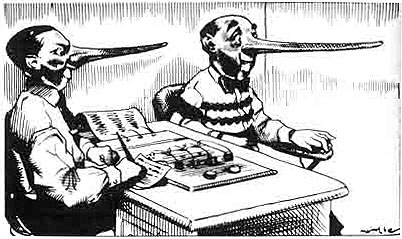 Prosecution could bring in expert witnesses from the American Polygraph Association, psychologists, etc. but their testimony will not stand up to scrutiny because, “polygraph testing now rests on weak scientific underpinnings despite nearly a century of study…and much of the available evidence for judging its validity lacks scientific rigor,” according to NAS.

Though there are some additional sensors that can be connected to the machine, a polygraph usually measures four metrics: respiration, pulse, blood pressure, and skin conductivity. Tubes of corrugated rubber are strapped to your chest to measure your breathing, a blood pressure cuff is wrapped around your arm to measure blood pressure and heart rate, and electrodes are strapped to your fingers to measure skin conductivity. Polygraphers believe that they can detect deception, by reading the squiggly lines that measure your physiological changes (respiration, pulse, blood pressure, and skin conductivity) when you are lying. You’re more likely, however, to be stressed about being electrocuted by all the doodads attached your body than you are being caught telling a lie (which might be read by the polygrapher that you’re lying when you’re actually telling the truth--a false positive)

A polygraph machine does not give the polygrapher magical powers to tell when you’re lying. It is nothing more than the power of suggestion. That is, people are more likely to confess to some sort of wrongdoing based on the false belief that the polygrapher can detect whether or not a person is lying by looking a the squiggly lines the machine produces when, in fact, he or she cannot. There is absolutely no reason to be intimidated by a polygrapher. Think of it this way: it takes twice as long to pass Barber College than the nine and a half weeks it takes to become a certified polygrapher. You’re not intimidated by the person who does your hair are you?