It’s widely understood that a key reason why life developed on Earth is because of water.  A common definition of a habitable environment is one in which plenty of liquid water is available to sustain life.  In short, we can’t live without water.

But there’s more to it than just the presence of water.  We want our water to be clean and healthy so as to avoid risks to people and the environment from unwanted contaminants.  With that goal in mind, numerous environmental monitoring studies have been conducted that look for various contaminants in water, and generally find some at trace levels.

For practical reasons, most monitoring studies target only a limited number of substances, meaning we only know what we looked for – not everything that might be present.  Although these studies provide quite a bit of data, that leaves a gap in our understanding of the potential health and environmental impacts of real-life chemical mixtures in water.

As a step towards addressing these limitations, the U.S. Geological Survey (USGS) and the U.S. Environmental Protection Agency (EPA) recently conducted an in-depth study to provide more insight into the complex mixtures of contaminants present in U.S. streams.

Based on what we know from previous studies it isn’t a surprise that contaminants were found at low levels, but some of the findings may still be an eye-opener.  For example, of the 12 most frequently detected contaminants, all but three are synthetic substances that were designed to be biologically active as pesticides or human drugs. 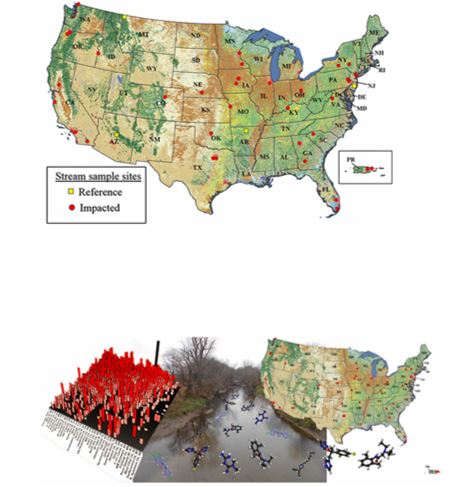 Perhaps counterintuitively, contaminants that we frequently hear about may not be commonly found in water.  For example, bisphenol A (BPA), which is a synthetic chemical that is primarily used to make polycarbonate plastic and epoxy resins, has been a popular topic in the media for years.

Yet BPA was found only at very low levels, when detected at all, in less than 40% of the streams.  Even at the highest level detected, which is well below 1 part per billion, an adult would have to drink over 21,000 liters of water (over 5,600 gallons) per day just to reach the safe intake limit for BPA set by EPA.  Obviously that’s not even remotely possible, indicating that the amounts of BPA found are not likely to be a human health concern.

But this result too may be counterintuitive.  The researchers reported that nearly all of the observed estrogenic activity could be attributed to naturally produced hormones, in particular estrone, which is known to be a potent estrogen and is one of the top 12 most frequently detected contaminants.

Conversely, even though BPA is known to be weakly estrogenic, BPA contributed well under 1% of the observed estrogenic activity.  Again, these results indicate that BPA in water is not likely to be a human health concern.

Why Did USGS and EPA Do The Study And What Did They Do?

As noted by USGS and EPA, “[c]hemical-mixture exposures in streams are global concerns.”  For that reason, hundreds of studies have been conducted by scientists worldwide to measure levels of various contaminants in all types of water bodies (e.g., rivers, streams, lakes, oceans) as well as in potential sources of contaminants (e.g., wastewater treatment plants).

These studies document the presence of a wide variety of contaminants in water, generally at very low levels.  Both natural (e.g., human and animal hormones, phytoestrogens) and synthetic (e.g., pharmaceuticals, pesticides, industrial chemicals) substances are frequently found.  For practical reasons though, most studies typically target only a small number of substances.

While the resulting data is useful, it does not provide a complete picture.  More complete knowledge is needed to understand the full scope of contaminants in water, the potential human and environmental health risks of these complex mixtures, and to set priorities for the most appropriate actions to mitigate risks.

What Did They Find?

The type of contaminants found is particularly interesting.  The twelve most frequently detected contaminants, found in 66-84% of the streams, are all of anthropogenic origin, meaning they are the result of human activity.

Of these 12, all but three are synthetic substances that were designed to be biologically active as pesticides or human drugs.  Perhaps most strikingly, one of the remaining three is estrone, which is a potent estrogenic hormone that is naturally produced in the human body.

Overall, 57% of the 406 substances detected are synthetic substances designed to be bioactive (e.g., pharmaceuticals, biocides).  But bioactivity is not the exclusive realm of synthetic substances.  Along with estrone, naturally occurring phytoestrogens, which are estrogenic compounds produced by plants, were also commonly detected.

What Does It Mean?

The frequent detection of so many substances, in particular biologically active substances, may sound alarming.  But low levels of a contaminant are not necessarily a concern and frequency of detection is somewhat of an artefact of the highly sensitive analytical methods that are available today.  It’s not much of an exaggeration to say that you will find almost everything if your analytical method is sensitive enough.

Other factors beyond the level of a contaminant are critically important, in particular biological potency.  The case of BPA, which is well known to be weakly estrogenic, is a good example.  As reported by USGS and EPA, the estrogenic potency of BPA is about 100,000 times less than the potency of estrone, which is a prototypical estrogen and was found at a higher frequency in this study.

As a result of its low potency, a typical adult weighing 70 kilograms (154 pounds) would need to drink 21,472 liters (5,672 gallons) of water per day containing the maximum level of BPA detected (163 nanograms/L) just to reach the safe intake level for BPA set by EPA.  That’s especially not likely to happen since the maximum level was found in water from the Chicago Sanitary and Ship Canal, which you’re not likely to drink at all.

To provide more context for the health and environmental significance of the contaminants, USGS and EPA went a step further to measure biological activity in four standard assays.  The assays, which measure estrogenic, androgenic and glucocorticoid activity, do not directly evaluate health or environmental risks, but provide information on the relative potential for risks.  Importantly, the assays were run on the whole water samples, which essentially evaluates the actual chemical mixtures to which people or wildlife would be exposed from those water samples.

But again, potency matters.  As reported by USGS and EPA, estrogens naturally produced by the human body (primarily estrone) could explain nearly all of the observed estrogenic activity.  Conversely, less than 1% of the estrogenic activity could be explained by the presence of all other estrogenic compounds, only one of which is BPA.  Considering the low estrogenic potency of BPA, only a fraction of that 1% can be attributed to BPA.

A question not specifically addressed in the new study is where do the contaminants come from?  Although not within the scope of the research, anecdotal evidence reported by USGS and EPA indicates that the samples with highest biological activity were collected downstream of wastewater treatment plants that contributed a significant amount of the streamflow.  That evidence is consistent with other studies that report numerous contaminants in wastewater.

Once again, BPA is an informative example.  Although BPA has been commonly found in wastewater, many studies have also shown that BPA is readily biodegraded in wastewater treatment plants, which substantially reduces the amount of BPA released to the environment from treatment plants.  Some of those same studies also show that many other contaminants are not efficiently degraded in today’s treatment processes.

The new study suggests that more research is needed to better understand what contaminants are in water and whether those complex mixtures pose any health risks.  More importantly, the new data should help to focus further research and, eventually, help to prioritize actions to mitigate risks.