Running Sounds May Contain Clues To Injury Prevention
By The Conversation | December 6th 2016 03:31 AM | Print | E-mail

The number of Australians who run for exercise has doubled since the mid-2000s. Preventing and managing injuries are common concerns, and can present an ongoing health burden and high cost if not addressed appropriately.

But what if listening to the sound of running could help prevent injuries?

We recently conducted the first study to relate running technique with the sound of feet hitting the ground. Listening could prove a simple and effective feedback mechanism for runners, coaches and clinicians to understand how runners land their feet and the potential for certain injuries.

Running is most commonly associated with two areas of injury: the knee and the ankle. These two locations account for around two thirds of running related lower limb injuries.

The location and type of injury a runner is most at risk of enduring appears to be linked with their foot strike technique, that is, which part of their foot hits the ground first as they stride. A rearfoot strike is the most common running technique, and involves initial ground contact made by the heel. This style of running is associated with knee injuries. A forefoot strike, where the initial contact is made by the ball of the foot, is associated with injuries to the ankle (such as Achilles tendonitis).

Knowing how you run is not straight-forward. A recent study suggests that more than 50% of people are unable to correctly identify their own running technique.

We investigated whether the sounds of foot strike relate to foot strike technique, and if these are linked to impact forces on the body.

A highly sensitive microphone was used to measure the sound of the foot contacting the ground.

We used an 18 camera three dimensional motion analysis system to capture running technique. The system was similar to that used to make the movie Avatar: it creates a stick figure of the person running, then accurately calculates the angles of the ankle, knee and hip joints. Force plates were also used to measure how much impact the runners exerted on the ground. This is illustrated by the red arrow which extends upwards into the body as the foot lands on the grey plate in the video below.


Force is transferred from the foot to the body during running.

Changing from a noisy to a quiet runner

We found that when runners were asked to run “quietly”, the sound of their foot impacting the ground was reduced, which was not surprising. However, the maximum forces exerted on the ground, and how quickly these forces were absorbed by the runners (loading rate), were also reduced in quiet running. Runners may be at greater risk of injuries such as shin splints if forces are absorbed too quickly. It is therefore possible that running “quietly” may reduce your risk of shin splints.

Interestingly, while individual runners were able to reduce their forces by running quietly, across all data there was no overall link between the sound of running and peak forces or force absorption rate. This means that “loud” runners are not necessarily at greater risk of injury than “quiet” runners. However, it does suggest that at an individual level and regardless of your running style, if you aim to lower the sound of your running you may reduce your risk of injury. 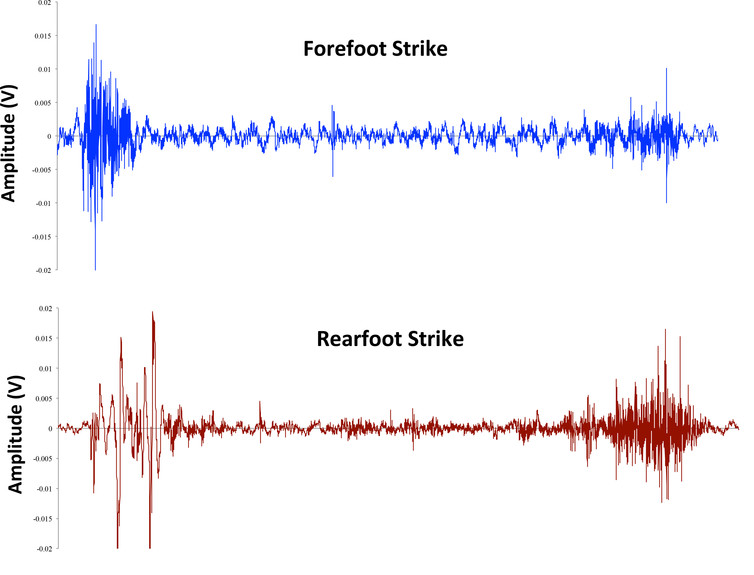 How can I run to avoid injury?

There are two ways this study may prove useful to the amateur runner. Firstly, runners wishing to reduce the forces going through their joints may be able to achieve this simply by reducing the sound of their foot strike. Secondly, runners who have been professionally advised to change their running foot strike technique may be able to use the sound of their landing as a feedback mechanism.

However, it must be noted that previous research has not shown any mechanical or performance advantage of one foot strike technique over the other. There are also no apparent differences in the rates of occurrence of injury between the two techniques: it is purely the injury location that changes due to varied force distribution.

Ours is the first research to indicate a relationship between sound, running technique and forces. While it has answered some questions, it has raised many more. For example, we’re interested in whether the sound of running varies between different footwear, and what the effect of speed, gender and running surface are on the sound of running. Further research is needed to answer these questions.