Robert H Olley
For some time now in Britain, our “great and good” have been belabouring the more conservative part of our population [1] with accusations of Islamophobia and Homophobia.  The implication of those two epithets is that they are some kind of medical or — by extension — moral pathology.  I will attempt in this short blog to raise the subject of what I consider to be some errors of our “great and good.”

Firstly, Islamophobia.  I am not going to talk about Islam — here I intend to strictly follow Steven J. Gould and treat religion and science as “separate magisteria”.  But this “Islamophobia” is a phenomenon that has arisen in the wake of attacks such as 9/11.  Now such operations are, one would think, primarily designed to create Fear and Terror, or to those who know their Greek, Phobos and Deimos.

But what, one wonders, is the rationale of an intelligentsia that turns on its own native population instead of the enemy outside? Now for homophobia.  In his recent article A New Scout Code: Time For An Update, Beaver!, Greg Critser gave “Bigoted leadership” as a possible reason for the banning of a certain gay scoutmaster.  Now the word bigot is, to me, like a red rag to a Torosaurus, if you will pardon the etymological blooper [2].  Coming from Ireland as I do, this touches a raw nerve.  It started to loom large on my radar in the BBC coverage of the sectarian troubles in Northern Ireland.  The BBC, alas, tended to over-apply it to the side they did not like, namely the Protestants.  We won’t go there, but this is what kicked of this yet another of Robert’s rants or rambles.

Again, I have issues, two this time, with the word phobia.  One is, that applying it to what is sometimes vicious hatred is diluting the moral force of what Chesterton has described as a mortal sin[3], as if those who indulged it in were not somehow responsible for their actions.

Second, it is used as a slogan (an old Irish word meaning a war cry) by politically motivated people.  There is, in this country, a kind of soft intellectual terrorism against those who dislike what might be referred to as ‘gay culture’.  Recently, Hong Kong has cancelled the exhibition of a statue by Antony Gormley to be erected on top of a building.  The reason given is that it would disturb people following the suicide of a bank worker who jumped to his death off the top of a building. 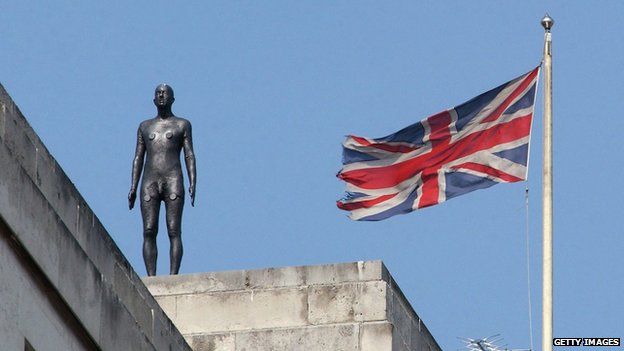 And it seems even more bizarre that such a statue by that man has been displayed in Winchester Cathedral.  Most theologically unsound — the Anglican marriage service contains the words “with my body I thee worship”, but from a quotation in Mr Gormley’s Wikipedia biography it seems that with his body he worships himself.  (And it seems he is not gay — he has been married to the same wife since 1980.)  And one “little boy” thought — during the recent floods, we saw on television the same statue up to its knees in water.  It really looked as if he had made a big puddle indeed.

Also in this are militant secularists.  I would guess that most of my colleagues in science are non-believers.  There is even one — my favourite drinking companion (for afternoon tea, since I am off alcohol for medical reasons) — whom I would choose as a model for the sign of an imaginary pub “The Jolly Atheist”.  But I am not talking of people such as he.  In GB we do have a small but noisy group of activists who are no doubt delighted that Roman Catholic adoption agencies have been forced by law to close because they will not place children with same-sex couples for adoption.  (Could such a thing happen in America?)

So what is the connection between Islamophobia and homophobia?  At first sight, there would appear to be none.  However the slogans are much favoured by anticonservative politicians in Britain, especially two very prominent in the politics of London, where there has arisen

A strange coalition, first forged by Ken Livingstone, [which] somehow knits together gay-rights activists with Islamist fanatics who want homosexuals thrown off cliffs, the more right-on sort of cosmopolitan entrepreneur with the most bloody-minded public-sector trade unionist.[4]

I am writing to a largely American audience.  Americans may seem, to us Brits, to take things to extremes.  But over this side, we are subject to some very restrictive libel laws and antidiscrimination laws.  (I am not against antidiscrimination laws as such, but many of our judges seem to be short of a hemisphere, and those who formulate our laws short of two.)  In your country, I have the impression, you have the freedom to open your mouth and make a fool of yourself, but in this country you may find yourself subject to a visit from the Plods (after Mr Plod the Policeman in the Noddy books.)

But most painfully, what is it that has caused our intelligentsia to turn on their own people, so that we have become like a snake swallowing its own tail (or maybe, with its head disappearing up the other orifice)?   So is Britain on the way out?  For all the best efforts of our “great and good” to alienate me, I do not want to give up on my country.  Again from G.K.Chesterton:

The worst jingoes do not love England, but a theory of England. If we love England for being an empire, we may overrate the success with which we rule the Hindoos.  But if we love it only for being a nation, we can face all events: for it would be a nation even if the Hindoos ruled us.

For now, I will leave it there, and let other people have their say.  Otherwise I myself will be in danger of becoming like that snake with its head stuck you-know-where.  But in case you simply dismiss me as a some sort of has-been before I’ve been and gone, may I refer you The Human Being and the Dinosaur by that most excellent of humorists, the American James Thurber.  The whole thing is worth reading, but here is its closing paragraph:

Man, as it turned out, was right. The dinosaur and his ilk and his kith and his kin died not long after, still in lower case, but with a curious smile of satisfaction, or something of the sort, on their ephemeral faces.

[1] In the USA they might be somewhat disparagingly referred to as “rednecks”, but our weak and intermittent sunshine is not strong enough to turn people’s necks red.

[2] according to Wikipedia, «The name Torosaurus is frequently translated as "bull lizard" from the Latin noun taurus or Spanish toro but much more likely is derived from the Greek verb τορέω (toreo, "to pierce, perforate").  The allusion is to the fenestrae or ("window-like") holes in the elongated frill, which have traditionally served to distinguish it from the solid frill of Triceratops. Much of the confusion over etymology of the name results from the fact that Marsh never explicitly explained it in his papers.»

[3] “For the English are a moody and a fickle people; contrasted in that with the Irish, who carry constancy to the point of a mortal sin; the sin of mere hatred.” http://www.cse.dmu.ac.uk/~mward/gkc/books/Shaw.html

[4] Local elections: The capital fails to see the heartache and pain beyond
Beamlines
More Articles All Articles
About