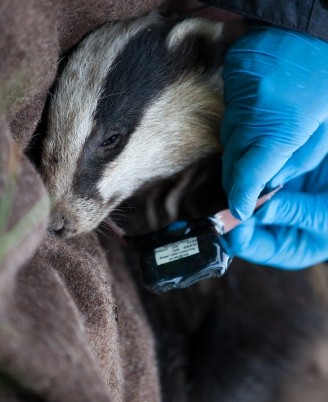 In recent years in Britain, we have heard much about bovine tuberculosis, which affects a wide variety of mammalian species, including mustelids, including the European badger Meles meles. There has been much argument over whether badgers should be culled to control the spread of the disease among cattle: indeed, badger culling in the United Kingdom has been a fraught and controversial subject.

Now recently it has been shown that close contact between badgers and cattle may not be responsible for the transmission of bovine tuberculosis: according to a new paper: badgers keep their distance from cattle, and bovine TB is probably spread between the two species in the environment.

Scientists at Imperial College and the Zoological Society of London (ZSL) attached GPS collars to hundreds of badgers and cows and monitored how close they came to each other at 20 farms in Devon and Cornwall. The study, published in the journal Ecology Letters, found that while badgers do favour cattle pasture as a habitat, they typically avoid cattle themselves and rarely get close enough to transmit infection directly. Since badgers rarely come into contact with cows, which means disease must be spread through bodily fluids on the ground or in feeding troughs.

The team used Global Positioning System (GPS) collars and proximity-sensing contact-collars to explore how closely badgers and cattle came into contact across 20 farms in Cornwall. In total, collared cattle spent the equivalent of eight years in the home ranges of contact-collared badgers and the equivalent of nearly 15 years in the home ranges of GPS-collared badgers – yet the two species were never found in close proximity. Instead, simultaneous GPS-tracking indicated that badgers preferred to be at least 50 metres away from cattle.  Even more striking, over a course of 18 months the badgers did not come within 16 feet (five metres) of each other. It is thought the animals would need to be within five feet for disease to be spread.

This suggests that transmission of Mycobacterium bovis – the bacterium responsible for bovine tuberculosis – is likely to occur more frequently from contamination of the two species’ shared environment, rather than through direct badger-cattle contact.

The researchers concluded that TB was being passed between the two populations through pasture contamination, which also meant that infected cows could be passing it between themselves, and farms could remain disease hotspots even when animals have been culled.

Professor Rosie Woodroffe, Senior Research Fellow at ZSL and a visiting professor at the School of Public Health at Imperial said:

“It has been known for a long time that badgers can transmit TB to cattle – but without knowing how they do it, it is hard to offer farmers advice on the most promising ways to protect their herds. Our study provides the strongest evidence yet that transmission is happening through the environment, helping to explain why controlling TB is so difficult. This work marks the first step towards identifying more effective ways to reduce transmission between badgers and cattle, and also potentially better ways to manage cattle-to-cattle transmission as well.”

“We’ve also got some pretty strong evidence that cattle give TB to badgers. This helps to explain why TB is so hard to control. It can survive a long time in the environment.

“This study raises the possibility that some elements of cattle-to-cattle transmission might happen through the environment. TB isn’t managed in cattle that way. If a herd gets TB, they are kept in isolation but the pasture that they have grazed on, their dung is not treated as an infectious substance.”

This research paves the way for novel approaches to managing this controversial disease.

The team have said that vaccinating badgers may be a better way to tackle bovine TB than culling.  I am much more likely to listen to scientists than celebrities over a matter such as this.  But perhaps there may be a cheaper and easier solution.

In North America, there seems to have been considerable success in protecting cattle and sheep by the use of Guard llamas to keep coyotes at bay.  But such solutions do not always work as predicted.  According to a letter to the Times, June 13, 2014:

Sir,
Matthew Parris’s llamas have caused badgers to move away from his patch (June 11, 2014). My alpacas have also scared badgers from their field but in the wrong direction — the badgers have dug under the fence and taken up residence in my garden. Not what I want.

This article is largely cobbled together from two press releases:

Badgers keep away from cows and TB is not spread through contact, say scientists by Sarah Knapton, Telegraph Science Editor

Picture at top shows a sedated badger being fitted with a GPS collar.