Catarina Amorim
In times of easy access to the Internet and cheap travel, we consider ourselves part of a global society, but how connected this really makes us will surprise many of us.

A Portuguese research group has found that social networks are allowing us to influence people everywhere, and not only those that we know, but also people that we never or will ever meet, which is nothing short of extraordinary.

Flávio Pinheiro, Jorge Pacheco and colleagues were studying the recently proposed “3-degrees of influence” rule - which suggests that we can influence not only the behavior of our friends, but also of their friends and their friends’ friends (3 degrees of influence) – and were astonished with what they found. They discovered that rather than be an exception, the rule was a “universal behavior of social networks, which is independent of the type of information, on how it spreads, and even of the type of social network that inter-connects individuals” as Pacheco explains.

Also surprising was to discover that the exception to the rule were networks with sparser or/and closer connections (meaning with individuals with either fewer contacts, and/or friends that are also friends of each other), in which case peer influence could reach even further (but never much more then 3).

The study - which will be published next week in Physical Review Letters and comes from the ATP group of the Universidade do Minho, Instituto Superior Técnico and Universidade de Aveiro - have implications, not only for the understanding of behaviors but also for their potential “manipulation”, and can revolutionize fields as diverse as health education, warfare and, of course, marketing.

The idea of a society much more connected than we ever believed to be possible was introduced to the larger public by the Kevin Bacon’s “6-degrees of separation” ,  the game that made famous a social theory that claims that anyone in the world is 6 or fewer contacts/people away from everyone else.

A less known, but as remarkable theory, is the “3-degrees of influence” rule, which says that our behaviour can influence others in the same social network up to 3 degrees of separation (so basically have an impact on friends of friends’ friends, even without us knowing them). 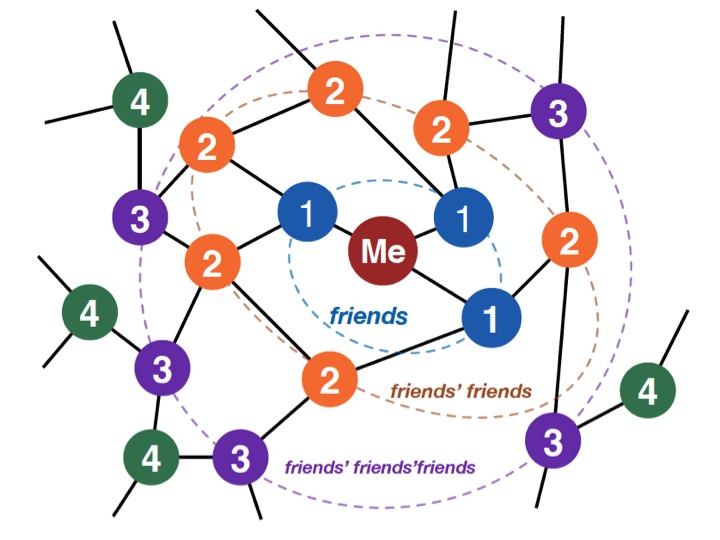 This rule/effect was first identified in the medical database of the Framingham Heart Study (which followed thousands of people through decades and several generations to identify factors contributing to cardiovascular diseases), and has now been linked to characteristics as diverse as smoking behavior, alcohol consumption, obesity, cooperation and even levels of loneliness or happiness.

This discovery, already extraordinary, became even more interesting when a study of hunter-gatherers from Tanzania (so a completely different society) found a similar rippling effect of influences, prompting the question of how prevalent was it, and what it meant in practical terms for society.

With this in mind, Pinheiro and colleagues developed a computational approach to study peer influence in networked societies, and used it to investigate the spread of cooperation, opinions and diseases. These examples were chosen because together they largely represent how information/behavior spreads in networked populations. And what they found was astounding - independently of the process studied, peer influence in any social network always reaches 2-3 degrees. This suggested that the range of influence was a quality of the social networks per se, and not related to the processes, what would explain why the patterns in real life situations (like the heart study or the research on the hunters’ tribe) were so similar.

Also surprising was the fact that not only the rule was valid even if the structure of the network changed, but that the only exceptions seemed to occur when people had less contacts (an unexpected result) and when their contacts were friends among themselves (what makes sense). In these cases peer influence was even more far-reaching (although never significantly bigger than 3 degrees).

While it is predictable that we influence our friends’ behavior, these new results tell us that we can actually have an impact on a lot more people everywhere in the world, including complete strangers that will ever know meet, as long as we are somehow linked socially, what is pretty extraordinary.

As the researchers explain “… in medium to large communities, everybody may influence and be influenced by almost everybody else. This is, to many, an astonishing and unexpected result, given the fact that, in all cases studied, information transmission involves only two individuals at a time. Not only our choices are strongly influenced by a large number of people we actually do not know, our influence on them goes well beyond what one would naively expect.”

Together, this apparently universal characteristic of networks and Bacon’s 6-degrees of separation, can completely change the way we see and approach the world, from public-health policies and crime control to the understanding of emotions, the spread of innovation and even warfare.

But the results raise as well many interesting, even philosophical, questions – where is our free will in the middle of this, if we are being influenced by factors that we do not know and can not control? And if we are connected to everyone by 6 steps and can influence 3 degrees of contacts, does that mean that we can influence half of the world?