Robert Cooper
In some Chinese cities, breathing has recently become demonstrably hazardous to your health.  According to the US embassy's monitoring station, air pollution has skipped over unhealthy, exceeded hazardous, and gone straight to " crazy bad".  No, literally.

A "crazy bad" category was programmed into the system's automated twitter feed, presumably assuming it would never be triggered.  "Crazy bad" has now been rebranded as the more reassuring "beyond index".  Whatever you call it, the extreme smog is not only crazy bad for Chinese, it's hurting those across the Pacific as well. You know things are bad when the government gives up calling the toxic clouds "fog", and instead issues official warnings not to go outside.  Such extreme levels make it painfully obvious what damage air pollution actually wreaks.  At Jiangong Hospital in Beijing, respiratory admissions spiked 30% in January.  Smog-induced asthma and cancer will cause suffering for years to come.  Flights were canceled due to low visibility.

Factories were shut as an emergency measure.  No sane tourist dares to visit, let alone go out and shop during the extreme events.  Perhaps the only economic bright spot lies in robust sales of air masks, filters, and - again, seriously - inflatable biodomes and a Chinese version of fresh air in a can.  In an improvement over Mel Brooks' prescient Perri-air, which only came in a single, salt-free Druidia sparkling style, the Chinese canned air comes in multiple flavors such as pristine Tibet, post-industrial Taiwan, and revolutionary Yan'an. 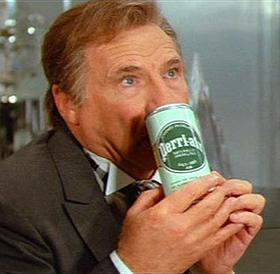 Across the Pacific, it might be tempting to have two reactions about China's air quality problems.  First, isn't China horrible, and second, too bad for them, but doesn't matter for me.  Both reactions would be off base.  China is actually leading the world in renewable energy investment, even while they continue to burn massive amounts of fossil fuels.

Don't forget also that the US and other industrialized nations have had plenty of deadly smog incidents in their own past - there's a reason why the US has a Clean Air Act.  Even while the EPA (Environmental Protection Agency) helps the US keep improving its air, the American Lung Association reports that 40% of Americans still live in counties where air pollution hits unhealthful levels. 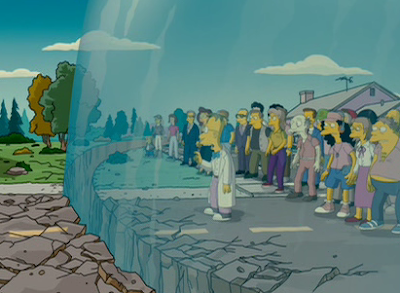 Left: The EPA encloses Springfield in a giant dome to contain its pollution.  Right: Dulwich College encloses its sports facilities in a slightly-less-giant airtight dome to keep Beijing's air pollution out.

As for the "somebody else's problem" reaction, it turns out that a disturbing amount of air pollution wafts over the Pacific ocean and descends upon Americans too, especially those living on the West coast.  A recent modeling study suggested that on particularly bad days in California, air pollution from Asia can contribute around 20% of hazardous ground-level ozone, and is responsible for over half of failing-level ozone days (1).

That was a simulation, but the Asian contribution to air pollution in America can actually be measured by looking at lead isotope levels in airborne particles.  Like canned air, lead comes in different flavors, in this case four different stable isotopes (2).  The coal in Asia has more of one lead isotope than coal in the Americas, so measuring the flavors of lead in American air pollution tells us how much of that pollution came from Asian coal and how much from American coal.

Similar to models, these measurements indicate that in parts of California around 30% of particulate air pollution came from Asia, although this varies over time and space  (3).  So for Americans watching images of smog-choked Chinese cities, don't get too smug.  Air pollution crosses borders through more than just global warming.

Left:  A clean day.  Right: Told you it was crazy bad.