Patrick Lockerby
The Animal That Amplifies Itself


Amplify: to make a thing bigger or more powerful.


The characteristic that most distinguishes humans from our animal cousins is not the use of tools.  Nor is it the use of language.  Many animals use twigs or stones as tools.  Many animals have the ability to communicate alarm, distress, food sources and other matters.

The only thing, I suggest, that clearly separates humans from all other living things is that we are the only species which can amplify its behaviors.  Whatever biological faculty we wish to use we have a machine to amplify that faculty.  We invented machines to enhance our chances of survival.

We don't just use tools: we use machines.  Machines aren't all cogs and gears.  The simplest machine is a lever.  You can do a lot with a lever. 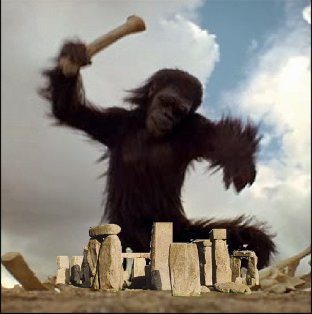 A bird can use a stick to extract a grub from a tree.  A monkey can use a stick for many purposes.  A human can do so much more with a stick.  For a human, a stick is a muscle amplifier.  A boulder that two men couldn't move is moved easily by one man with a suitably long and strong stick.  A primitive ancestor discovering the use of this  muscle amplifier would have an evolutionary advantage.

A liana can be used to make a sling to carry a slung load.  Used as such it is a 'number of hands' amplifier.  A rope can be attached to something that is not easy to grip so that it may be pulled.  It is a grip amplifier.  The ability to make fire is discovered.  Rub two sticks together.  Now use a whipcord.  Make the fire quicker.  You have a speed amplifier.

With the invention of the sling, the bow or the woomera we have an 'arms length' amplifier.  Food animals can be brought down at a greater distance.  The throwing strength is also amplified.  So also is the safety distance.  With a prod or knife, you'd better not miss.  With a bow you can miss and have a good chance of getting away or having another shot.  The ability to 'have another stab' at a food problem must surely have been of great survival value.

A hammer is an impact force amplifier.  If you have invented the hammer or club then you may well discover the use of the wedge.  Splitting wood or something like sandstone is easy once you figure out how to use wedges.

If you've speared something large in the river it makes no sense to try to haul it out over a high bank.  Just tie a rope to it and haul it to a shallow bank, then drag it home.  Congratulations.  You just invented the inclined plane.  The inclined plane is a machine used to lift a mass against the force of gravity.  It is another form of muscle amplifier.

If, needing to feed a large family, you spear a hippo, you may need a little more than an inclined plane.  Take a rope around a tree and get your relatives in on the tug of war.  Getting the meat to the relative safety of a cave by working as a team is a better survival strategy than everyone just diving in on the spot.  Feeding animals make good prey.  Simple tools can amplify not just the muscle of a single person but of a whole team.

Every means that we use to do something that other animals can't can be thought of as an amplifier.  Boats?  Swimming amplifiers.  The history of the human race is a history of a species which has amplified its abilities to feed, to make a home, to protect itself against other species, to protect itself from heat and cold.  By the use of machines we have amplified the boundaries of our biome.  We are the only mammal which can be found living anywhere on the planet.

Here lies a stranger.
He ignored the danger.
He fell through the ice.
You can't do that twice.

Over the years machines were invented to give us ever more power.  The windmill.  The water wheel.  Eventually: the steam engine.

With the invention of the steam engine our amplification of our natural abilities really took off.  Machines could really amplify our muscle power.  Diggers, crushers, pumps, weaving looms.  Trains, steamships.  Eventually, electric power.  Industrialization put great power amplification in the hands of many.  And then came the assembly line and the division of labor. And then came automation.

Oil was discovered at about the time whales were in danger of becoming extinct.  We had a new source of lamp oil.  Coal gas was discovered and piped to homes.  The gasoline and diesel engines were invented.  This gave rise to the automobile and the aeroplane.  We could cover more distance, and faster.

The computer may be thought of as a 'brain power' amplifier.  The first computers were invented to perform numerical tasks faster than a human - or even a team of humans  - could do the job.  Each succeeding generation of computers has amplified our ability to manipulate data.  With each newer computer we can manipulate more data and faster.

The production and consumption of goods in an economy geared to the 'more and faster' model has unfortunate, and largely unforeseen consequences.  We are animals.  That means we are as subject to biological laws as any other species.  All species produce wastes as a by-product of their activities.  There are - can be - no exceptions.  And those wastes are toxic to the species that produce them.  Frequently the wastes are toxic to other species also.  The rate at which a species produces waste is directly related to the rate at which it consumes resources.


We have become the only species on this planet capable of amplifying our own waste production.


In a healthy biome, the wastes of one species form the food of another.  The classic example is the symbiosis between carbon dioxide generators and oxygen generators.  For as long as the system is in balance the CO2 and O2 in the biome fluctuate only within narrow bounds.

We humans are unique amongst animals in another respect.  We have the ability in general  to recycle our own wastes if we so choose.  Instead, we have for too long been producing goods for short term purposes and then just dumping them.  In unregulated economies, goods are produced with a release of wastes into the environment.  They are transported at an environmental cost in exhaust fumes.  They are used perhaps once or twice and then thrown away.

For as long as we have been producing more goods and faster we have been producing more wastes and faster.  In many instances it has been possible to recycle both products and materials.  The sale of second user goods is a major driver of economics.  A buyer at the leading edge of a new technology will offset the cost of a second generation item by selling the old item.

Even though autos and houses enjoy a thriving market, traditional economics doesn't deal with second user goods.  That makes no sense.  In former times a house was built to last hundreds of years.  A nation's stock of buildings was considered to be a part of its wealth.  Today we build to last ten or twenty years.  Buildings which were built to last and which may be one or two or more centuries old are demolished to make way for ephemeral modern structures.  In what way is this progress?

We really need to take our collective foot off the economic gas pedal.  More and faster cannot be sustained.  The only truly sustainable economic model is one wherein we collectively consume minerals, plants, animals and energy at the rate which nature can replace them.  That means a global shared resources energy equivalent of the global insolation. Wind power comes from solar heating, as does wave power.  As does all of our food.  If we continue to demand more energy than the sun provides, and use it faster, we are on a road that leads nowhere fast.

Less and slower doesn't mean a lower standard of living.  It doesn't mean higher taxes.  It means letting engineers do as they have always done: make for a dime what any fool can make for a dollar.  With lower energy consumption in our gadgets, with a sensible policy on electrical energy production and distribution, with a sensible policy on profligate waste versus recycling: by these steps we can pollute our planet less and slower.  We should start doing this now.  We may still have time.
The Chatter Box
More Articles All Articles
About