Caveat:  it may strike the reader from what follows that I have an agendist stance against modern poetry.  I have no quarrel with that assessment.


Quite obviously, science meets poetry in the field of linguistics.  But what if scientists could embrace poetry?  What if a paper in, say, oceanography, were rendered in the media as poetry?  Would the public more readily grasp the core concepts?

As moontide drags her weary way
through ocean, sea, and gulf, and bay ...

I think you see my drift1.


Historically, the whole linguistic point of poetry has been to inspire the reader and to encourage recall by painting a scene using memorable phrases, easy rhythms and rhyme.  During most especially the 20th century, poetry has, in my opinion, lost rhyme, rhythm, poetic turns of phrase, memorability and finally, reason.  For what reason does an article written in ordinary prose get hailed as a prize-worthy poem?

I like to think that I have at least a modicum of skill in reading and writing.  And yet, it must be me that is marching out of step with the whole of literatiland2; for I cannot for the life of me memorise even a single phrase of what counts today as poetry.  Why!  Even by the loosest of the old standards, if a document was written in an easy, flowing style and had memorable turns of phrase, then even a dunce could read it and feel the poetry stirring in his or her soul.

It does not take a genius to recall a very popular example of something that will forever outshine the garbage that passes itself off as today's poetry:

We hold these truths to be self-evident,
that all men are created equal,
that they are endowed by their Creator with certain unalienable Rights,
that among these are Life, Liberty and the pursuit of Happiness.

I am fond of saying of poetry things like "don't analyse it - enjoy it!"  I often think that only linguists should be allowed to analyse poetry - and then only on condition that they don't bore the rest of the world to tears with their results.  Best of all, these analysts should take Longfellow's good advice, and

Read from some humbler poet,
Whose songs gushed from his heart,
As showers from the clouds of summer,
Or tears from the eyelids start;

From "The Day Is Done", Henry Wadsworth Longfellow


Longfellow's poem "The Village Blacksmith" is still very popular globally.  The poem, beginning with the words "Under a spreading chestnut tree" conjures up a vivid image of a village blacksmith working in the shade of a tree.  This poem has been the cause of some controversy over the symbolism of the chestnut tree.

Under a spreading chestnut tree
The village smithy stands;
The smith, a mighty man is he,
With large and sinewy hands;
And the muscles of his brawny arms
Are strong as iron bands.

Longfellow's poem is filled with Christian symbolism, so all notions that the tree in the poem represents some pagan theme are so much twaddle.


One problem with trying to analyse any text is that people forget to view the writing in its whole context.  So, yes, the tree is a global symbol of fertility and ritual and blah, blah, blah.  So what?  The tree also universaly provides a very pleasant microenvironment in which we humans can do what we seem to enjoy most.  Yes, you guessed it: blah, blah, blah.  Many famous people have enjoyed the shade of trees.  They are usually most famous for having blah, blah, blah'd a lot.

Longfellow's poem is a word picture of a rural scene once extremely common in Europe and America, but long since vanished.  The tree provides a shady respite from the heat of the sun, which would otherwise add to the smithy's discomfort from the heat of the forge.  No more.  No less.


Poetry provides a record of the past more colored by the writer's sense of wonder than the historian's sense of being accepted as accurate by the target audience.

Accuracy is the major stumbling block to anyone who would dare to write in poetry for a scientific audience.  I wrote the following poem about 1966.  It is cosmologically inaccurate.  But if it encourages just one of my readers to take up the study of astronomy then I hope that the scientific inaccuracy may be forgiven by my other readers.


THE MIRACLE OF BIRTH

As photons strike in head-on cataclysmic smash
raw energy forms matter as a subatomic ash.
For timeless time, the ashes grow to mists
then gravity condenses them in its titanic fists.
A billion years creation to achieve one tiny ball
with which the laws of nature play
their game of cosmic pool.

Bowing in their turn before the gravitational might
some atoms bond together as a micro - meteorite,
and these in turn accumulate and bond as solid rocks
and orbits start, a centre forms, a system interlocks.

Dust settles down continuously, but Nature is unfair
the central rock, the biggest one
receives the lion's share.
The mass increases, pressure builds,
then Nature's work is done
as planets orbit round a brilliant incandescent sun. 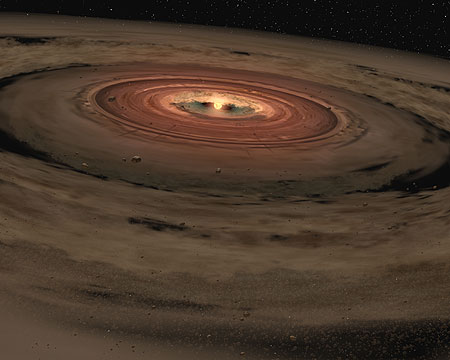 [2] - a scholarly meritocracy.  By extension, any group of like-minded intellectuals or pseudo-intellectuals.
The Chatter Box
More Articles All Articles
About