Tweet
George Luber, who ran the climate and health program at the Centers for Disease Control and Prevention before only being allowed in the office accompanied by an armed guard since May, is touted as a climate scientist by Reuters, but he is an epidemiologist. He got his degree in anthropology, a social science.

Reuters can be forgiven for not knowing the difference, they are often in a rush to get basic facts wrong and their readers must not mind if they can slam the Trump administration because an employee has gone bananas.

None of that is to say epidemiology is not valuable, without it we could not have learned smoking is bad for you, nor am I knocking anthropology, and the health impact risks of future climate change is an important topic, but it is not more important than also doing the job CDC needs done.

As part of a reorganization, Luber was offered the top job in a combined asthma and human health group but he balked, suggesting his group had specifically been given $10 million to talk about global warming's risk to public health infrastructure and how mosquitoes might move north if temperatures rise. Asthma risk has a great deal to do with air quality, but that didn't seem to interest him. It angered him, judging by his behavior. 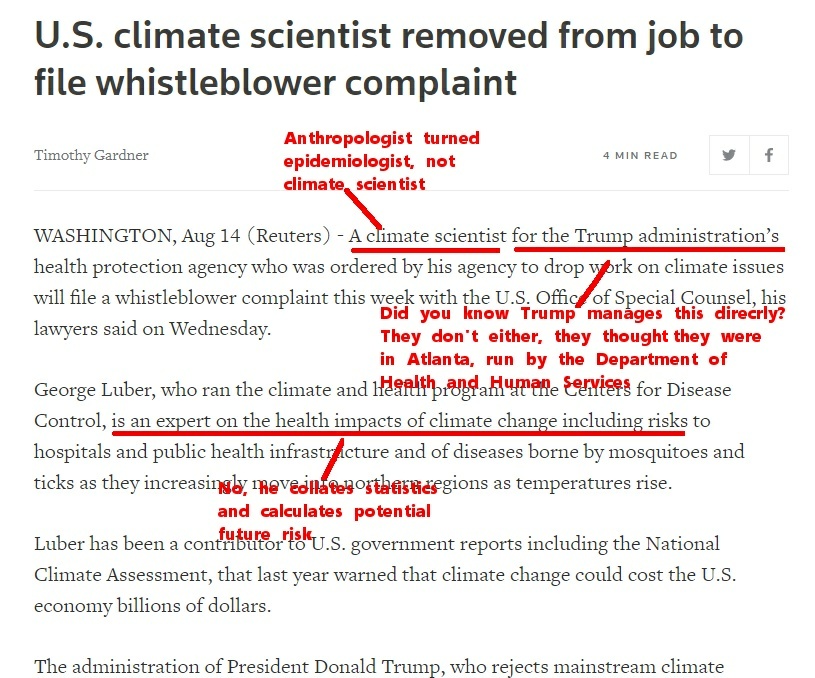 How many times did Reuters specifically suggest an employee was directly targeted by President Obama when CDC departments were combined?

The CDC is like any organization, when you start hinting your bosses are engaged in illegal conduct and misuse of federal funds, they are going to escort you from the building while the matter is resolved.  It had to have been an odd meeting if he actually claimed Congress specifically singled him out to discuss global warming during meetings over the $242 billion HHS budget.

What happened next was so odd that anyone with expertise in personnel issues would conclude they'd had enough of him long before then, offering him the top job in the merged group was likely some sort of seniority government check-off box, because they noted he had refused to sign ethical declarations since 2014 and had written a book in 2013 without clearance.

Now he's suing, claiming that bringing up his documented personnel issues is retaliation.

He's probably suspended 120 days without pay but he may have found a new career that is more constructive than an anthropologist talking about global warming - claiming whistleblower status against the Trump administration. Reuters and Washington Post (they also claim he is a climate scientist rather than an epidemiologist) seem to love that. He instead wants to return to talking about risks of climate change inside CDC and his lawyer says that "the complaint seeks to restore Luber’s reputation as a scientist."

If we are worried about trust in science, journalists should stop claiming everyone who talks about climate science is a climate scientist. He's an epidemiologist, perhaps a very fine one, but that's hard to know when your name is on 60 papers and you have 18 employees doing the work, but what is known is that he got a job there in 2002. That is a good gig for a social scientist. If CDC wants to make sure employees are tackling things within their mandate, well, it's about time.