Tweet
Religion and mental health seems to be a double-edged sword. Religion features in a lot of psychotic delusions, but there's also a lot of evidence linking religious belief to better mental health. There's some new research which suggests that part of the problem in teasing out the relationships is that it's not belief itself, but rather the type of god that you believe in, that matters.

The data came from a 2004 US survey on religion and health, which included measures of what people thought about god, and also a variety of health measures including some standard psychiatric scales.

The researchers took out all those who said they had no religion (just 3%). What's more they found no effect of how religious people said they were, or how often they went to church. So this is not a study comparing religion with nonbelief.

The essence of what they found is shown in the graph.

They looked at whether people agreed with each of three statements describing god: 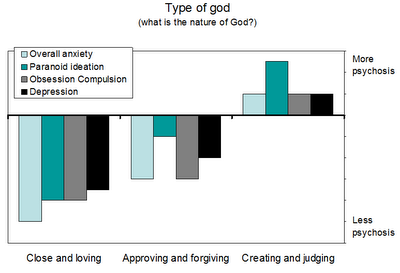 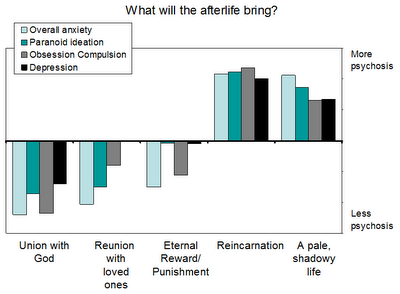 Believers in a close and loving god had the lowest incidence of a range of psychoses, especially anxiety. Belief in a creator/judge god had the opposite effect.

So what's going on? Of course there's a significant chicken and egg problem here. Is it that particular religious beliefs making people less psychotic, or is it simply that psychotic people have negative opinions of both other people and of god?

But Kevin Flannelly, the lead researcher, has a theory to explain these results. He suggests that there is a system in the brain that's specifically designed to alert you to threats in the environment around you (the Evolutionary Threat Assessment System, or ETAS).

Dysfunction of this system, he believes, underpins a lot of mental health problems. The idea is that activation of the ETAS causes a decrease in the sense of security and also an increase in psychiatric symptoms.

Flannelly thinks that belief in a close and loving god (i.e. a protective one that's looking out for you)  decreases activation of the ETAS.

To be sure, alternative theories abound - in particular attachment theory, which suggests that God acts as a surrogate parent. But this doesn't explain why belief in a loving god does not reduce somatisation.

Whatever the cause, Flannelly's results are further evidence that positive beliefs about God are linked to less psychosis, especially anxiety-related psychosis (see also Xanax of the people)

Tom, an Australian national, lives in Brighton, on the south coast of England. He graduated from Southampton University with a BSc in physiology...