Johannes Koelman
It is approaching fast. And it is big. The next NEO (Near-Earth Object) encounter that is. This Tuesday, a 400 m (1,300 ft) diameter rock, known as 2005 YU55, will pass by earth at a distance that is from astronomical perspective truly minuscule: 0.00217 AU. In a solar system that stretches more than 80 AU in diameter, that is less than a hair width. Such close encounters for objects of this size are expected to occur no more than a few times per century. 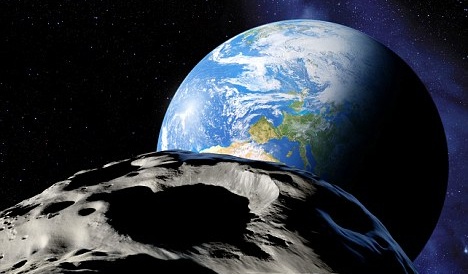 Earth, keep starboard - we are going to pass!

The last time an event like this happened was 35 years ago. End December 1976 a 200 m diameter asteroid passed earth at a distance even smaller than the distance we will witness this Tuesday. At that time there was no internet and no hype surrounding the near miss. No doomsday scenarios featured in the news. No radio station and no newspaper mentioned the event. In fact, they could impossibly have done so. No person, and certainly no single astronomer noticed the near miss. This 200 m diameter piece of rock continued barreling through the solar system unnoticed for the next 34 years. It was only last year that this asteroid was finally discovered. Being spotted for the first time in the early half of December 2010, this NEO carries the label 2010 XC15 (where the first letter 'X' denotes discovery in the 23rd half month, and the subsequent characters 'C15' indicate it was discovery number 278 in that particular half month). We only know about the close encounter 35 years ago because of our capability to predict (and postdict) close encounters based on Newton's laws of gravity.

Wait a second. This can't be right. We clearly don't know our solar system.  You just told us we are currently discovering asteroids at a rate of hundreds per month. There must be many thousands of asteroids that we don't know of, and those will gravitationally interact with all other rocks and planets in the solar system and disturb their trajectories. Don't tell me you scientist can accurately predict close encounters. That is logically impossible. In fact, now that I am contemplating these issues, why should I believe you that 2005 YU55 is going to miss us in two days time?

That's a healthy challenge. Countering it, will allow me to cut through the heart of irrational fears related to NEOs. Key part of the answer is the fact that our solar system is a very large and very empty place. So first we need to build some intuition for the scale and distances of the bodies populating the solar system.

To get a feel for proportions, let us scale down the solar system and everything in it by a factor of a million. Under this rescaling, our earth becomes a pale blue sphere of 13 m (42 ft) diameter. That is roughly the size of a decent house. The moon reduces to a 3.5 m (11 ft) diameter sphere, circling around the house at a distance of 365 m (1,200 ft). So we can imagine the moon as a car driving in a circle close to half a mile in diameter centered around the house. At a distance of 150 km (93 mi) a giant 1.4 km (0.9 mi) diameter mountain of fire is illuminating the whole scene.

So now picture 2005 YU55. Applying our rescaling, this mighty asteroid is reduced to a grain of sand with diameter of 0.4 mm or 1/64th of an inch. Imagine this sand grain circling at great distances around the mountain of fire. On 8th November 2011 this grain gets close to the lonely pale blue house located at a one and a half hours drive from the mountain of fire. In fact, it gets very close and zips by high in the air at a distance of no more than 325 m (1,100 ft). 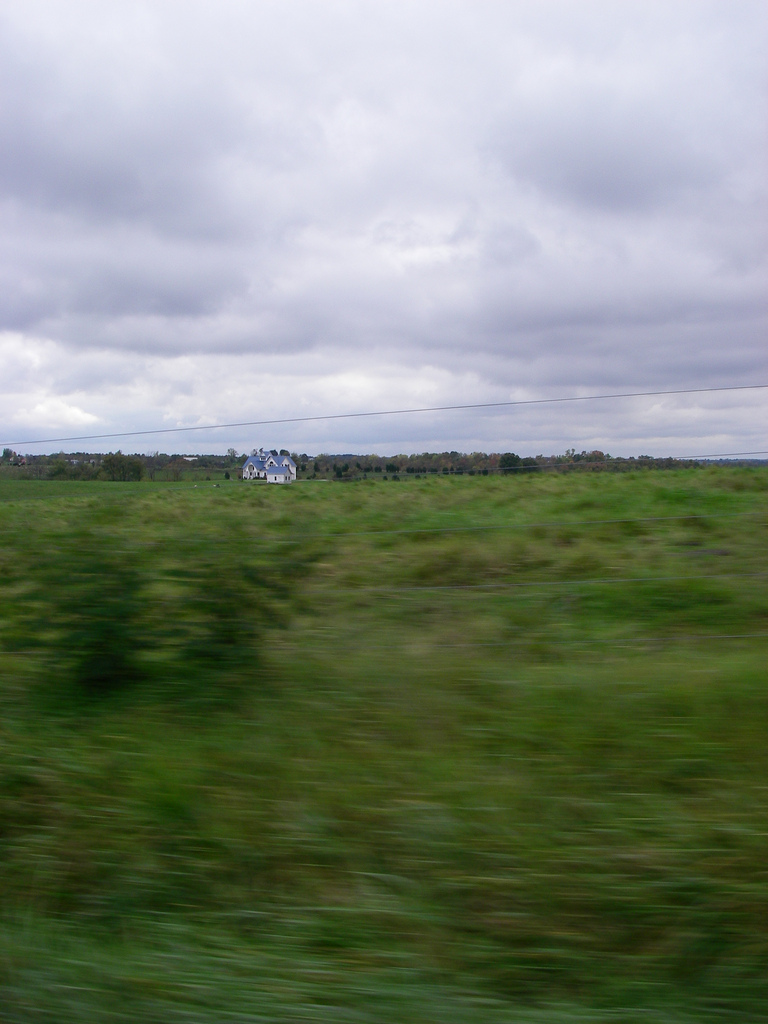 Would the inhabitants of the house get the shock of their life? Would they feel they narrowly escaped an Armageddon? I don't think so. If no one tells them in advance what is going to happen, it would be a day like any other. And even if someone informs them in advance, they would not be able to notice anything. A grain of sand zipping by at 1/3 km (1/5 mi) distance is not the easiest target to spot. Even if they were told where to look and even if they would bring their best binoculars, the inhabitants would likely be disappointed. No intruder to spot. And that is what you will experience if on the evening of November 8th you try to spot 2005 YU55. We can call it a near miss, but it represents a miss that in terms of observability is very remote.

Another way to place the 'near miss' label in context, is to consider the likelihood of grains of sand passing within a distance smaller than the distance to the car, actually hitting the house. What if the only piece of information we have for future sand grain encounters is that they will pass within a distance smaller than the distance from the house to the car (365 m or 1,200 ft)? What chance of a hit to the house would that equate to? That chance can be calculated as a chance of about 1 hit for every 3,000 misses.

Clearly, classifying approaches within a lunar distance as near misses represents somewhat of a stretch. Yet, it is a convenient measure, and as already mentioned: when applying this classification, only a few sand grain events per century will be classified as near misses. We will likely witness many of them before the first real hit. But if it comes, we will be prepared as we can predict NEO trajectories much better than "it will approach earth within a moon's distance".

So what are the prospects? What near misses can we expect in the future?

You need to be patient. It will not be before 2028 until the next sizable asteroid (2001 WN5) will get within lunar distance to the earth. But it will be worth the wait. Compared to 2005 YU55 this asteroid is considerably larger and it will approach earth at a closer distance. In terms of the 'blue house analogy' we are talking here about a millimeter sized sand grain missing our house by only 250 meters. This event will happen on June 26 2028, and you might spot it with a good pair of binoculars.

Now back to the issue of solar dynamics calculations. Should you believe these predictions? How can these scientists reliably compute trajectories of planets and asteroids up to tens of years and even centuries into the future if we have not even spotted all the content of our solar system?

The answer lies in  the vast emptiness of our solar system. Yes, there are a lot of objects in our solar system whose trajectory is not very well known, and there are also lots of objects we have not even discovered yet. However, these objects are very small compared to the sun and the planets, and they have negligible influence on the short term (say less than a century ahead) dynamics of the other objects. And what is more important: if we haven't spotted them, the are not only small, but also following trajectories that so far remain distant from earth's trajectory.

In terms of our 'blue house analogy': we know very precisely the relative positions of the mountain of fire and the halls, houses and sheds scattered in the vast emptiness around it. We also know the positions of the cars circling these buildings. Using newton's laws, we can compute ahead in time how all these objects influence each others positions. The result is a set of predicted trajectories for the most massive objects in our solar system.

Obviously, smaller objects are also present. We have spotted pebbles and lots of sand grains. Key is that we can add these objects into the calculations, and compute the trajectories of these minor objects given the trajectories and force fields of the massive objects: the mountain of fire, the various buildings and the cars. We can subsequently back calculate how the predicted movements of all the sand grains influences the positions of the buildings and cars, but it should come as no surprise that the positions of these objects is hardly influenced by some sand grains. 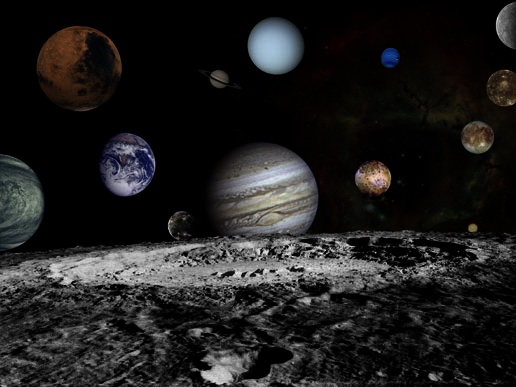 If our solar system was anywhere as crowded as depicted here, impacts would be frequent and more difficult to predict. If intelligent life would originate on one of the planets, it would not last long.

Now you might have heard that the solar system dynamics is highly chaotic and therefore unpredictable. That is true, but such a remark is meaningful only if a timescale is attached to it. When considering chaotic behavior, the solar system is not different from our weather system. As we all know, the latter is a highly chaotic system, yet it is feasible to make reliable predictions of tomorrows weather. The point is that for our solar system, a century ahead is tomorrow. Deterministic chaos starts to play a prominent role in the solar system dynamics only after much longer (typically millions of years) timescales.

The easy computability of planetary and asteroid dynamics could very well be a feature in our theories that will make mankind survive in a more distant future. After all, we are tiny microbes living on the outside walls of a pale blue house. A sand grain hitting the house could hurt us tremendously if it happens at a spot crowded by millions of microbes.
The hammock physicist
More Articles All Articles
About