On February 28, 2007, NASA's New Horizons spacecraft made its closest approach to Jupiter on its ultimate journey to Pluto. This flyby gave scientists a unique opportunity to study Jupiter using the package of instruments available on New Horizons, while coordinating observations from both space- and ground-based telescopes including NASA's Chandra X-ray Observatory. 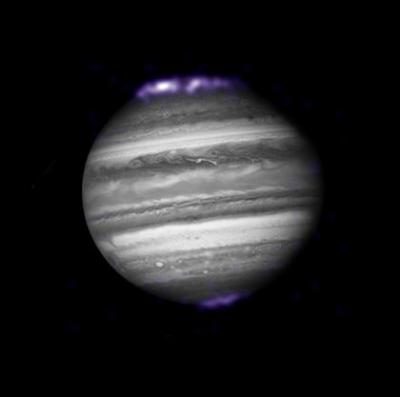 In preparation for New Horizon's approach of Jupiter, Chandra took 5-hour exposures of Jupiter on Feb. 8, 10 and 24. In this new composite image, data from those separate Chandra's observations were combined, and then superimposed on the latest image of Jupiter from the Hubble Space Telescope. Credit: X-ray: NASA/CXC/SwRI/R.Gladstone et al.; Optical: NASA/ESA/Boston Univ./J.Clarke & Hubble Heritage (AURA/STScI)

In preparation for New Horizon's approach of Jupiter, Chandra took 5-hour exposures of Jupiter on February 8, 10, and 24th. In this new composite image, data from those separate Chandra's observations were combined, and then superimposed on the latest image of Jupiter from the Hubble Space Telescope.

The purpose of the Chandra observations is to study the powerful X-ray aurorae observed near the poles of Jupiter. These are thought to be caused by the interaction of sulfur and oxygen ions in the outer regions of the Jovian magnetic field with particles flowing away from the Sun in the so-called solar wind. Scientists would like to better understand the details of this process, which produces aurorae up to a thousand times more powerful than similar aurorae seen on Earth.

Following closest approach on the 28th, Chandra will continue to observe Jupiter over the next few weeks. New Horizons will take an unusual trajectory past Jupiter that takes it directly down the so-called magnetic tail of the planet, a region where no spacecraft has gone before. The sulfur and oxygen particles that dominate Jupiter's magnetosphere and originate in Io's volcanoes are eventually lost down this magnetic tail. One goal of the Chandra observations is to see if any of the X-ray auroral emissions are related to this process.

By combining Chandra observations with the New Horizons data, plus ultraviolet information from NASA's Hubble Space Telescope and FUSE satellite, and optical data from ground-based telescopes, astronomers hope to get a more complete picture of Jupiter's complicated system of particles and magnetic fields and energetic particles. In the weeks and months to come, astronomers will undertake detailed analysis of this bounty of data.

Written from a news release by Chandra X-ray Center.